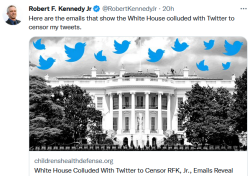 Citing documents and emails between social media employees and White House officials, Bailey exposed how the White House sought to censor Kennedy for a tweet questioning “suspicious” deaths of elderly individuals after receiving the COVID-19 vaccine and seeking a good faith investigation into the true causes of the deaths.

Read more here at The Defender.

Lies My Government Told Me And The Better Future Coming By Dr. Robert Malone

With contributed chapters from other leading thinkers, such as Dr. Paul Marik and Professor Mattias Desmet, and drawing upon history, psychology, and economics, Lies My Gov’t Told Me looks at COVID from numerous angles. Never satisfied with a simple answer or easy solution, Dr. Malone proposes multiple action plans for a better future.

Cause Unknown By Ed Dowd

According to the studies suppressed by Coleen Boyle, & that William Thompson pointed Dr Hooker toward, I would say the sharpie is pointedly black.

Another brave warrior the UK Pharma puppet Government are trying to use the sharpie on..

Rishi Sunak leads condemnation of Tory MP who claimed Covid vaccine was 'the biggest crime against humanity since the Holocaust': Andrew Bridgen is suspended by party for anti-vaxxer Twitter rant and warned he may have 'blood on his hands'
Andrew Bridgen shared an article on the Pfizer and Moderna jabs on Twitter
MP compared use of jabs to 'biggest crime against humanity' since Holocaust
Chief whip Simon Hart said his comment 'crossed the line' and removed whip

Rishi Sunak has slammed the 'utterly unacceptable' actions of a Tory MP who compared the Covid vaccine rollout to the Holocaust.

Andrew Bridgen was stripped of the party whip after an astonishing outburst on Twitter that led to widespread condemnation from politicians, Jewish groups and medical experts.

The MP for North West Leicestershire has made a series of anti-vaxxer claims on social media and in the Commons chamber in recent weeks.