SPELLERS has documented a miracle 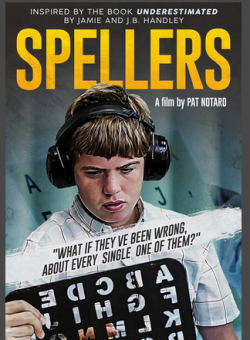 We're pleased to share this emotional review of Spellers, The Movie, by Levi Quackenboss. Subscribe to the Substack here.

SPELLERS has documented a miracle

For my friend, JB Handley, and his champion speller, Jamie.

I know you all will ask when and where you can see this life-changing film. I’ve heard rumors that it’s launching April 2nd, on World Autism Day. Stay tuned, I’ll let you know how see it. In the meantime, follow the SPELLERS Instagram and sign up for the SPELLERS mailing list for news.

When the opening scenes of SPELLERS began, for a moment I doubted that I would make it through the film that day. JB Handley has been many things to me in our seven-year friendship. A force. A shield. A contributor, a voice, a friend. A big, strong, soft-hearted human in need. A ray of hope who needs an occasional spiritual pep talk to make it through a dark day. I haven't met JB's son, Jamie, but I've said a few words to him when JB puts our calls on speaker. JB tells me about Jamie's big smile as he listens. Jamie is autistic and doesn't talk, and he's been that way since he was a toddler.

The film opens with another young man, Cade Larson, filled with joy, cruising past the camera on a surfboard.

I've had the pleasure of spending several days with Cade, over a couple of trips. My children have sat with him at the dinner table, munching on tater tots at the country club near his Minnesota home. Cade is also autistic and has echolalia but otherwise doesn't speak. While he helplessly repeats everything said to him, you know he means "yes" with the enthusiasm he infuses into his echos. Yes, he wants all of us to go on the boat. Yes, he wants two orders of tater tots for dinner tonight. No, he doesn't want the dogs around.

Then, the first mother to speak, is April Boden. That's when I considered turning the movie off because it all feels like too much right now.

I don't personally know April in real life. Although we talked, years ago, about having a phone call, it never came to be. April was best friends with Liam Scheff. She was with him as he suffered through the physical debilitation that ultimately led him to take his life in order to end the unbearable suffering. I've written about Liam in the past, and, in fact, just reposted something about him a few days ago. Liam has been on my mind, endlessly, for the last two weeks. I've thought about Liam too many times to count since COVID took over all of our lives, and I've desperately wanted to know what he would have to say about it all. And here, in the middle of all of that, is his best friend and her autistic son on my computer screen. More than anything, I wish Liam was here to see this miracle revealing itself in April's life.

When JB called three years ago, to tell me about the breakthrough his son had with the Spelling to Communicate (S2C) program, I simultaneously fell to pieces over my mistaken beliefs, and rejoiced for his family, and all of the families who would benefit from his personal discovery, and the platform from which he would launch it. Imagine believing, as I wholeheartedly believed for a decade, that autistic people had an average IQ of 70. Imagine believing that about your own child. Sit for a moment with the guilt and the regret these parents feel.

Then imagine the unraveling, the blossoming, and the new beginning that happens when they, for the very first time, reap the benefits of being shown just how wrong they were.

In November of 2020, JB sent a PDF of the final version of his book this movie is based on, written with Jamie and called Underestimated. It was about the wild ride they were on with communication and their whole new father-son relationship. I turned into a blubbering mess all over again. "Not a page went by without tears in my eyes," I wrote back. "There is no other way to be while watching a miracle unfold."

Spelling to Communicate is founded on the premise that autistic people are free of cognitive impairment; it’s their motor planning that has been damaged. Speech is 100% motor planning, but not language. Language is cognitive. Think of someone you know who’s suffered a stroke and lost the ability to speak the way they used to. You plainly see they’re struggling to get the words out, but you don’t doubt for a moment that they have the words. The language is there for them. And the language is there for autistic people, too. Across the board.

Aren’t you so tired of this same old trope? The billion dollar industries of speech pathology and Applied Behavior Analysis (ABA) don’t want the truth coming out. I do hope you take that into consideration today and tell every single person in your life about this upcoming film.

In one scene towards the end of the film, Cade said, "I'm good at this and will become independent." When asked, "What do we need to help non-speakers?" Cade answered, "I think knowing that we are intelligent and treating us with respect helps."

I remember when I spoke to Cade, years ago. I used that sing-song tone that I haven't used with my own kids since they were toddlers. He was an 18-year-old young man. I want to crawl under a rock.

Cade, if your mother shows you this review, I want you to know that I am sorry. You are an intelligent young man and I didn't speak to you in the way you deserve to be spoken to. I didn't presume your intelligence or your competence and I am so, so sorry.

In my favorite scene, Sid, a non-speaking boy in Portland, Oregon, who has both autism and Down Syndrome, when asked, "Can you control your thoughts?" spelled out, "I'm a rudderless ship in the sea of thought."

I’ll say it again: these kids are poets.

There are tens of millions of people in the world who have no voice because we haven't been listening, and their parents have lost hope.

Let’s open the floodgates and let the hope out.

You can donate to sponsor a speller for five sessions by giving here. Any amount you give makes a difference.

Ed Dowd's Cause Unknown can't be updated fast enough as we see a steady stream of sudden heart attacks and deaths in the news. Dr. Robert Malone's Lies My Government Told Me and the Better Future Coming speaks to the power of action and personal growth based on knowledge.