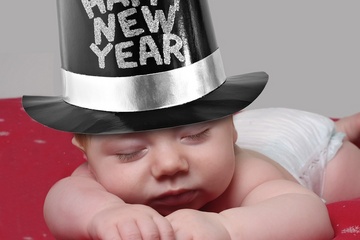 What will the future look like for babies born in 2023? That's why we're here. And feeling as old as Father Time. Happy New Year, friends. Thanks for your readership and support.

Jacques Attali is he still alive?
Maybe he is some where being taken care of family, wearing diapers?
I wonder how he feels about it all now?
In his little flash of light; life?

Stunningly prophetic, isn't it?
It was posted by a reader from this equally stunning news story:

Wow, what a quote you posted!

"Jacques Attali was an advisor to François Mitterrand (former President of France) and wrote this in 1981.

This fragment is excerpted from his book “Brief History of the Future”, published in France in 2006:

“In the future it will be a question of finding a way to reduce the population. We will start with the old man, because once he is over 60-65 years old, man lives longer than he produces and it costs society dearly.

Then the weak and then the useless who do not contribute anything to society because there will be more and more, and especially finally the stupid.

Euthanasia directed at these groups; euthanasia must be an essential instrument of our future societies, in all cases. Of course, we will not be able to execute people or organize camps. We will get rid of them by making them believe that it is for their own good.

Too large a population, and for the most part unnecessary, is something economically too expensive. Socially, it is also much better for the human machine to stop abruptly rather than gradually deteriorate.

We won’t be able to pass intelligence tests on millions and millions of people, you can imagine!

We will find something or cause it; a pandemic that targets certain people, a real economic crisis or not, a virus that will affect the old or the elderly, it does not matter, the weak and the fearful will succumb. The stupid will believe it and ask to be treated.

We will have taken care of having planned the treatment, a treatment that will be the solution.

The selection of idiots will therefore be done by itself: they will go to the slaughterhouse alone.”"

Happy New Year everyone , cheers to the future.

They have some Republican senators standing up against making McCarthy speaker of the House. HE seems all reasonable, but there has been many things that he could have follow through with and has not. Tucker Carlson reported back - some time ago- that he has a funny living arrangement with GOP pollster Luntz. We all know how those pollsters used their position as a voting influence, and not as honest reporting. Luntz was very anti Trump.

Politically I was for Trump really a lot. I still see Trump as an outsider of the corrupt, only interested in filling their pockets, keeping their power; Washington bunch. If you don't think so, see how Trump was dealt with.

Lower down on his list was vaccine safety. He did believe in it. He made sure that the leaders of the vaccine safety movement got to sit down with heads of the NIH.

So Trump missed that one thing to put at the top; big time.

Did he miss it because there was not enough Americans that could see it? It does amaze me that after all this time, and so many children hurt that there are so many clueless idiots out there.

Idiots all; I might not have know what was going on back in the 70s, and 80s but after the internet there should have been some smarting up by the American people through the 90s and by 2003 Dan Burton's Congressional hearing should have made the whole thing at the top of the heap of important things.

Instead we get health insurance as the top of the heap, that voted in across the board Democrats.
We almost went to socialized medicine. Canada is doing so well with that.

Happy New Year. With Prayers all around for a good House Speaker that is for the American People.