Home Donate Contact Us Special Reports Science Email Subscription 2021 RSS Feed 2021 Our Mission
Not Free to Say No
The Cage Has a Door: Twitter

The Ghost of Autism Past, Present & Future 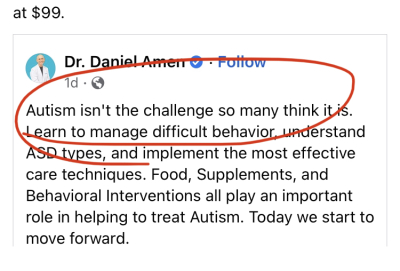 Look at these two ads for seminars by Dr. Daniel Amen, one for autism, one for concussion (scroll down.) Read the first sentence of each.

Autism isn't the challenge many think it is.
Concussions can be terrifying.

Autism can be terrifying.
Concussions aren't the challenge many think they are.

Autism families get a swift gaslighting, while concussion families are acknowledged. Autism gets

"care techniques." Concussion gets healing.  The seminars might be fantastic. The first impression is not. I'd like to suggest a book for the marketing team, at least.  DENIAL How Refusing to Face the Facts about Our Autism Epidemic Hurts Children, Families, and Our Future  written by Dan Olmsted and Mark Blaxill in 2017. 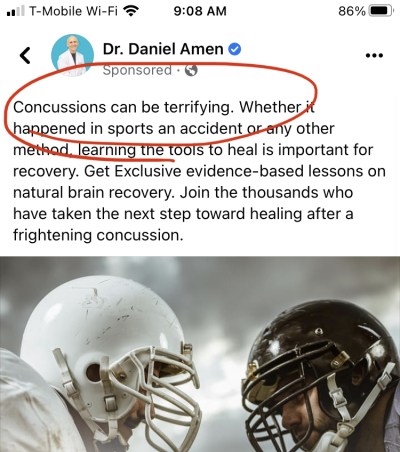 The Truth about Wuhan: How I Uncovered the Biggest Lie in History

By Andrew Huff: The day that Dr. Andrew G. Huff left his senior scientist and vice president role at EcoHealth Alliance was one of the happiest days of his life due to the corruption he had witnessed at the organization. However, he never thought working there would be of any great consequence to the future. He was wrong. Because, as an EcoHealth Alliance insider, Dr. Huff had had a ringside seat to one of the biggest cover-ups in history.

Terrifying effects/A.I./A.R. demons/creatures attacking and loafing around with the vaxxed? Sudden psych hospitalizations after vaxxines in kids as young as toddlers! One "blessing" after another "blessing" according to the psych hospital industry and vaccine industry. I'll never take any of the "blessings" nor jabs.

Beyond disappointing.
His tools could be a help to this community.

We should make autism's challenges, especially in the severely/profoundly affected, known to the Neurodiversity community without offending them/them threatening to take us down. Parent's letters style articles describing a day/week/month in the life of their ASD child(ren). ASD is a cruel game. Speaking of games, this NB-pushing, "diversity inclusive" Wind Waker bootleg - Lil' Gator - is being approved by Nintendo as they bash their classic/Japanese video game fans' requests for classic and previously Japan exclusive kids games, and censor/take down fanmade games even by their customers - Nintendo is another "player" of the ASD romanticism movement? https://www.msn.com/en-us/entertainment/gaming/lil-gator-game-s-non-binary-differently-abled-representation-is-true-to-its-characters/ar-AA159FNT?ocid=msedgntp&cvid=db36e65bbc154c4381f2dcdcf52db368

"Hikari To Tomoni/With The Light" had very tear-inducing depictions of severe autism, even a grown man could cry from it. And Sensory Processing/hellish sensory and GI/food issues are being romanticised too.

I just wish that the same doctors/scientists who have worked hard and sacrificed to expose the dangers of the Covid jab would do the same thorough investigation on the safety of the CDC recommended childhood vaccines list. Especially since they are trying to add the Covid jab to it.

Yes, once again they are downplaying the seriousness and extreme challenges of having a child/adult with autism. They are saying treat the concussion and just live with the autism. This is outrageous and totally unacceptable and grossly unfair to people with the autism illness. We need research from qualified people in the field to uncover a true cure for the illness and condition of autism NOW!

This is a disappointing switch. I remember when Dr. Amen/Amen Clinics was a speaker and sponsor at the GR Autism Education Summit a few short years ago. The concussion paragraph could have easily been the autism one with words like recovery and healing. I have to wonder if the switch occurred due to the negativity that has surrounded trying to recover and heal autism that has been so prevalent in the self advocacy group. Or did autism families not find success with his expensive scans and supplements? Something to ponder.