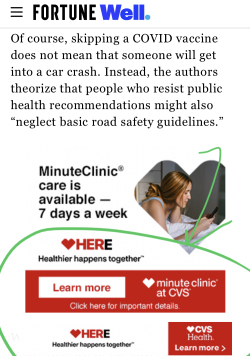 People who skipped their COVID vaccine are at higher risk of traffic accidents, according to a new study. People who resist public health recommendations might also neglect basic road safety guidelines.”

Have you ever read such nonsense as this? Fortune Magazine delights in sharing this horsepucky. Here's a THOUGHT! Maybe the people who hesitate to take a brand new, untested product being jammed down their throats pay MORE attention to safety. Perhaps they are critical  thinkers who can even remember what to do at a 4 way stop and a rotary! Another idea? 16 - 25 year olds are vaccinated at lower rates than 50+ and guess who has more accidents? Tick tock think think. Articles like this are meant to create boogeymen and women, incite hate and fear. EXACTLY what the media screams about all day long. But acceptable for Covid. And vaccinations. And check out the featured sponsor. It's enough to drive you to.....

People who skipped their COVID vaccine are at higher risk of traffic accidents, according to a new study

If you passed on getting the COVID vaccine, you might be a lot more likely to get into a car crash.

Or at least those are the findings of a new study published this month in The American Journal of Medicine. During the summer of 2021, Canadian researchers examined the encrypted government-held records of more than 11 million adults, 16% of whom hadn’t received the COVID vaccine.

They found that the unvaccinated people were 72% more likely to be involved in a severe traffic crash—in which at least one person was transported to the hospital—than those who were vaccinated. That’s similar to the increased risk of car crashes for people with sleep apnea, though only about half that of people who abuse alcohol, researchers found. Read the nonsense here.

My theory is that some actuary figured out that covaxxed are suddenly collapsing while driving and before that could be released they designed this study to prove the opposite.

What's the bounty at these days to find the first non vaccinated autistic...no shots no autism no illness.

My favorite is that one has a greater risk of harm while driving to the doctor to get a vaccine than not getting vaccinated.

If you read the actual "study, there are a number of extremely odd decisions by the authors.

1). Pedestrians and passengers were included in their "traffic crash" data.

2) The authors noted that the unvaccinated study subjects were more likely to live in rural areas, but failed to mention Canadian traffic crash data showing 2/3 of serious traffic accidents occur in rural area.

3) The authors noted that the unvaccinated in their study were LESS likely to to have sleep apnea, diabetes, cancer, or dementia; it is unclear why they chose to study a correlation with traffic accidents (which can be explained by geographical demographics alone, nothing to do with vaccination), rather than cancer, diabete, or dementia.

Could dementia contribute to vaccine hesitancy, could receiving a covid vaccine increase the risk of dementia, or --? And the same questions should have been posed for diabetes, sleep apnea, and cancer as well.

Wouldn't the Canada traffic data alone be reason to retract the study?

Surely it's unconscionable for the authors to emphasize a specious finding while failing to suggest a need to explore several other disturbing findings in their own data.