Home Donate Contact Us Special Reports Science Email Subscription 2021 RSS Feed 2021 Our Mission
Book Debut: The Truth about Wuhan: How I Uncovered the Biggest Lie in History
Bob McGrath Was Important in Our Neighborhood

American Academy of Pediatricians: Have a Coke and a Shot Kid! 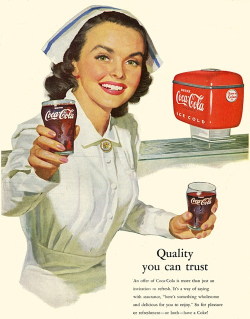 Holy high fructose corn syrup! Children's Health Defense's THE DEFENDER has an article that exposes yet more twisted truth about The American Academy of Pediatrics. The company that once "Liked to teach he world to sing, in perfect harmony," funds pediatric healthcare (not to be confused with health.) Many years ago, I was at Yale Pediatrics, and appalled by the row of vending machines loaded with junk food and soda. A glass of soda, back when it was at most, 8 ounces and made with sugar, was a refreshing treat. The Big Food (such as it is food) Industry is so intertwined with healthcare, it's impossible to separate them. As an aside, if you haven't watched "Pepsi, Where's My Jet,"on Netflix,  I recommend it.

Coca-Cola: American Academy of Pediatrics a ‘Great Partner of Ours’

The Truth about Wuhan: How I Uncovered the Biggest Lie in History

The paper is based on documents uncovered through 22 Freedom of Information requests by the nonprofit investigative research group U.S. Right to Know.

The paper is co-authored by U.S. Right to Know with researchers from the University of Cambridge and Bocconi University.

The documents show a Coca-Cola vice president stating that, “As you know AAP [American Academy of Pediatrics] is a great partner of ours…”

The researchers found, “On multiple occasions, Coca-Cola supported and selected conference speakers without being listed as an official sponsor, and without researchers declaring how their participation was funded.” We found both direct Coca-Cola funding and the use of third-party conduits.

“By sponsoring conferences, Coca-Cola can directly shape what is included and not included in conference proceedings. This is of tremendous value to the company. It can promote its own favoured solutions to obesity and public health nutrition more widely. It can also shape the narrative about what constitutes appropriate interventions.”

The researchers recommend that “There should be robust financial and conflict-of-interest disclosures for public health conferences, not only for the conference organisers, but also for speakers.” And that “Such corporate-sponsored events should be viewed as instruments of industry marketing.”

The co-authors of the paper are Jónas Atli Gunnarsson, Gary Ruskin, David Stuckler and Sarah Steele.

Over the years I’ve heard it speculated many times that John D Rockerfeller played a major role in dismantling (what we call today) holistic health care. I don’t know to what degree that is true, however, I do know that petroleum based products have wreaked havoc on human health. Wouldn’t it be a wonder if today’s tycoon would use a certain $44 billion app to build back up the science that actually makes us healthier?! Also, seems the new house leadership is focused on exempting soldiers from Covid mandates. Hoorah! The Democratic wing of the corporate, war-mongering, duopoly is up in arms (pun intended) over the GOP holding the NDAA hostage. I’m old enough to remember when the “left” was trying to protect our soldiers from Pharma: