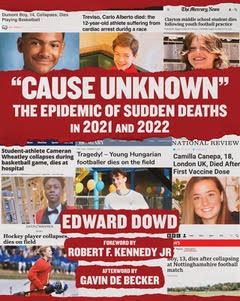 A superb Christmas gift for friends and family who have not been aware of many critical realities during COVID. “CAUSE UNKNOWN” provides immediate access to source material that can help people make much better decisions and be much more familiar with what’s actually been going on.

THE EPIDEMIC OF SUDDEN DEATHS

What is killing healthy young Americans?

2020 saw a spike in deaths in America, smaller than you might imagine during a pandemic, some of which could be attributed to COVID and to initial treatment strategies that were not effective. But then, in 2021, the stats people expected went off the rails. The CEO of the OneAmerica insurance company publicly disclosed that during the third and fourth quarters of 2021, death in people of working age (18–64) was 40 percent higher than it was before the pandemic. Significantly, the majority of the deaths were not attributed to COVID.

And therein lies a story—a story that starts with obvious questions:

It isn’t COVID, of course, because we know that COVID is not a significant cause of death in young people. Various stakeholders opine about what could be causing this epidemic of unexpected sudden deaths, but “CAUSE UNKNOWN” doesn’t opine or speculate. The facts just are, and the math just is.

The book begins with a close look at the actual human reality behind the statistics, and when you see the people who are represented by the dry term Excess Mortality, it’s difficult to accept so many unexpected sudden deaths of young athletes, known to be the healthiest among us. Similarly, when lots of healthy teenagers and young adults die in their sleep without obvious reason, collapse and die on a family outing, or fall down dead while playing sports, that all by itself raises an immediate public health concern. Or at least it used to.

Ask yourself if you recall seeing these kinds of things occurring during your own life—in junior high? In high school? In college? How many times in your life did you hear of a performer dropping dead on stage in mid-performance? Your own life experience and intuition will tell you that what you’re about to see is not normal.

Edward Dowd is currently a founding partner with Phinance Technologies a global macro alternative investment firm. He has worked on Wall Street most of his career spanning both credit markets and equity markets. Some of the firms he worked for include HSBC, Donaldson Lufkin & Jenrette, Independence Investments, and most notably at Blackrock as a portfolio manager where he managed a $14 billion Growth equity portfolio for ten years. After BlackRock, he founded OceanSquare Asset Management with two former BlackRock colleagues.

Even more trouble in "Paradise" pre and post C0VID... is this all connected to the Apocrypha books of Esdras and Enoch - the rebirth of a new Nephilim alien monster race via both political parties using human females as their pawns to give birth to genetically modified CRISPR MRNA vaccine monsters?
And the right claims to protect children and girls?! https://healthimpactnews.com/2022/florida-group-homes-in-foster-care-are-pimping-and-sexually-trafficking-children/

"This is another tragic story where a family innocently took their child to an emergency room, in this case the pediatric emergency room at Johns Hopkins All Children’s Hospital in St. Petersburg, Florida, and then found themselves in the middle of an investigation from a “Child Abuse Pediatrician” whose sole job is to find abuse in children."

Georgia's race for the Senate runoff:

“I’m gonna fight for our men and women of service. I think this is immoral, and I think it’s an act of treason because we’ll keep our country unsafe. And I think for a president, a sitting president and a sitting senator to make our military weak by forcing them out of the military or forcing them to lose the benefits so they refuse their right — their right to decide for themselves — I think that’s an act of treason, and I’ll say it,” Walker said."
breitbart.com/radio/2022/12/03/exclusive-herschel-walker-biden-committing-an-act-of-treason-with-military-vaccine-mandate/

Raphael Warnock (D)
"November 16, 2022......The U.S. Equal Employment Opportunity Commission isued guidance confirming the rights of employers to mandate the COVID-19 vaccine....while transmission of the virus remains high, vaccines will give Americans the freedom to move move around in public and keep others and themselves, safe. I was glad to receive the vaccine at Morehouse School of Medicine in January 2021 (He didn't mention getting any boosters)....Additionally, on August 23, 2021, the FDA gave full approval to the Pfizer vaccine and on January 31, 2022, the FDA gave full approval to the Moderna vaccine. ( This is patently misleading, if not false)...i HOPE THIS MAY ENCOURAGE AMERICANS WHO WERE WAITING FOR FULL APPROVAL TO GET THE SHOT." (emphasis mine)

It appears that Warnock has not only failed to update his boosters, but his Covid information as well.
FACT CHECK FAIL

I hope the voters will make Georgia PURPLE.

DADADA-DAAA! nothing to do with vaccines .I knew all along it woz broccoli ..

Broccoli and raspberries could give you COVID, health experts warn after learning that virus can live on popular foods for as long as a week
The tests found that coronavirus lived longer on produce with uneven surfaces
Covid was detected on peppers, ham, bread crust and cheese for several days
But the scientists have advised that the risk to consumers remains very low

I cannot believe people (on either party) are praising this as a good thing: Florida already regularly handcuffs little kids, and now FL schools will legalize physical assault and teachers attacking students - in the name of "stopping bad behavior via consequences"... but where were all the violent, destructive students prior to 1986/the ASD eruption?