Home Donate Contact Us Special Reports Science Email Subscription 2021 RSS Feed 2021 Our Mission
American Academy of Pediatricians: Have a Coke and a Shot Kid!
How To Cheat and Lie with Vaccine Science: A Review of Turtles All The Way Down

Bob McGrath Was Important in Our Neighborhood 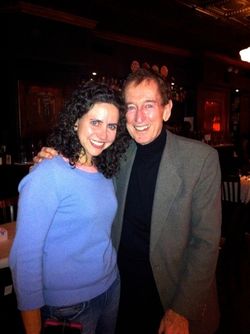 Bob McGrath passed away at 90 years of age. Bob played "Bob" on Sesame Street for 5 decades. In 2011, I was in a restaurant in New York city, when I looked across the room and saw BOB sitting at a table with 10 or so patrons. BOB. I froze. Gathering my courage (that wasn't so hard) I motioned to a younger person at his table, "Could I approach, Bob?" She nodded, "Yes."

I walked over and promptly BURST INTO TEARS as I said to him, "Oh my goodness, you're Bob! You have no idea what you mean to my 3 daughters with autism, and me!" He was so kind. We chatted for a few minutes. He told me that he had a dear family friend whose son had autism, and he had a special interest in helping our kids. Sadly, he also said that CGI (this was 2011) was rapidly replacing the live adults and kids on the show. Sesame Street has changed with the times. Make of that what you will.

His songs were some of the classics, including a household favorite, "Who are the people in your neighborhood?" We sang it earlier this week at the dentist's office. I can make up words for any profession. My daughters have always loved Sesame Street, especially my oldest, who turns 28 this month. Her first word was "Ober," for Grover, the furry blue monster. Sesame Street's songs have guided and soothed my daughters, and helped them process their world.  Sesame Street has changed  from its inception in 1969. The program was to help children, especially city kids, who weren't represented on television, learn pre-school and Kindergarten basics. Counting, the alphabet, how to interact with people, manners, kindness. I watched the first episode in my 1st grade classroom. Any of you old enough to remember when the TV was rolled into the classroom on a tall stand? Today, public health has gotten its claws into programming. Enough said, this is an homage to Bob. A person our neighborhood that I will miss.

As an immigrant to the USA at age 2 1/2. I remember my Mom telling my dad "Ponlo en el canal ocho, para que apprende ingles." Put in on channel 8(PBS) so I can learn English. Sesame street helped me and my family learn English. What fond memories. Adios Senor Bob! Vaya con Dios!
Thank you for all that you did for us.

I hated Sesame Street and loved Reading Rainbow when I was a little kid. I also heard that Dragon Tales was a nice kids cartoon but I was a lot older when it first aired. Is someone offended by the fact there was a 2 headed pink dragon in that Dragon Tales or that fact the little kids where Colombian.

Kim-both my older son without autism and my younger son with autism grew up watching Sesame Street and it still holds a place of fondness in my heart. My sons are now both adults and the one with autism still loves to watch clips from the old show on YouTube. He also has a huge collection of Sesame Street stuffed animals in his room. Bob was so wonderful on the show and he will be very missed by so many who remember the joy he brought to all of our children on the show. God Bless him.