Home Donate Contact Us Special Reports Science Email Subscription 2021 RSS Feed 2021 Our Mission
Up, Up and Away
A Cornucopia of Disabled Children Threatens UK Education Systems 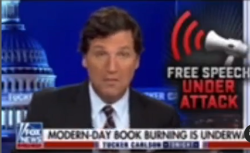 Skyhorse Publishing's Tony Lyons was a champion for freedom of speech and the press before Elon Musk sent his first Tweet.  Last week, Tony was on Tucker Carlson's program on Fox News. Some of our readers  might turn up their nose, so I ask you to please remember the big picture. Speaking of remembering? I am old enough to remember when Tucker was on Cross Fire on CNN.  Back when debate was allowed for  entertainment and ratings, not just tribal proclamations. Note: I'm not sure if this embed code of the video below from Insta will work, but fear not, the transcript is below, courtesy of our own Anne Dachel.  Direct links to buy the books mentioned are in the transcript and at the end of this post.  The video is on our Instagram: find and follow us please at https://www.instagram.com/autismages/

Tucker Carlson: So people have been trying to ban books for, since well, the invention of the printing press and even before.

But for generations in this country you had brave, civil liberties-minded publishers who bucked those trends. In fact throughout the English-speaking world you had publishers—most of them left wing by the way—who said no, free people have the right to read whatever they want.

But those publishers don’t exist anymore. In fact we’re down to pretty much just one that we know of.

The name of that company is Skyhorse Publishing, and it has done what civil libertarians did for many years. It has published works by cancelled authors: in their case, Woody Allen, Robert F. Kennedy, Jr., among many others.

So the man behind this enterprise, the man who clings so tightly to the ideal of free speech in a country becoming authoritarian, is Tony Lyons and we are grateful to have him join us tonight.

Tony, thank you so much for coming on.

Tony Lyons: I think freedom of speech is the most important freedom we have, and it’s besieged at every side.

Continue Reading After The Jump

The left wants to shut down freedom of speech in so many different ways.

The right is there calling for more speech, more dialogue, more debate, and I’ve been right in the middle of it, publishing book after book by authors like you said:

Robert F. Kennedy, Jr., The Real Anthony Fauci  Dr. Robert Malone, Lies My Government Told Me Dr. Pierre Kory, The War On Ivermectin  many of the doctors who’ve been de-platformed and censored and cancelled.

Carlson: What’s so interesting is that, just take the case of Bobby Kennedy’s book about Tony Fauci and about the corona experience that all of us watched. So that book would never have been published really by anyone but you. That’s why you published it. But I think it did blockbuster numbers, I think you sold a lot of copies, I’m sure you made a lot of money. I sure hope you did.

So why wouldn’t Simon and Schuster do that? I thought these were profit making companies.

They feel pressure from every side, and they buckle under it. And I feel pressure, but like I said when we spoke last, I think it’s more dangerous to have a country where we don’t have the right to publish whatever we want, to have people read whatever they want, to make the choices for themselves.

There are so many ways that free speech and dialogue is getting shut down in this country. All the big tech companies have buckled to the government.

It just has to stop, and I want to be part of that process.

Publishers also have the right to NOT publish something they do not want to be involved in like far left
propaganda and even more so far right extremism material so free speech can go both ways! Tucker Carlson is a right wing social justice warrior they are more absurd than the left wing ones.

Just watched this film and found it to be the best one yet:

Well done Skyhorse to many great books to list that would not have seen light of day if it werent for Mr Lyons. I read that books published in the past that were a mistake and cast Pharma and its hoods phamilys et-al in a bad light are bought up and destroyed i.e. Survival Of The Wisest Jonas Salk-1973 eh! where he salivates about eugenics.

For years, Skyhorse has been publishing great books nobody else will. JB Handley is my favorite on this publisher's list.