The Defender on FDA's Snail's Pace of Safety Signals in Elderly 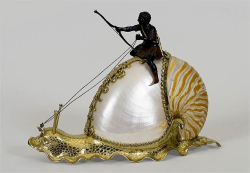 The Covid vaccine program was touted as a way to protect the elderly. Even if you didn't want the vaccine for yourself, it was your duty to your elders to participate. Below is an expose from The Defender (Children's Health Defense) that should be front page news. The Defender used the term, "slow walked" the data, thus our fancy mother of pearl, gold snail photo.

Miss a day, miss a lot. Subscribe to The Defender's Top News of the Day. It's free.

The U.S. Food and Drug Administration (FDA) took more than a year to follow up on a potential increase in serious adverse events in elderly people who received Pfizer’s COVID-19 vaccine, according to an investigative report published Tuesday by The BMJ.

According to The BMJ, in July 2021, the FDA “quietly disclosed” the findings of a potential increase in four types of serious adverse events in elderly people who had received a Pfizer COVID-19 vaccine: acute myocardial infarction, disseminated intravascular coagulation, immune thrombocytopenia, and pulmonary embolism.

The FDA disclosure lacked specific details, such as the magnitude of the increased potential risk, and the agency said it would “share further updates and information with the public as they become available.”

The FDA did not alert physicians or the public, via a press release or any other means, The BMJ investigator said.

Eighteen days later, the FDA published a study planning document that outlined a protocol for a follow-up epidemiological study for investigating the matter more thoroughly.

That was over a year ago. “More than a year later, however, the status and results of the follow-up study are unknown,” The BMJ reported, adding:

“The agency has not published a press release, or notified doctors, or published the findings by preprint or the scientific literature or updated the vaccine’s product label.”

Critics of the FDA’s failure to warn the public voiced their concerns about the data to The BMJ and called on the FDA to notify the public immediately.

“To keep this information from the scientific community and prevent us from analysing it ourselves, is irresponsible,” said Dr. Joseph Fraiman, an emergency medicine physician in New Orleans who recently carried out a reanalysis of serious adverse events in Pfizer and Moderna’s randomized trials. “It presumes that these organisations are perfect and cannot benefit from independent scrutiny.”

“The fact that the FDA found these four safety signals means they should have followed up on the results and I don’t understand why we haven’t had more information since then.

“It has been over a year.”   Read more at The Defender FDA Slow-Walked Studies on COVID Vaccine Safety Signals in Elderly

Idea for an ugly sides of autism documentary called "21st Century Childhood" because ASAN and all those self advocacy groups won't talk about the living hell ASDs create for so many families. And for those organizations who still think vaccine injury started with the C thing or believe in "safer smaller" poisons.