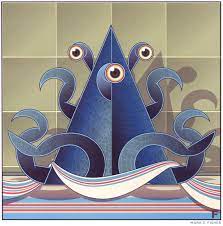 I have been a Ray Bradbury devotee since I read my first short story in high school. Bradbury was the prolific science fiction author whose work captured the soul of humanity in every story. You might know him as the author of Something Wicked This Way Comes and Farenheit 451 (the temperature at which books burn) and other famous novels. In today's divisive political climate, both "sides" are claiming to be the Guy Montag, the rescuer of content.  Fahrenheit 451 is a 1953 dystopian novel by American writer Ray Bradbury. ...the novel presents a future American society where books are outlawed and "firemen" burn any that are found. The lead character, Guy Montag, is a fireman who becomes disillusioned with his role of censoring literature and destroying knowledge, eventually quitting his job and committing himself to the preservation of literary and cultural writings.  (Source, Wiki)

Tomorrow's Child is about a couple who use the newest science available to birth their baby. A machine that takes the atoms of the baby in utero, scrambles them out, and reassembles them without mother having to go through the hardship of labor and delivery. Except.....  the machine, the trusted science of Dr. OBGYN, goes badly wrong, and Peter and Polly's baby is born as if in another dimension. Their son is a bright blue pyramid with squiggly tentacles.  The doctor explains the mishap in sterile, quiet tones. SCIENCE is God today, but whose science? And what has technology done for and to our children?

The story was brought to life in Ray Bradbury Theatre in a rather stilted, odd version of Bradbury's beautifully written prose.  I recall reading the short story when I was about 20 years old.  I suppose I thought it was fanciful and dreadful, imagine having a blue pryamid instead of a flesh and blood human baby! Life has a sense of humor. My own daughters, beautiful humans, are like blue pyramids.  Round pegs in a world of square holes.

If vaccines are "safe and effective," why so much censorship?

"At least 45 Biden officials worked with Big Tech to silence Americans
More than one federal agency reached out to Facebook and Twitter employees, instructing the social media giants to flag specific information as “misinformation.” This vast censorship enterprise included at least 45 identified federal employees. The Department of Homeland Security (DHS), the Cybersecurity and Infrastructure Security Agency (CISA), the National Institutes of Allergy and Infectious Disease (NIAID), the Centers for Disease Control (CDC), Health and Human Services (HHS), the U.S. Election Assistance Commission, and the Office of the Surgeon General were all involved. These agencies repeatedly pressured Facebook and Twitter to censor specific topics, and they even directed the platforms to suppress speech using official, government-approved narratives."
https://www.shtfplan.com/headline-news/censorship-government-coordinated-with-big-tech-to-censor-americans-and-cover-up-crimes

"he has been diagnosed with autism and requires frequent breaks from work, additional teacher support, a visual timetable, and a distraction-free personalised workstation to help with his anxiety."

The neurological decay of the Sunshine State - Desantis will NOT save us from the Pandora's Box, its too late.

"Desiree's parents, Luc and Ruby, say there's more to the story. They say she suffers from mental illness, autism, and has been previously Baker Acted. They say she doesn't always understand what she says and is not competent to handle herself in court. She was supposed to begin classes at Marchman Technical College. Now, she sits in jail on $10,000 bond."

"The incident allegedly occurred after a five-year-old was removed from class for "throwing things around" and "flipping the chairs." The actual attack happened in a "cool down" room where Meadows and the student were alone.
The teacher was later taken to Memorial Regional Hospital in Hollywood, where they were treated for a concussion.
While the child is still being investigated for "aggravated assault with hands, fist and feet," a police spokesperson told NBC that it's unlikely they would be prosecuted. They argued that proving the child could distinguish between right and wrong would be difficult."

"TOKYO -- Foreign teachers at public schools in Japan have been forced to endure different treatment from that of their Japanese counterparts. This comes despite administrative authorities and schools advocating a "multicultural and inclusive society" in Japan, home to some 2.8 million foreign residents who have supported our society together with Japanese citizens."

"SAGAMIHARA, Kanagawa -- A memorial service commemorating the victims of a stabbing rampage that left 19 people dead and 26 injured at a residential care facility for people with disabilities in this eastern Japan city was held on July 26, the sixth anniversary of the incident."

Violent autistic children screaming k1ll threats at their parents and biting/punching their guardians would've terrified the world and made news headlines 50 years ago, if it wasn't for the post-1986 "hockey stick" eruption in ASD, electronics and internet addiction, poor gastrointestinal health, aluminum and heavy metals, and childhood mental illness cases. A violently autistic girl from Indiana has severe bipolar disorder to the point she bites, hits, scratches and savagely attacks her parents and threatens to end them. To the point she is chained to beds in pediatric mental hospitals, and they blame lack of "help" when psychiatry and psych "medicine" is yet another part of the problem, not the solution. She became aggressive/self-injurious after being given anti-epileptic pills as a baby after she "mysteriously" got epilepsy from her massively obese, smoking mother. And news networks won't talk about the epidemic of violent, psych drugged, violently dangerous children on either party! Neurodiversity extremists blame straight up violent, demonic/demon-influenced behaviors and increasing suicidality/homicidality in kids as young as pre-k on lack of "mental healthcare".

While showing small elements of fight, flight, and freeze. There is no consummations of these. Only elements of union and understanding ending always in Coming Together. Gotta love Rita Hayworth, OMG.

When I am not even allowed to be posted here I have no alternatives. That is the nature of understanding. In 50 years some may understand.

The Sight of Food Triggers Inflammation in the Brain

What’s the Connection Between Leptin and Psoriasis?

There’s a dark secret in me

"Make it one for my baby
And one more for the road...
The long
It's so long
The long and winding road."

I realize I seem a nuisance. I have seen the other side.

I pulled the rabbit out of the hat. It was extraordinarily difficult , long, and painful.

And if you call out the science your a heretic you need silenced..

According to newly released emails obtained by state AGs, Facebook & the Biden admin arranged weekly/monthly calls to discuss what to censor on the platform.