Turtles All The Way Down: Vaccine Science and Myth 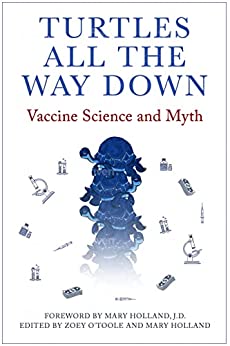 What does "Turtles All The Way Down" mean?  See the reference at the bottom of this post.

In 2019, a remarkable book, “Turtles All The Way Down: Vaccine Science and Myth,” was published in Israel. The book, originally written in Hebrew, is a comprehensive examination of the evidence behind the assertion that vaccines are safe and effective.

Though it might easily have been lost to obscurity, the book gained initial acclaim when the leading medical journal in Israel, Harefuah (“Medicine”), gave it a positive review.

Writing in the September 2019 issue of Harefuah, two senior academic criminologists, Nati Ronel and Eti Elisha, “found the book to be well-written, serious, scientific and important” offering “a comprehensive view of the issue.”

“Turtles All The Way Down: Vaccine Science and Myth” became the first book critical of vaccines to have ever received a positive review from a mainstream medical journal.

Criticism of Ronel and Elisha came quickly from the medical establishment, but as Mary Holland, editor of the book and Children’s Health Defense president and general counsel states in the book’s foreword:

“Their appraisal of the book still stands today, unscathed: in the three years since its (Hebrew) publication, no medical or medical science professional has succeeded in refuting the book’s claims.”

The reason the information offered in the book has yet to be refuted is simple. The book’s 1,200+ citations reference only mainstream scientific journals and health agencies like the Centers for Disease Control and Prevention (CDC), the U.S. Food and Drug Administration (FDA) and the World Health Organization.

According to Professor of Philosophy Joel Richeimer, the phrase “turtles all the way down” stems from a story about the British philosopher Bertrand Russell. After giving a lecture on astronomy, Russell was refuted by a woman in the audience, who claimed that the earth was situated not in space, but on the back of a large turtle. When Russell asked what the turtle was standing on, the woman replied that it was “turtles all the way down.”

The apocryphal story has been told in many versions, and while the hypothesis may seem absurd, it gets to the heart of an important philosophical question. “All knowledge has to have a foundation. Something has to be at the bottom,” Richeimer said. “So if you believe in modern physics, you say what’s at the bottom is atoms. That explains everything. Or if you’re a religious person, you might say it’s God.”

But what are atoms made of? Or who created God? “The question is, does it really satisfy us, having a foundation,” Richeimer said. “And her response is not a bad one. Her response is, well, it’s turtles all the way down. Why does there have to be an ultimate turtle? A single turtle is a problem. Infinite turtles is no problem.”  Source: https://www.kenyon.edu/news/archive/turtles-all-the-way-down/https://www.kenyon.edu/news/archive/turtles-all-the-way-down/

A federal court (at least I think it was federal 🥴) recently ruled that, when it comes to vaccines, children can not provide informed consent. From what I understand, this decision was regarding the children in our nation’s capital. The mayor of Washington DC, believes that their parents should also be stripped of consent. Coercion is not consent!
https://m.youtube.com/watch?v=uNL_-jfaqsE

The religious ritual that vaccination is in America will prevent many from reading this book:

pharma all the way down...from top to bottom vaccines causes it all and cures it all..were all meant to believe.

You can read the the 1st chapter of the book in PDF format:
https://tinyurl.com/TurtlesBookChap1Eng

Ordered mine yesterday. Spread this far and wide.
Maurine