Travel Mask Mandate In Our Future? 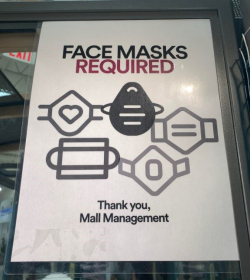 Note: Mask mandates can be highly discriminatory to children and adults with autism. The lock down never really ended once mask mandates were in place.  Even just walking through a store became impossible for some. And the mandates opened those unable to wear a mask to ridicule, scorn and violence. Most of us are caring enough to stay HOME if we are so sick that we need to wear a mask. Without a mandate. Some of us attempted to help our loved ones with autism to tolerate a mask. I did. Not out of  fear or a desire to be 'compliant." I did it to give them options, if it was needed. I have zero interest in donning another mask - unless I am sick. Same for my daughters, although it's unlikely they would go anywhere if sick.  Choice is choice is choice is choice is choice. And choosy Mother's choose choice. ;)

Health Freedom Defense Fund, whose court victory overturned the sweeping federal Travel Mask Mandate, has filed its response to the government’s appeal to reinstate the mandate – and recover the sweeping, unprecedented federal regulatory powers over Americans’ daily lives and conduct.   The filing points out major flaws in the legal and scientific justifications for the illegal mandate.

In a 77-page filing with the U.S. Court of Appeals for the 11th Circuit, HFDF – and its attorneys with the Davillier Law Group – detailed how the order requiring all travelers to wear masks lacks not only any rooting in federal statutes, but it also violated existing federal law in how it was promulgated.  The mandate also suffers from an inconsistent application of sound science.

“The Biden Administration is trying to paper over an illegal, sweeping mandate on Americans that is full of massive legal and scientific holes,” said HFDF Founder and President Leslie Manookian.  “That a federal agency should be able to just usurp the power of Congress, and violate fundamental individual rights is not only at odds with the law – it defies basic common sense.”

HFDF’s filing demonstrates that its series of COVID-19 actions, including halting rental evictions and shutting down the cruise ship industry, were “extraordinary measures unprecedented in scope.”   In its entire decades-long existence, federal Centers for Disease Control and Prevention (CDC) had never claimed any authority over the life or conduct of any person — let alone the entire population.

Among the major points made in the filing, HFDF details how the CDC:

n  Invented a strained legal justification of a national health emergency a year after the pandemic started, merely because the White House changed hands.

n  Selectively and erroneously cherry-picked parts of existing statutes to justify its order – while ignoring other relevant parts of the very same statutes.

n  Illegally bypassed the fundamental requirements for adequate public notice and public comment prior to issuing its mandate.

n  Created an arbitrary and capricious order not rooted in sound science or actual efforts to combat COVID-19.   The order required travelers to don a medical device but lacked efforts to  identify sick individuals or stop the spread of COVID-19 across state lines.

The filing points out that if the CDC’s invented authority is given court authorization, the CDC’s ability to govern the daily lives of Americans would be virtually unlimited, justified by any future “health emergency.”  This could include requirements for diet, exercise, good hygiene, vaccination and even the mandatory use of prophylactics to prevent venereal disease.

“Our concern goes well beyond the requirement for masks on planes, trains and buses,” Manookian said. “Allowing a federal agency to just invent sweeping powers without any anchor in law and then bypass the requirement for public notice and comment means that the bureaucracy can do whatever it wishes as long as it hangs out the fig leaf of an emergency.”

In April, HFDF scored a major victory for American’s basic freedoms when a U.S. District Court in Florida invalidated the federal Travel Mask Mandate.  The federal government subsequently appealed to the U.S. Court of Appeals for the 11th Circuit.

In her 59-page opinion, Judge Kathryn Kimball Mizelle of the U.S. District Court for the Middle District of Florida detailed how the CDC circumvented the requirements requiring public comment, and how the agency failed to justify the Mask Mandate under the specific language of federal law governing health emergencies.

“The Mandate exceeded the CDC’s statutory authority, improperly involved the good cause exception to notice and comment rulemaking and failed to adequately explain its decisions,” Judge Mizelle wrote.

Health Freedom Defense Fund is a 501(c)(3) non-profit which seeks to protect and advance health freedom, educating Americans on informed consent, advocating for human rights and bodily autonomy for all people, and legally challenging unethical mandates, laws, and policies when necessary.   For more information visit www.healthfreedomdefense.org