Don’t Fall for It 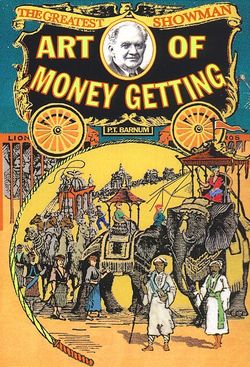 In the beginning, Pfizer advertised that Science Will Win.  Back in 2020, it sounded like all of Science would work together to overcome the pandemic.  Fast forward to last week.

It looks like Science doesn’t want to play in the same sandbox anymore.

Moderna is going after Pfizer, suing them for vaccine patent infringement.  When I heard that news, I immediately thought of two bullies on a playground.  Bullies think they can do whatever they want.  Sometimes they get what they want by force.  Sometimes others assist them in their goal.  Moderna and Pfizer, with the help from the US government, gained billions in a short amount of time.  Countless mandates, encouraged by the government, helped those two companies stay ‘leader of the pack’ even today.

Pfizer’s Comirnaty brought in more than $36 billion in sales globally last year, and analysts expect it to bring in nearly $33 billion this year, according to FactSet.

Using similar tactics as last year, the government predicted “a pretty sizeable wave of infections” again this fall and winter.  It would not be surprising if both of those pharmaceutical companies’ profits increased.  That’ll happen when updated covid booster get approved.

The U.S. has a contract to buy 105 million of the Pfizer doses and 66 million Moderna ones, assuming FDA gives the green light.

Even though other manufacturers joined the warpseed-race to create and sell their own liability-free products, like the less popular Jansen and the now-available Novavax,  the now-at-odds pharma giants garnered all the attention.

The Pfizer and Moderna vaccines deliver genetic instructions for the body to make copies of the spike protein. The lesser-used Johnson & Johnson option uses a cold virus to deliver those instructions.

When the Covid Era began, anytime vaccines were mentioned in the news, it seemed that Moderna and Pfizer were deemed the best, and only, choices. 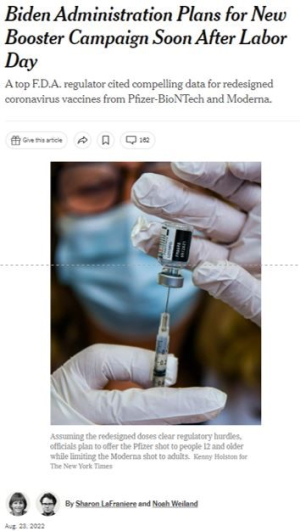 Constant promotion of their products, even before they were made available, has kept the vaccine conversation going.  Radio ads remain vague, as to exact ingredients used in the formula, but the message has always been clear – get the shot. 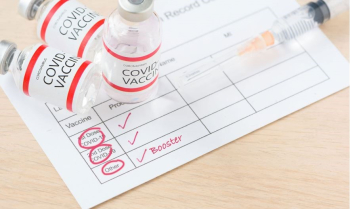 And now get it one more time.  With a new formula.  Which probably can help. But we’re not exactly sure yet.

“A bivalent vaccine will have some benefit for almost everybody who gets it,” Rishi Goel, an immunologist at the University of Pennsylvania, told me. “How much benefit that is, we’re still not exactly sure.”

That uncertainty, to me, is a red flag.  So has been the getting around of what had been standard safety testing. The drive, though, to get vaccinated and boosted continues.

It’s all just been a bit odd to me.  The massive push for fast-tracked vaccines.  The belittling of those who chose not to get them.  The ever-shady tactics.  The constant moving of the goalposts.  And the complete lack of logic.

I know this hasn’t been easy for a lot of people, including for my own family and friends.  But I haven’t fallen for it.  If you haven’t fallen for any of this either, stay the course.  Bullies may be strong.  It would be awesome if we can stay stronger.

Thank you for your comment. To clarify, my intent when saying “Nothing new under the sun when it comes to vaccines” was to state that whether the vaccines or old, new, or somewhere in between, they are based on lies, lies, and more lies.

As for the “Covid 19” vaccines being unprecedentedly dangerous, I don’t think I agree. When I think of the vaccine carnage in my own family, including extended, in many families I know, in numerous accounts I have read, and as evidenced in people of all ages, plagued by too many illnesses and conditions to list, I come to the conclusion that vaccines have been inexcusably and horrifically dangerous from their inception, right up until the present.

I will conclude with the ending from my “Why Is This Legal?” presentation, which encapsulates my position that there is no safe, effective, or needed vaccine. Vaccines are not a means to vibrant health, proper development, robust fertility, or longevity…in fact, they are the opposite.

“We cannot, and should not, defend that which is indefensible, and that includes the barbaric and reprehensible practice of vaccination.

My bumper sticker messages to leave you with tonight are:

Why is this legal?

Vaccine-free is the way to be!“

One vaccine and your never coming back.

Even the MSM is less than enthusiastic about the latest bivalent Covid booster.....

"The FDA does not plan to convene its advisory panel, the Vaccines and Related Biological Products Advisory Committee, ahead of the authorization, one person said."

"Both Pfizer’s and Moderna’s applications included data on how well the BA.4/BA.5 booster shot performed in animal studies, but studies in humans have yet to be completed."

"The decision to move forward without complete data from human trials has been a sticking point for some outside scientists, who say the new shots have not demonstrated that they are any better than the existing vaccines from Pfizer and Moderna."
https://www.cnbc.com/2022/08/24/fda-plans-to-authorize-bivalent-boosters-by-labor-day-sources-say.html

Laura, it was folks like you and Suzanne Humphries who deserve most of the credit for my conversion several years ago to being a hard core across-the-board anti-vaxxer. But I must disagree when you say, "Nothing new under the sun when it comes to vaccines." These COVID vaccines are so unprecedentedly dangerous that they are even waking up a huge portion of the general public who previously just took government-approved vaccines in general, including the entire "recommended" childhood vaccination schedule, as being safe and effective just because the FDA says they are. From what I've been hearing, it sounds like the FDA's and CDC's credibility with the general public is now rapidly going down the toilet to the point that a lot of parents are even having second thoughts about all childhood vaccines and the trustworthiness of pediatricians in general. I wouldn't be surprised to see the entire 1986 NCVIA repealed by the end of this decade, followed quickly by the disappearance of all vaccines as we know them today, including annual flu shots for adults.

Never again! Pharma, you royally damaged one of my kiddos for life, shameless,people/companies that you are. A good point from the damage is that you(pharma) awoke a sleepy mighty giant in me and everyone here at AofA. I personally have convinced five families to never again vaccinate their children. U lost those profits!, but the children are thriving and healthy. I imagine, there are hundreds if not thousands that have refused your safe and effective vaccines, thanks to this website. Blessings to all! Thanks again Ms. Jameson for a great post!

The liability is nationalized Kyle, not the profit:

Well said, Cathy…thank you for your continued articles on AoA, a welcomed weekly treasure for AoA readers :)

As we here at AoA know, not one vaccine has ever been tested or approved properly or ethically. The new injections are as much a fraud as the old ones. Nothing new under the sun when it comes to vaccines. To that end, I think AoA readers will be interested to listen to a recent interview of Andy Wakefield by Steve Kirsch. It is excellent from start to finish. The MMR vaccine is covered in depth, along with many other topics, including the complete lack of proper testing, approving, and follow-up for every vaccine on the market. Steve is a great interviewer, and Andy, as always, is brilliant and eloquent.

Don’t worry. You would have to put a gun to my head to get me to take that thing.