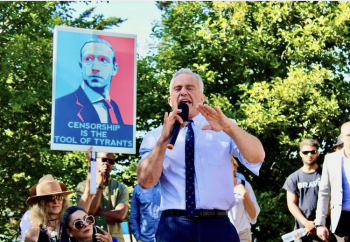 Children’s Health Defense has been deplatformed by Meta: that’s Facebook & Instagram.  An online killing is what it is.  The information CHD shares is fact checked, accurate and necessary - and yet, the United States Government allows, nay, encourages, nay nay, dictates removal by Meta, and other media. And Meta gleefully complies.

CHD was removed just as the media is talking up a stockpile of Monkey Pox shots that Americans will also snub in droves. They will refuse them in large part due to the education they got from the diligent work of Children's Health Defense, whose reporting on the Covid Vaccination program and its impact on American children and adults alike helped open millions of eyes previously closed to even the mention of vaccine injury.  I know many people who willingly got their first shot, and many who took the second, who will NEVER take another Cavid vaccine again and who are openly curious about the safety of the pediatric schedule.

Without CHD,  whom will the CDCedia blame? Looks over shoulder.....

Actions came on the heels of CHD’s-Meta/Facebook censorship lawsuit appeal.

Washington, DC — Yesterday, August 17, without warning, Facebook deplatformed (unpublished) the Children’s Health Defense (CHD) account. Simultaneously, CHD’s Instagram account was deplatformed (suspended). Each of these platforms had hundreds of thousands of followers. CHD received the following notifications from both platforms:

Facebook and Instagram deplatforming dovetails with CHD’s ongoing censorship lawsuit. CHD filed the lawsuit against Meta, which owns Facebook and Instagram, in August 2020. Recently, in its Ninth Circuit Court appeal filed on July 29, CHD provided the court with Centers for Disease Control and Prevention (CDC) produced documents the agency shared with Facebook. These documents, provided to Facebook on a regular basis, contained what the CDC considered misinformation. Titled “COVID Vaccine Misinformation: Hot Topics,” the documents asked tech giants to “be on the lookout” (BOLO) for various topics the CDC considers to be misinformation including: COVID-19 vaccine shedding, VAERS reports, spike protein data and more. The CHD case is currently pending in a Ninth Circuit decision.

Deplatforming by the tech giants came days after the CDC issued new guidance loosening COVID-19 policies — rules which CHD has criticized since the beginning of the pandemic. Within hours of the CHD deplatforming, CDC Director Dr. Rochelle Walensky shared her plans for overhauling how the agency works while admitting to a flawed response to COVID-19 and pandemic missteps.

Robert F. Kennedy, Jr. said, “Facebook is acting here as a surrogate for the Federal government’s crusade to silence all criticism of draconian government policies. Our constitutional framers recognized this peril of government censorship. We don’t need the First Amendment to protect popular or government approved speech. They incorporated the First Amendment specifically to protect free expression of dissenting opinions. They understood that a government that can silence its critics has license for every atrocity.”

CHD’s lawsuit against Meta/Facebook aims to preserve First Amendment rights for all and the stakes are high. CHD believes social media platforms have ruthlessly censored, suppressed and distorted information. The litigation against Meta/Facebook to stop censorship is just one of CHD’s 50+ active lawsuits to defend freedom of speech, medical freedom, truth, bodily autonomy and children’s health.

Children’s Health Defense is a 501(c)(3) non-profit organization. Our mission is to end childhood health epidemics by working aggressively to eliminate harmful exposures, hold those responsible accountable and establish safeguards to prevent future harm. For more information or to donate to CHD’s ongoing lawsuits, visit ChildrensHealthDefense.org.

Once public agencies started to post on Facebook (local police agencies, libraries, etc) I believe they broke their claim of being a totally private entity.

So it looks like Eindeceker & Freddie Chopin really did take Pfizer 4 series of jabs ?
We warned them - didnt we ?

As if things werent bad enough fighting the CDC/FDA criminals all these years.
Now we have new group to aim at & fight with ?

The new head of this high-level division (same level as FDA/CDC) is Dawn O’Connell who has a background in literature (Vanderbilt) and law (Tulane), not science or medicine. She is a political appointee who took the reins as Assistant Secretary of Health and Human Services for Preparedness and Response, as confirmed by the Senate in 2021. She is now elated to report that her division will be elevated to become just as important as the CDC and the FDA.

Here is her memo to the staff:

As you know firsthand, ASPR is at the forefront of many of HHS’s and the Biden-Harris Administration’s top priorities. Whether your work involves strengthening our core preparedness and response capabilities, tackling new and emerging challenges, or providing essential support services to the team, please know that the work that you do matters and that it is making a big difference.

This change allows ASPR to mobilize a coordinated national response more quickly and stably during future disasters and emergencies while equipping us with greater hiring and contracting capabilities. As an OpDiv, we are now in the same category as other large HHS teams with core operational responsibilities such as CDC, NIH, FDA, CMS, and ACF. This change is an important next step for our organization which has continued to grow and evolve since its creation in 2006 – the pace of which has quickened over the past year. This change is also a recognition of the good work you all have been and continue to do on behalf of the American People….

Along with this reclassification, moving forward we will be known as the Administration for Strategic Preparedness and Response (ASPR). The adjustment to our name signals our elevation to an OpDiv, while maintaining the equity and brand recognition we have built with key internal and external stakeholders, particularly over the course of the pandemic.

Well done CHD deaths would have been a lot higher without the work you do.It seems
Covid isnt killing enough deaths up 14.4% probably higher as thats their own figures and we all know how they can past 10 fingers and ten toes ...

Released on Tuesday, the Office for National Statistics' figures for excess deaths in the UK has revealed that about 1,000 more people than usual are dying each week from illnesses and conditions other than Covid.

This makes the rate for excess deaths 14.4 per cent higher than the five-year average, meaning 1,350 more people have died than usual in the week ending 5 August.