Home Donate Contact Us Special Reports Science Email Subscription 2021 RSS Feed 2021 Our Mission
So You Want To Be Autistic: Transautistic Is the New Self-Diagnosed
Show Me the Sign

What A Relief! Autism Portrayal or Betrayal? 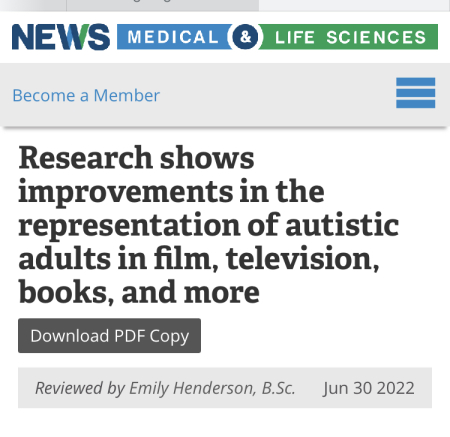 Take heart, researchers have been paid to study the portrayal of autism in books, TV and movies, and it's getting better! The study looked at the lack of adults with autism represented.  Why is that?

The closest I have seen my daughters' versions of autism portrayed in a movie was in the 1998 Alec Baldwin movie Mercury Rising. It featured an autistic boy named Simon who used PECS and whose Mom was killed after he cracked a super secret government code that no one was supposed to crack. I wept through the movie, as I was just figuring out that my beautiful first born was autistic herself. The title was lost on me, until I started digging into causes.  If they made a follow up movie with Simon as an adult, he would look very much like my daughters.  If the plight of the autistic includes, housing, employment, relationships, across the spectrum, I'm all for that push. Just don't leave behind the Simons of the world.

If you want to read the study, click HERE.

Great Film, The Story of Christy Brown .Based on a true story ,with starring fab actors , Daniel Day -Lewis and Brenda Fricker
"My Left Foot" 1989

Crossroads -Wikipedia . Still calling Benny the village idiot ? Oh What!
Spot the acute training deficiency defectives ,who still don't know, how to spot the difference between a learning disability and a learning difficulty !!!

OK, since Emmaphiladelphia has opened the door, I'll just come out and say it. Alex Jones. Infowars.com. Banned.Video. "Alex Jones was right." This journalist/commentator, relentlessly demonized by the captive mainstream media, has been saying for months that autistic children would be targeted for transgendering and in fact already are.

He isn't always right, of course. Just most of the time. Jones, with his stable of distinguished guests and talented staff, knows how the world works and will show it to you. You'll see the dots connected just like the bouncing ball in those old (very old) theater cartoons connected words to form a song. Don't like his ranting? Turn the volume down for those parts. But don't tune out. Your very future, and your children's, could depend on it.

I would also choose Mercury Rising as the movie that best portrays the autism experienced by my son, even though he is what is called “high functioning”. The inability to cope with the outside world is shown beautifully. One of the writers must have had experience with an ASD child. I would choose it over academic films, e.g. Tony Atwood, attempting to describe the condition.

Bruce Willis was in that "Mercury Rising movie too.
Now Bruce has something that sounds pretty close to autism to me?

Alex Geesh, I am spooked and see every thing as an off color. Years later we have Alex just gets done with a great pod cast about vaccines with Robert Kennedy Jr. . and then that accident happened.

I heard some talking lying heads on the TV say the actors on "Rust" were being careless and had blanks and real ammo around; of course I don't know, since all that comes our way is lies.

. More conspiracy theories; than we can shake a stick at. One thing I am pretty sure of is that tjere are so many crazy billionaires that have sold outwestern civilization to the Chinese communist.

They have helped in the attacks on America. from bringing drugs across the Mexican border which is a waste of time since the big pharma is more that willing to give Americans' all kinds of morphine to kill them more directly. Plus why kill us all with fentanyl when Big Pharma will have half of us with autism by 2032 anyway. .

I hear all the interviews of people talking about the meeting in which they approved of giving 6 months to 5 year old the Covid vaccine.

They are seem to be describing those meetings - IACC That they tease the viewers into thinking they just might be reasonable, and then dash their hopes - like a cat playing with a mouse or something. Then they talk about how it is not the big drug companies that are really killing us; it is the protective agencies themselves that does the sloppy, fake science

They don't care
It has been all about population control all along.
We cry and belly ache, but they are evil and they don't care.

Here’s the (I think) equitable challenge I would beg. For the most part, I don’t think any of my three children identify as trans, or homosexual. Fingers crossed, I’m wrong. However, in case I’m not, I want to know if there’s a color on the teans/autistic rainbow for them. Two of them are unvaccinated & one of them is mildly vaccine injured (allergies, asthma).

Is there a chance that Christi’s Hedges, and/or Glen Greenwald would cover vaccine injury?

After all it’s jus a color…..and when I’m feeling really lose, I color puce:
https://m.youtube.com/watch?v=hlzRAvAm4NU

The 2016 movie starring Ben Affleck drives it home for me. I’m not even remotely sure that Declan (b 6/24/02) could be the “Accountant”. His completely unvaccinated younger brother Grady, shows less of a chance. He’s a lover not a fighter. Declan & Grady’s 15 yr old little sister had the least chance of all of becoming the accountant. If anyone challenges me regarding what they need to be injected with. I will beg for an equitable challenge.

I think if the Goverments cofllated the data properly as the UK`s Jackie Fletcher tried to do 15 years ago under vaccine batch numbers and then the damage done to each baby ,that would have nailed the vaccine damage years ago.Vaccines with the same batch numbers were causing similar damage to babies when given to the babies all over the UK.

But then Pharma dont want you me or anyone to rumbe there massive cartel.

Hmmm, could it be that there are more depictions of autistic adults these days because there are more adults with autism, due to the huge increase in autism over the past 30 years, paralleling the tripling of the infant vaccine schedule?

Get ready. "Autistic" children will be targeted for transgendering.

"Overall, the authors of the new study say that, while their findings show a shift toward more numerical representation for adults in portrayals of autism, there's still plenty of room for improvement, including in the capacity of those representations to truly reflect the lived experiences of autistic adults. UCSC Associate Professor of Philosophy Janette Dinishak, a coauthor of the new paper, says she hopes future improvements in representation might include increased attention to the intersectionality of autism with gender, race, ethnicity, and other social categories or identities."

This is why we must call it what it is. Vaccine induced encephalopathy. VACCINE INJURY.
What if we started "normalizing" a broken leg?
"Well, some people just have to have a cast and crutches to walk."
"Let's not make fun of some people with legs that are a little different."
"Let's make sports ALL INCLUSIVE" "No one with a cast should be left out."
They are normalizing INJURY to cover their tracks- so they don't have to PAY OUT.
SICK SICK SICK