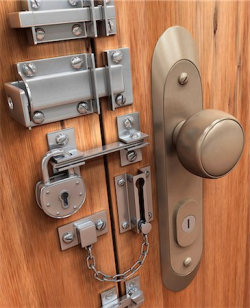 It hasn’t happened to us in a very long time.  But the potential for my son to wanderer is something we will never forget.  It happens.  And, for some, it can be deadly.  To the three families whose children wandered recently – and who died, I am so sorry.

and let Your perpetual light shine upon them.

May their souls and the souls of all the faithful departed

I had to place a service call this morning.  The technician hadn’t been to the house in a while, so he forgot that I have to unlock several locks before he could come inside.

Before continuing the conversation, I closed the door and made sure the alarm was active.  The technician waited for me in the front hallway as I peeked into the living room around the corner.  The big kids were at school, so it was just Ronan home with me.  I knew I’d have to accompany the technician away from where Ronan was playing to another part of the house.  He was happily occupied, so off the technician and I went.

We had to go out the back door to look at a potential problem area.  I said, “Hold on,” and stepped in front of him before he could reach for the doorknob.  I held my breath, unlocked the lock, and turned off the alarm.  "Okay.  It's opened," I said and moved aside.

A few minutes later, we were back inside.  I could hear Ronan in the same spot that I’d left him—playing Wii and listening to his music.

The technician and I sat at the dining room table and went over some information and some paperwork.  With the paperwork signed, he was ready to go.  I thanked him for his help and said, “Let me walk you to the door.”  The technician started down the hallway ahead of me.  As he reached for the doorknob to let himself out, I said, “Hold on a sec...”

He stopped mid-step and mid-reach.  Then he said, “Oh, that’s right.  The wanderer.”

It could be a book title.  A song title.  Or the title of an epic movie.  But it was not any of those.  It was a term made in reference to my son.

It’s because Ronan is not only prone to wander; it’s because he has wandered.

Ronan hasn’t done that in quite a bit thankfully.  I’d like to think that he hasn’t because he’s growing out of that behavior.  Because we’re doing a better job of keeping him safe and secure.  Because he prefers to stay indoors when the rest of us are inside.

Whatever the reason, I will never let go of the fact that my son has wandered.  That he is capable of it.  That he’s proven a few times that he will leave.  That’s happened when a door hasn’t been closed right away.  That's happened when I turn my head for just a minute.  That's when I let my guard down.  That's when I think maybe he won’t go out by himself today.

The second I don’t?

I don’t even want to think about that.

But I do think of that awful thought, and of an awful night two years prior, and pray we never experience anything like it ever again.

For more information about autism and wandering, please visit these sites.  Please also consider supporting the National Autism Association's efforts to educate families on how to reduce and prevent wandering incidents.

Thank you Ms. Jameson. I do have a few questions, but was not sure how to contact you. When time permits could you please contact me via e mail. Blessings.

Emmaphiladelphia - thank you for the wonderful comment. You've always been a great support, and I always appreciate your comments. When I do get to write that novel, I'll be sure to let you know!

Jerry, I am so sorry to hear that you recently experienced one of those terrifying moments! If I or anyone of us here can be a resource for you, please reach out. It can be a big shock to the system, so I'll be sure to keep you and your family in my prayers. Saying thankful prayers already that Sam was found safe and that you had a team of quick helpers with you.

Thank you Jerry for sharing.

All I can say is that our children keep their guardian angels working overtime!
As harrowing as it is for parents, this desire to get out and explore the world for themselves shows their humanity, their NORMALCY. Look at the ingenuity they use to escape. They obviously wait until they think no one is looking who will stop them. They are showing natural independence that they desire just like everyone else. They are not aware, however, that their injuries keep them from making safer choices or getting proper help. Is there a way for parents to allow them to go out with the illusion that they are on their own, but they are still being watched?

My spouse grew up overseas in an oil camp located in a jungle. Strange but true. He was only 4 when they moved there. Other young families with children were also in the camp. The jungle contained many predatory animals and poisonous snakes. The nearby river contained piranha. The children were allowed to play somewhat freely- or so they thought. The parents had hired a local to anonymously keep an eye on them. He knew of all the dangers and would be ready to intervene if necessary. The children were able to safely exercise their natural desire for independence and happily there were no incidences. With modern technology, there are ways to track someone's location with a cell phone or other devices. It sounds a little creepy, but it gives them an illusion of more independence while you have some peace of mind.

Thank you for posting your stories both Ms. Jameson and Emmaphiliadelphia. We experienced our nightmare about one month ago. Despite deadbolts, window locks and and almost constant monitoring, Sam got out. Squeezed thru a tiny opening in the window of his bedroom. So from about 10 pm-1:30 we along with local law enforcement and members of my family searched and searched. Kudos to our Local Law Enforcement agencies, they really went all out, even requested a helicopter search from the Houston Police Dept and blood hound from an agency about 20 miles away. Sam was found by LE unharmed about 4 miles from our home. A good samaritan noticed him in her car and had seen the alert by the Police about him! So many possible tragic outcomes could have occurred-But he was saved on this night! I shutter at the other outcomes , but our Sam was unharmed, tired and with a small piece of glass in his foot as his injuries. Now we have secured 100% his window and have installed sensors and cameras. The vigil remains constant-its tough! I think they say we have more stress than a soldier in combat! how sad. Blessings to all!

Cathy, when are you going to write your novel?

After reading your gripping account of Ronan's escape in 2014, I agree with many of the comments that you have a talent to make the reader feel as if she is there with you, emotionally and physically. God is answering all your prayers and He is bottling up all your tears and He is providing you with your writing material.

“And we know that all things work together for good to them that love God, to them who are the called according to his purpose.”
Romans 8:28