Twitter Disagreement Autism Is a Disability Not Just a Difference 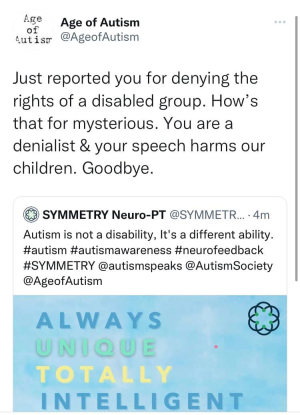 Disability or difference?  Let's get down to brass tacks. In the Age of Autism community, autism is a disability. It's not just a difference in my three daughters. They live under plenary guardianship. They rely on me for 100% of their health and safety and day to day life. They rely on the government for their $834 monthly Social insecurity, which I, like every parent here, supplement so that they have a roof over their heads.

When I read the Tweet in the photo on Monday, I'd about had it  ACCEPTANCE as a vanilla flag waving moment.  April came and went, a quiet month and  it was changed from AWARENESS to ACCEPTANCE.  We still believe in ACTION, never acquiescence. I reported the account for hate speech.  Below are some of the comments we had on our Facebook page in response to the photo. We also need to be SEEN, HEARD and have PRIDE in what we do for our children, and for what our children endure.

Symmetry Neuro-PT is a neurofeedback practice. One can only imagine how much much money they charge families to work with their child's different ability to make it a better kind of different ability. Almost as if it's a disability.

I just showed this to my daughter, 35 years old, autistic who said, it’s a disability all right. Which is why she’s still at home and will never work. If that’s not a disability I don’t know what is.

It’s just a different ability, that’s why my 28yo daughter needs 24/7 care. Hitting herself and others isn’t a disability? Come on over to my house!

Not smart to write that. Autism comes with gifts, but is also a disability. My daughter and the kids in her class, need care even to get dressed. Some find it impossible even to speak so become frustrated because misunderstood and throw things around.…

This is why I generally don’t participate in autism awareness / acceptance stuff in April. My experience with severe, nonverbal autism with Jimmy is not just cute, quirky behavior. Violent rages that injure him and those who care for him are not some…

All this nonsense is so that the people responsible can have plausible deniability that something is fundamentally new and wrong since the mid eighties. One of the most offensive experiences is when someone tells you we're just better at diagnosing it,…

“Often mysterious” is dismissively misleading and hateful. No more. We fight back against this bullshit.

A life expectancy of 36 is cause for celebration! Oh, wait..

If there’s a possibility of a way out and you don’t give that to your child (to at least try it.. many won’t) but continue to let them live with that disability, it says a lot about you a parent. Recovery is real.

What a butt munch, living in his Rain Man delusion.

I had a skin mole removed for cancer. So I've had cancer.

My friend died of tumors that disfigured his head and caused a slow, agonizing death. Can I claim to have the same experience as him? No …

I been seeing this a lot lately, what the hell is wrong with people? Sadly most of the comments I see are from parents of autistic children.

I've heard so often that it is just a variation of normal, and that we are shaming and discriminating if we say otherwise. They want to "normalize" it. No, we can love and support without saying it's normal.

Absolutely!! Disabled individuals are disenfranchised Enough! Denying them their disabled status will deny them Needed funding and accommodations to Live and function in an already exceedingly difficult

Clearly these people have not been up at 3am scrubbing poop out of carpets, ceilings, walls, bedding and hair. We never once thought “this is so special” or considered making an art installation of it because it was such a gift.

Don’t mention recovery even though there are documented cases!!!

So is this 2 people essentially on the same side fighting each other over semantics?

Thank you! My son, high functioning, absolutely struggles daily. It is gut wrenching when people deny the disability aspect. We can both hold hope and be proud of their accomplishments while also recognizing it for what it is. But we are living in …

I'm in this mood today too after seeing a commercial with a woman embracing all her differences and being loud and proud about it --and talking about her neuro-divergence.

And, really, good for her... but it's the whole "Neurodivergence" bull shit --w…

Sounds to me like many of these unique and intelligent human beings, whether they're labelled as disabled or not, are angry, frustrated and screaming out for help. Thank goodness we're still trying to figure what exactly is going on and why this is ha…

They’re correct. Stop trying to legitimize the damage done to us, and our children. It keeps us from getting the acknowledgement and help we need.

Trying to normalize the epidemic they created

An “ability” that you can chelate and recover from.

Nice to be clumped in with AS. Ugh.

Hi BIll,
I am so sorry if you have to deal with those kinds of health problems and also with rude strangers. If they are rude, the bad manners ( and shame) belongs to the rude person, not you. Also some people have a hard time with social interactions, or dealing with differences, and they can stare unintentionally or not mean to be rude, but are.
Hope you find some things in your life to give you joy; a good antidote to hard to overcome challenges. You are in my thoughts
Hera

A little bit off topic, but does anyone give their autistic loved ones Fiji water to detox the brain from aluminum?

"Healthy young people are dying suddenly and unexpectedly from a mysterious syndrome - as doctors seek answers through a new national register
People aged under the age of 40 being urged to go and get their hearts checked
May potentially be at risk of having Sudden Adult Death Syndrome (SADS)
SADS is an 'umbrella term to describe unexpected deaths in young people'
A 31-year-old woman who died in her sleep last year may have had SADs "
https://www.dailymail.co.uk/news/article-10895067/Doctors-trying-determine-young-people-suddenly-dying.html
The latest coverup for the clot shot?

People who suddenly drop dead are just DIFFERENT.
Let's not be morteophobes.

Hannah Polling showed that it is vaccine induced encephalopathy causing most of the "autism-like symptoms. The body reacts with inflammation in the brain and other areas. It is part of the immune system run amok due to the artificial stimulation/metal poisoning from the jabs. Dr. Goldberg's immune modulators are SSRI's. I would stay far away from them.

The part about comparing a minor skin cancer that was cured with a surgery to a more painful deforming facial tumor that caused someone slow deaths is exactly what people with Neuro fibromatosis/Tuberous Sclerosis go through every day. Death from fatal deforming tumors on our bodies and rude relatives and strangers with easier to control and even cure cancers complaining about minor surgical scars while NF related tumors cause almost certain death when they become cancer and deformity and pain for years and can never be "cured" At least 10% of those with Neurofibromatosis have autism by the way so get used to it. Some cases of autism are in part from genetic disorders look up the condition and empathize with Neurofibromatosis /Tuberous Sclerosis or NeuroFibromatosis /Tuberous Sclerosis with Autism parents and children and young adults. that have NF/TSc and NF/TSc and autism. Just because someone has a few opinions in common with Neuro-diversity activist does not mean they are so irrational as to deny autism and any disability's potential seriousness or that that person agrees with all Neuro-diversity opinions.

I agree with Maurine. Musk has said and done some good things and may actually be a "good guy" (more or less) but he also plays to the crowd. And high achievers who claim some form of autism are, unfortunately, crowd pleasers right now.

I've seen him speak on a panel and there was nothing in his manner that suggested autism or Asperger's to me.

This is one of the few sites that tells the truth about autism. I probably have “mild” autism but it is definitely a disability. It effects every single part of my life every day.
Autism is not some quirky “difference”.

Exactly why Musk getting up and telling the world he has autism(Aspergers to be specific) is a red herring for the autism community. No doubt Josh will become a billionaire anytime soon.
Maurine

My adult son with autism relies on me also for all his daily needs and does not function independently. He is under guardianship and also has epilepsy. He sometimes wakes from a bad dream during the night and screams and hits his head. He lives with us so we know he is safe and protected and we have complete control over his care. This is not a difference, but a true disability. I worry about his future and hope for a miracle cure while we are still here to take care of him. Please read Dr. Goldberg's book "The Myth of Autism" published by Skyhorse Publishing that states our children/adults are suffering from an illness he calls "neuroimmune dysfunction syndrome" He says the answer is medications called "immune modulators" that can cure this illness and he needs us all to spread the word all over any social media sites you use. There is hope if he can succeed.