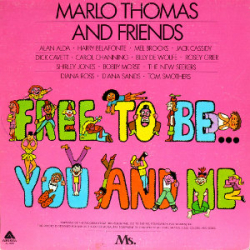 A year ago, Americans lost their jobs and their right to attend restaurants, concerts, sporting events and other activities if they did NOT choose the Covid vaccine.  Americans did not have the right to say no, which is a choice. Yesterday, we had another version of change in choice with the SCOTUS decision on Roe v. Wade. The right to say yes was affected. The divisions between Americans are growing by the minute. Up is down. Left is right. Right is middle. Middle is long gone. Imagine my surprise when my daughter started listening to a single song on YouTube, a song I hadn't heard in many years. Free To Be You and Me. The song debuted with a book and full album in 1974 as a way to bring Americans TOGETHER in understanding and acceptance. Back in those days, the topics were "simpler." Black, white, boys and girls. End racism. End sexism. Seems quaint by today's complicated standards. But I think that Free To Be You And Me has more value then ever. As a look back, it shows we could and did make progress. As a look today, it shows we still need more. One group near and dear to our hearts, has been left behind in the society of free choice - those who chose not and/or are unable to vaccinate per the CDC guidelines. If medical choice matters, it has to matter from all sides, does it not?  If you've never watched Free to Be You And Me - or listened to the lyrics of each star-studded song, I encourage you to take trip back to 1974.

Free to Be... You and Me is a children's entertainment project, conceived, created and executive-produced by actress and author Marlo Thomas. Produced in collaboration with the Ms. Foundation for Women,[1] it was a record album and illustrated book first released in November 1972 featuring songs and stories sung or told by celebrities of the day (credited as "Marlo Thomas and Friends") including Alan Alda, Rosey Grier, Cicely Tyson, Carol Channing, Michael Jackson, Roberta Flack, Shirley Jones, Jack Cassidy, and Diana Ross. An ABC television special, also created by Thomas, using poetry, songs, and sketches, followed two years later in March 1974. The basic concept was to encourage post-1960s gender neutrality, saluting values such as individuality, tolerance, and comfort with one's identity. A major thematic message is that anyone—whether a boy or a girl—can achieve anything.

Many here in California do not want our tax dollars going to pay to dismember babies in the womb and scar women emotionally and often physically for life. The governor here was disingenuous when he said he believes in a women's right of what is done to her body. I asked his office if he supports a woman's right of what is injected into her own body and they said they did not know. I asked if that includes the women in the womb of what is done to them. Our daughter talked to her friend who at 14 years old had an abortion and described a horrible thing done to her and they practically pushed her bleeding to a bus stop. They did not care what happened to her. I had a friend who had an abortion and has regretted it for life.

"Abortion should be safe legal and rare."

Unfortunately it isn't and never will be.
Now it is up to each state to decide the fate of the unborn.
If you want uninhibited access to abortion just move to New York or California.

At the risk of being deemed cynical I’m now left wondering if efforts like Free to be You and Me were part of some slow, orchestrated decent into the chaos we see now.
In a way it’s hard for me to get behind the pro choice movement lately in that it seems like they have erased and trivialized womanhood at this point: ‘pregnant people,’ ‘menstruating people,’ ‘lactating people’…they seem to like to pick and choose what aspects to control and as others have pointed out we have been bullied and threatened into injecting experimental products in our bodies.

So I wanted to see a concert today in my hometown and even though I have had 2 children they asked to see a bloody tampon before they would let me in. And I had to prove it was mine wifh DNA testing and ID.
Oh wait I meant, even though I had actual Covid, I couldn’t get into the concert without a vaccine record and my ID.
Silly me for thinking that intrusions into medical freedom and privacy about your reproductive situation mirrors that of whether you want to plunge a foreign needle into your body.
Silly me. Steel these ideas make them into memes.
In honor of my grandma who lost a forming baby at 5 months pregnancy when a fireball blew up from an old stove, and never finished mourning it yet an Irish Catholic who believed in abortion after she saw the abuse a neighbor inflicted on an unwanted child and she couldn’t rescue him. Abortion should be safe legal and rare. And no one should be forced to take shots. These two things are consistent and true.
She believed both as her 3rd son went into seizures after a vaccine given in 1940. He lived but had ADHD something unusual at that time. Will we ever learn?

Attorney Aaron Siri skillfully puts Stanley "Mr. Vaccine" Plotkin's back to the wall and he spills the beans on where they originally grew the virus for vaccines way back in 1963 - BEFORE Roe v. Wade. Abortion was ILLEGAL in the U.S. at the time.

I think The High Wire has archived all 9 hours of his testimony. I watched them all and all citizens should too.

And he still refuses to be vaccinated,a winner through and through.

Novak Djokovic has stated he will not take the Covid vaccination even if it means he is banned from another Grand Slam at the US Open.

I’m curious to know if pro-mandate zealots believe the unvaccinated should have access to abortion care?

My childhood friend next door had this album and we would listen to it over and over.
It is positively stunning that so many cannot see the correlation between vaccine choice and abortion choice. Either we have bodily autonomy or we don’t. We certainly should.
Last week Del Bigtree played a clip of a “man on the street” asking questions at a pro choice rally. The man asked several people who were holding signs that said “my body my choice” if they thought people should have a right to say no to the Covid vaccine. Most looked stunned by the question. Some said… “well that’s different” Really???

I know this album by heart - the messages were awesome, unlike today's message of "it's OK to make permanent changes to your body and don't worry about the consequences - do whatever you want." The message instead was, don't worry about cultural stereotypes so much, it's ok to be a kid and relax in who you are - you're fine just the way God made you" Males who cry or like to cook or dress fancy are no less "male" than those who don't. Females who like to compete in athletics and follow their own interests and think for themselves are still "feminine" - and to be accepting and respectful of each other's individuality. Adults may try to pressure you to be a certain way, but they don't know you as well as you do, you're fine just the way you are.... way different message than today's message.

Im only a few minutes into watching this video, and Im crying sadness at the media-driven social decay driven today by the globalist satanic pedophile death-cult machine operators. Really. Read that again, and THINK, you brain-washed sheeple puppets! No, not you few blessed AoA regular readers! I will CAREFULLY watch the WHOLE video later...
KEEP UP THE GOOD WORK, PEOPLE! May God continue to bless you all!