Home Donate Contact Us Special Reports Science Email Subscription 2021 RSS Feed 2021 Our Mission
The British Government, the World Health Organization and the Global Coup of 2020
Gut Science Was Slower Than A Colon After Surgery

Many Infant Deaths Classified as SIDS Are Actually Caused by Vaccines 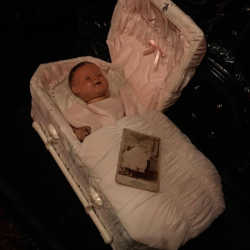 Crib death. Cot death. SIDS has been a formal cause of death since 1969.  It's hard to imagine a deeper pain. Today, we have SADS - and you can guess what the A stands for - adult. Healthy young people, not infants, dying of "natural" causes. As always, thank you to Dr. Gaunt for speaking out on behalf of pediatric health and wellness.

Sudden Infant Death Syndrome (SIDS) is defined as: “The sudden death of an infant under one year of age which remains unexplained after a thorough case investigation, including performance of a complete autopsy, examination of the death scene, and review of the clinical history.” It is the leading cause of death in children between one month and one year of age. As we see in the definition, the cause of SIDS is unexplained or unknown. This classification is a convenient place to hide infant deaths caused by vaccines.

There are 130 official ways for an infant to die. These are listed in the International Classification of Diseases and are sanctioned by WHO and CDC. Before 1979, one of the possible causes of infant death was vaccines. After 1979, all cause-of-death classifications associated with vaccination were eliminated. (Thanks to Neil Z. Miller for this and other information used in this article. He published “Vaccines and sudden infant death: An analysis of the VAERS database 1990-2019 and review of the medical literature” in PubMed Central Toxicology Reports on June 24th, 2021). Before 1979, a coroner could choose vaccines as the cause of an infant death if the evidence fit that conclusion. After 1979, vaccines were no longer one of the accepted causes of infant death and the coroner would be forced to choose another cause of death. SIDS would be a likely alternative choice. It is not a stretch to assume that the vaccine companies had a hand in eliminating vaccines as one of the accepted possible causes of infant deaths.

The CDC vaccine schedule calls for the hepatitis B vaccine to be given on the day of birth. At 2 months, it calls for 8 vaccines (diphtheria, tetanus, pertussis (DTaP), polio, hepatitis B, pneumococcal, haemophilus B, and rotovirus.) At 4 months, it calls for 7 vaccines (DTaP, polio, pneumoccal, haemophilus B, and rotovirus.) Then at 6 months there are 9 more vaccines on the schedule (DTaP, polio, hepatitis B, pneumococcal, haemophilus B, flu, and rotovirus). No worries that 7 to 9 vaccines given to an infant at one time might kill some infants. The authorities routinely exonerate the vaccines and encourage the selection of SIDS as the appropriate cause of these deaths. VAERS (Vaccine Adverse Events Reporting System) data shows that more than 78% of reported infant deaths occurred within the first 7 days post-vaccination. This does not prove that vaccines killed these infants, but it is highly suspicious.

Miller’s article details this sad history: “In the 1960s and 1970s, Aborigine infants began to mysteriously die at alarming rates. In some regions of Australia, 1 in every 2 babies succumbed to an unexplained death. Archie Kalokerinos, an Australian physician, solved the riddle when he realized the deaths were occurring shortly after the babies were vaccinated. Health officials had recently initiated a mass vaccination campaign to protect Aborigine babies; their deaths corresponded with the vaccination program. Kalokerinos realized that these babies were severely malnourished. Their immune systems couldn’t handle the additional stress of vaccination.” Another historical example occurred in Japan in the 1970s. Japanese authorities raised the age of first vaccination from 3 months to 2 years after several babies died following pertussis vaccines. After this change, the sudden infant death rate following vaccination improved by 90%.

Vaccine Court Is Not a Level Playing Field but Sometimes Gets It Right.

In one case, an African American male infant (JB) received seven vaccines at his 4-month well baby visit. He died the next day. The medical examiner stated that the cause of death was SIDS. After hearing the evidence, the vaccine court Special Master stated in his decision: “I have concluded that the petitioners have demonstrated by a preponderance of the evidence that the vaccines can and likely did play a critical role in this child’s death by stimulating the production of inflammatory cytokines that suppressed the respiratory response and caused the vulnerable infant to be unable to respond in the normal way to the accumulation of carbon dioxide in his system.” Most cases of alleged vaccine-caused injury or death get rejected by vaccine court. The evidence must be overwhelming and irrefutable for the petitioner to have any chance of winning the case. This case was originally classified as SIDS, but solid evidence proved that vaccines caused this infant boy’s death.

In Some Cases, Vaccines Kill the Infant but One of the Parents Is Sent to Prison for “Shaken Baby Syndrome”

Miller states: “Some infant fatalities that occur shortly after vaccinations are incorrectly classified as shaken baby syndrome.” He mentioned Dr. Michael Innis who has testified in such cases and has stated: “Vaccines administered within 4 weeks of the onset of symptoms are the most common cause.” The vaccines killed the baby. The parent did not kill the baby. It doesn’t get much worse than this: the parents lose their child who was killed by vaccines then are unfairly charged with the baby’s death.

“Lessons from the Lockdown”

This is the title of an article from Health Choice by Amy Becker and Mark Blaxill published on June 18, 2020. They point out that during the lockdown, U.S. mortality rates declined among young people, especially among infants. Why are fewer children and infants dying? That is a great question which deserves answers. In their paper, they state: “One very clear change that has received publicity is that public health officials are bemoaning the sharp decline in infant vaccinations as parents are not taking their infants into pediatric offices for their regular well-baby checks [where vaccines are routinely administered.] In the May 15, 2020 issue of the CDC Morbidity and Mortality Weekly Report (MMWR), a group of authors from the CDC and Kaiser Permanente reported a sharp decline in provider orders for vaccines as well as a decline in pediatric doses administered. These declines began in early March 2020, around the time infant deaths began declining.” They ask: “Are fewer children dying because their parents are skipping their routine childhood vaccines?” That is another great question. The result appears to be that hundreds of infant injuries and deaths were avoided by not getting the well-baby 7 to 9 vaccines at one time.

My conclusion: Giving multiple vaccines to infants at 2 months, 4 months, and 6 months is dangerous but that is what is done in the U.S. Vaccines are killing some infants and most of these deaths are being mis-classified as SIDS. Infants who are injured but not killed by receiving several vaccines at one time may end up with developmental disabilities such as ADHD (Attention-Deficit Hyperactivity Disorder), tics, seizures, learning disabilities, or autism. Vaccines are extremely profitable, and profits are far more important to vaccine companies than the health and wellbeing of children. That is sad but true.

About the author: Dr. William H. Gaunt is a retired Doctor of Naturopathic Medicine. He is a graduate of the University of South Florida in Tampa. He was a U. S. Navy helicopter pilot and later an instructor pilot for the Iranian Navy and the Saudi Arabian Air Force before attending medical school at Bastyr University near Seattle, Washington. Dr. Gaunt graduated with honors in 1983. He has also taught chemistry, biology, and anatomy at high school and college levels and published several articles related to vaccines. Dr. Gaunt and his wife have five unvaccinated children including a girl adopted from China.

“No. The vaccines are not safe for any mankind including babies.” :

Babies and Vaccines, by Rappoport
https://blog.nomorefakenews.com/2022/06/16/the-babies-and-the-vaccine/

Susan & Julie, thanks for the information.

Sadly, I think a lot of sound vaccine research could be done through the funeral industry.

Hi "Still With Trump" I also recall a study which showed SIDS spikes at 2, 4, and 6 months. I looked for it today but couldn't find it. If anyone knows about that study, please let us know in a comment.

Still With Trump. This is research from Neil Z Miller

Still with Trump, there was also an Australian scientist, Vera Schreiber who found a similar correlation. Of course, she was 'discredited' as anyone in Australia would be. We are the fastest in the world to 'discredit' anyone sceptical of vaccine safety and efficacy. We beat the US hands down (I think the UK comes a close second). I'm sure I have information on her in my 'vintage' vaccine information folder.

Thanks for this. I am one of the lucky ones. I was born 1965. after my 2nd whooping cough jab i had a severe reaction. i cried for hours until i went to 'sleep' on my mothers shoulder - she happened to notice in the mirror that i had gone blue. I had stopped breathing. My aunt who lived with us was an SRN, she found that there was no pulse and gave heart massage and mouth to mouth whilst waiting for help. The vaccine i had was replaced in the 1970's due to the high number of deaths. My younger brother had no vaccines due to this and was considered the healthiest of the family - the youngest of 8 children. i never gave it much thought until our 2nd child had a bad reaction to her 2nd DTAP - it was scary. thankfully she had no lasting damage that we know of. There is no justification on any grounds for not carrying out a thorough review of the whole vaccine program and its links to chronic disease, injury and mortality. if there is no link, the industry has nothing to fear from such a study. But we know on here the truth, We are eyewitnesses.

Was their not a simple study that look at the days lived by infants dying of SIDS, that showed spikes at 2, 4 and 6 months rather than a simple smooth curve through the first 6 months of life ?

Seems it was done in Texas. If if was not related to vaccines it would have been a smooth curve. No follow up by the CDC of course.

In 1984, I had saved a newborn
babies life, as it had been (mistakenly)
placed face down on its nursery bed.

I watched him struggle to lift his head
from a side position, then plunge face
down into the mattress—unable to
move from that position.

After rushing to get a nurse, the baby
turned a bit blue by the time she had
reached him, to place him on his back.

As for vaccines and babies, the shot
schedules amount to a deadly TOXIC
overload !

It will be no doubt gag-worthy watching the usual suspects spin this:

I very much doubt that this so-called sids was around before vaccines were introduced. Why should a baby die suddenly and unexplained?