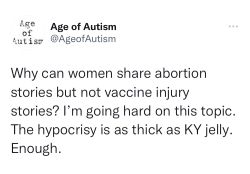 I asked this simple question on Twitter and Facebook. Why can women share abortion stories but not vaccine injury stories? Roe v Wade has been catapulted into the headlines, after a SCOTUS information leak about a pending decision. Ironic that tomorrow is Mother's Day.  Choice. That's the topic. Some get choice, others don't. Some approve of it, others deny it. Is it complicated or simple? Does choice mean choice, even if anathema to your ethics or beliefs?

Below is an example of the stories circulating while we’re censored, shadowbanned and deplatformed. 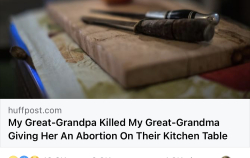 I wonder what kind of parents they would have been if their child was "normal"?
This is horrific. Did the parents just snap?

You are bringing up what you consider to be points of great religious hypocrisy. In many ways, all wars are religious wars. Sinful man is at the heart of it. The Law was given by God through Moses to reveal our fallen sin nature. We cannot perfectly keep the law. We will die in our sin. Is there a remedy? The Maya of South America were practicing human sacrifice from at least AD 250-900 through the final stages of the Spanish conquest in the 17th century. "Blood was viewed as a potent source of nourishment for the Maya deities, and the sacrifice of a living creature was a powerful blood offering. By extension, the sacrifice of human life was the ultimate offering of blood to the gods, and the most important Maya rituals culminated in human sacrifice. Generally, only high-status prisoners of war were sacrificed, with lower status captives being used for labor. Somehow, these ancient Mayans believed things would go better for them if they gave human blood to their gods." https://en.wikipedia.org/wiki/Human_sacrifice_in_Maya_culture
But did it work?

The Hebrews also practiced blood sacrifice, but only specific animals were sacrificed, never humans. According to the Torah, the sacrifices would atone for (or cover) specific sins with specific sacrifices. Not all were blood sacrifices. After the fall of Jerusalem, in AD 70 (I think), there was no Temple to perform the ritual sacrifices in, so their descendants no longer practice this type of sacrifice.

Is abortion a form of human blood sacrifice? When an unborn human is aborted, is there blood? Is there a sin that is covered? If the child was the result of rape or fornication (considered a sin by God), is the sin covered by shedding its blood? The child would be physically hidden from sight, but would remain in the mind of the mother. Would he remain in the mind of God? Would God be pleased?

Through Adam, Abraham, Issac, Jacob, and Moses, God has promised fallen mankind a deliverer. A man, who would take the place of a sacrificial lamb. One whose blood would be offered as an eternal covering of our sins, only if we believe he is the Son of God, chosen to come to Earth for this purpose. This is the only acceptable human sacrifice to God, and the only acceptable covering for our sin. But because He is God and without sin, He overcomes death and has eternal life with God the Father. He gives us a free will invitation to join Him. No forced conversion or Inquisitor can deliver you from sin and into the Kingdom of Heaven. It is only the free will choice of the soul of the individual, based on faith in the Redeemer.
Are your sins covered?

"Romans 3:20-26
20Therefore by the deeds of the law there shall no flesh be justified in his sight: for by the law is the knowledge of sin. 21But now the righteousness of God without the law is manifested, being witnessed by the law and the prophets; 22Even the righteousness of God which is by faith of Jesus Christ unto all and upon all them that believe: for there is no difference: 23For all have sinned, and come short of the glory of God; 24Being justified freely by his grace through the redemption that is in Christ Jesus: 25Whom God hath set forth to be a propitiation through faith in his blood, to declare his righteousness for the remission of sins that are past, through the forbearance of God; 26To declare, I say, at this time his righteousness: that he might be just, and the justifier of him which believeth in Jesus.
https://www.kingjamesbibleonline.org/Romans-3-23/

There Is A Redeemer
https://www.youtube.com/watch?v=7w_K9vTIGHY

If the fanatical C---- is so "pro-life" then why the violent conquest and of the Americas with millions of deaths from 1400's until the 1800's. The C--- forced "Latino-fication" and "Anglo-fication" of Native Americans in places like Canada,Guatemala and Peru even in these days? The C--- in Ireland killed thousands of children (or at the very least caused their death through massive criminal negligence) of mostly unwed mothers through starvation and forced labor well until the 1970s. There were also C--- run incidents mainly through orphanages including experiments that included things like poor quality vaccines and other medicines with radioactivity that caused hundreds deaths

Since the doors are already defaced, why not add "NO COVID JABS" at the bottom:
https://www.breitbart.com/politics/2022/05/06/vandals-desecrate-colorado-catholic-church-with-pro-abortion-messages/

Is Richard Pan (or whomever is the bill sponsor is) putting a provision in the bill to explain to 12yr old children what amorphous aluminum hydrogy phosphate sulphate is? It seems 12yr old impregnated girls are more protected than unvaccinated for HPV 12 yr old girls are?!

"Born in India, Vijaya Gadde moved to the US as a child and grew up in Texas where her father worked as a chemical engineer on oil refineries.....(she) completed her high school in New Jersey. A graduate of Cornell University and NYU Law School." Gadde spent 10 years with a Bay area law firm working with tech startups before joining Twitter in 2011. She was responsible for permanently suspending President Trump from Twitter. Obviously, she is still at work.
https://timesofindia.indiatimes.com/nri/vijaya-gadde-indian-american-who-spearheaded-suspension-of-trumps-twitter-account/articleshow/80207019.cms

Gadde appears to be targeted for removal by Musk:
"One of the targets reportedly is Twitter's "censorship" chief, Vijaya Gadde, who makes $17 million a year and "is seen as the leading advocate for censoring conservatives at the social media giant."

Former Clinton associate founded Media Matters appears to be leading the assault on Musk by trying to shut down Twitter. Here are the details of their tactics:

Elon Musk being warned censorship cabal coming after him too
Strategy includes 'fact-checkers' and 'attack dogs' to chase advertisers away
https://www.wnd.com/2022/05/elon-musk-warned-censorship-cabal-coming/

If they can't get them with abortions, they now have Remdesivir for newborns: Fauci's Choice
https://rumble.com/v10miez-world-premiere-watch-the-water.html

As California is primed to begin to allow 12 yr olds to be coerced into having products injected into them without their parent’s knowledge, I wonder how many pro-(abortion)- choice parents are put in the position if having to vote for anti- choice candidates to protect the children they have. Another sick and cruel irony of the world is that one of the largest cohorts of women seeking to terminate a pregnancy are mothers.

As valid a news story as the "leak" may be, the TRUE PURPOSE of the story is to PACK the news cycle, and thus keep other, more important stories out of the public's consciousness. Vaxxx injuries are one of the more important stories being CENSORED by big media.... It's that simple, but has PROFOUND meaning....

If abortion weren't a massive industry, I wonder if there would be more censorship. The story you screenshotted (about the great-grandma dying because of a DIY abortion) basically says, "DIY is bad. Abortion clinics are good." It's almost like ivermectin vs. remdesivir or corona injections. The expensive, corporate thing is promoted; the inexpensive thing is censored or portrayed as deadly and insane ("You're not a horse"). (I'm not advising DIY abortion--I'm just saying that Planned Parenthood and clinics all over America benefit financially from stories like these being shared, while vaccine injury stories can only hurt Big Pharma.) In the end, it's all about the big dollars.

On a related note, if Roe is overturned, I think we'll all be better off, because abortion (legality, regulation, the whole kit and caboodle) will be an issue for state governments, and presidential elections can be about something else. People who have supported one of the two heads of the two-headed, one-party monster because of the single issue of abortion (either pro- or anti-) will be free to take their votes elsewhere. In my own circle, there was quite a lot of talk during 2016 and 2020 about the importance of the presidential candidate because of the Supreme Court.

Can you imagine presidential debates that touched on issues like environmental health hazards? funding for the now-adult cohort of kids with autism? pharma liability for vaccine injuries?