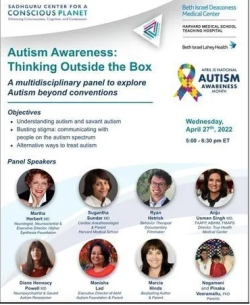 Here's the Cliff Notes version of Katie's perfectly pitched post: The "#actuallyautistic nothing about us without us" army is rabidly against our profoundly affected children. And institutions cower and collapse rather than FIGHT for our kids.

We need to add the letter "A" to LGBTQRSTUVWXYZ and make sure our children's genitals are mentioned frequently to be on the cancel culture good list.  Maybe I'll dye my girls hair rainbow so that the likes of Kristin will notice them. Violently ableist.... Spend a day with one of our strapping adult males during an autistic episode and then talk to us about violence, Kristin.  The Ivory tower is actually made of cotton - and plugged into their deaf ears.

So many people hate the politically correct elitism of places like Harvard. But Harvard makes it so easy!!

A few weeks ago, the Sadhguru Center, a TEACHING hospital associated with Harvard offered panel called, “Autism Awareness: Thinking Outside the Box.” It could not sound more innocuous.

The panel described itself as a multidisciplinary discussion to explore autism beyond conventions. Sounds good to me. As a parent of a young man with severe autism, I have spent too much time educating doctors on the basics of autism. Apparently, they learn next to nothing about autism in medical school. Approximately 5% of American boys diagnosed with autism and almost half have chronic health problems.

However, Harvard sophomore Kristin B. King went ballistic about the autism panel . This young woman claims to have autism. I know, I know......Lately, any smart, lonely, quirky, nonconformist labels themselves “autistic.” Almost none actually meet the DSM definition of autism. It is a disabling condition and makes communication and social interaction especially challenging. Not so for King! She rails against the conference, creates petitions to stop it, bullies Harvard administration.....I know, it’s absurd.

King declares, “One of the panel’s goals is to treat autism. That is not only violently ableist but scientifically incorrect!” Oh my God, King’s histrionics make me wince with embarrassment for her. This is a bright young woman throwing a temper tantrum and demanding discussion she does not understand be cancelled.

What’s worse is that the teaching hospital caved to King’s bullying nonsense and cancelled an educational autism event that dozens of doctors should have attended. What cowards! Then they basically apologized! “We are pausing, deeply reflecting and learning before we consciously take next steps, “ said a Sadhguru Center representative.

Why capitulate to a historic 21 year old with, clearly, no real expertise with autism. My son cannot read, write, speak or care for himself in any way. He needs and continues to need treatment in the form of speech and occupational therapy. Like nearly half of ASD people, he also needs regular medical help for his epilepsy and IBD. This treatment is not “violently ableist,” it is essential to his well-being.

But no, the only “autism” that matters is Ms. King’s. I would suggest that if she doesn’t like the panel a) don’t go or b) create your own panel. This is the commonsense advice Harvard was afraid to give King.

King’s partner is censorship and victimization is another young woman, Nina Jensen. Jensen is also “autistic” and a Harvard student. I know, I know...! Jensen said, “Its really sad to see Harvard is not taking responsibility for this.... we need a better policy for how to avoid putting something like this in the weekly newsletter.” Jensen appears to wants communist style struggle sessions. She demands accountability for the fact that ideas different from her own appeared in the Harvard newsletter.

What is wrong with these cruel and self-righteous young women?? How, in 2022 can you fail to be aware that autism (as lived by people dx with the condition) is a serious disability for many or most. My son is typical of 25% of the spectrum. He is nonverbal, struggles with self-injurious behavior, has np awareness of danger and must be supervised 24/7.

But King and Jensen do not want anyone to learn about how to better help autistic children like my son, because “talking about

treating autism is a toxic narrative. There isn’t anything wrong with being autistic.” Guess what ladies, that’s YOU, not everyone with autism. Allow other experiences of autism to be heard.
The duo take special aim at proposed panelist, Marcia Hinds, a Mom of a child who regressed into autism. I know too much about this. The pain one feels watching your typically developing toddler lose all their language and skills, brought me to my knees. The ability of your child to have a free and ordinary independent life disappears before your eyes.
But no matter what, King designates herself as the victim and was determined to censor what she has not experienced. “I’m hoping this even came from a place of ignorance (the irony!!!) rather than malicious intent!” Malicious intent ? To educate doctors about autism? King met with representative from Sadhguru and demanded, “education, reparations and a public apology.” Reparations??? For proposing a discussion?
It is shameful that privileged, arrogant, selfish, misguided young women were able to bully Harvard and a teaching hospital into submission. Through this act medical professionals were denied the opportunity to learn about autism, a very disabling disorder.

Why does her voice count for so much? Just because she is loud? Wow.

Katie I am sorry about the epilepsy.
It is tough, cause the medical profession is out to beat your wallet to death in even seeing a neurologist let alone the EEGs .

Nefarious, flagrantly wicked, impious, evil. malicious by these these two baby girls are coming through two things. First; is just more of a chance to claim victimhood (something that is very desired for some reason and has been going on for a while? I do not understand it, even when it showed up at my door step, full in my face.

My old friend from college; a doctor, married to a doctor were all bent out of shape because people told Polish jokes and she is first generation here, and her husband was sure there are some prejudices for the Latinos since he is first - well actually he was born in Cuba so he is not first generation. His parents brought him in to the United States when he was - 4 or something.
But they were Poor victims. You want to see judging by other people try pronouncing an I really long and soft in the words, Mike, Bike, Kite, tight, to a doctor when you tell about how this seizure came about from a vaccine some years back. True victimhood is a real bitch.

Second; they are tied to the pharma company in some way. THey may be young but they have long since grown the teeth and claws of a predator and know to be successful as a Harvard Man - it has to be cut throat, willing to do what is needed to have the money in their pocket.

The only thing you have to have a bit of worry about is for their young souls, for they have years to build link of chain onto link chain of sin.

The biggest problem is the shared label.

And I believe that was the intent.
We must come up with a new name for severe nonverbal non-independent autism and get it into the DSMV. This is how the game is played.

They couldn’t stand a narrative where some recover because that proves is is environmental. They can’t stand a narrative where some don’t recover because that inflamed their guilt. (Dr William Thompson spoke of his guilt when he saw autistic kids).
Denial has been the mental response of pepetrators and victims to every crème ever that first occurred in childhood/babyhood.
Far less painful to call the truth tellers crazy, to gaslight.
We had this in our own family. To put us all against each other when some of us are slightly poisoned others of us far more so. This woman is she is on the spectrum is at high risk of having a much more impaired child. So so so sad for her arrogance. She could be making it better for that child some day. Instead she is literally blocking them from their future.

The needed panel would be called, "Help for the severely vaccine injured."

As a parent of a high functioning vaccine injured child with autism-like symptoms, I am not surprised at Kristin King's response. These students are targeted for heavy brainwashing, and because of their condition, they are highly susceptible. This happened to my now adult child. It is heartbreaking. One makes a total sacrifice to get their child to the high functioning level, only to be undermined as a parent. They turn your child against you and fill their heads with transhumanism nonsense. My adult child's success is bitter-sweet. Let's not become "us" and "them." We parents and our children have all suffered. Mine had many severe symptoms as a child, so I know both ends of the spectrum.

Katie, thank you for your analysis. I can hardly stand to follow this crap directly, and heavily rely on your timely reporting AND editorializing. The reason I rely on you is because taking care of our daughter with seizures, non-verbal autism, and uncontrollable behaviors is more than a full-time occupation.

How the hospital did not laugh out loud I don’t know!! “Violently ableist!” It’s like the craziest episode of “Portlandia!”

The fact that the teaching hospital cancelled it because of this woman makes the hospital about as culpable as Ms. King. Shame on Harvard, a place once so respected for its education.
Maurine