Vax Hard With A Vengeance 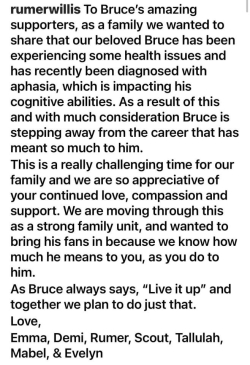 Actor Bruce Willis' daughter announced his retirement due to what reports indicate was a culmination of cognitive decline and now, aphasia. Like many, my first thought was "Oh no, I love Bruce Willis, how awful, I need to know more."

I remember the young, fast talking Bruce Willis of Moonlighting, decades ago. I hated to read of his plight. We of all people know about lack of ability to communicate. We know about regression into non-speaking. It's a horror.  I also went into territory most Americans don't even consider. Does the Covid vaccine have aphasia listed as an adverse effect?  I did a quick Brave search (No more Duck Duck Go or Google) the first hit was a case of a man who developed aphasia after his 2nd dose of an mRNA vaccine. https://pubmed.ncbi.nlm.nih.gov/34192245/

Then I went to OpenVaers.com and found 2,646 reports of Covid vaccine adverse events that include Aphasia.

We MUST be able to ask questions.  Consumers have a right to know that this side effect exists for this diagnosis they have never heard of.  We used to call that "informed" consent" before the Covid vaccine became a badge of honor or the lack of it became a of a mark of shame and societal exclusion.  Our President said he was losing patience with the unvaccinated. He said the unvaccinated faced a winter of “severe illness and death.” Harsh words. Dark admonitions. President Zelinsky hasn't been so blunt and cruel to his Ukrainian population.  But bombs don't carry the same global health weight as vaccination uptake.  Maybe Bruce Willis' terrible situation can help educate people not only on the definition of Aphasia, but one way it can be thrust upon you, beyond an unforeseen stroke or head injury out of the blue. No matter how Willis lost his way into dementia and lack of communication.

Objectives: Though rare, neurological side effects of SARS-CoV-2 vaccinations are increasingly reported. Even if the first dosage goes uncomplicated, the second dose may be complicated by severe adverse reactions as in the following case.

Case report: A 52yo male developed sudden-onset reading difficulty and aphasia 7d after the second dose of an mRNA-based SARS-CoV-2 vaccine. He had a previous history of myocardial infarction, arterial hypertension, hyperlipidemia, and nephrolithiasis. Blood pressure was slightly elevated on admission. Blood tests revealed mildly elevated D-dimer, pre-diabetes and hyperuricemia. Cerebral magnetic resonance imaging revealed an intracerebral bleeding (ICB) in the left temporal lobe. Aphasia resolved almost completely within a few days. Blood pressure values were normal throughout hospitalisation. Whether there was a causal relation between the ICB and the vaccination remains speculative but cannot be definitively excluded.

Exactly, Benedetta, those mysterious ‘A’ conditions are increasing for a reason. I rarely watch any of the morning shows but today I had one on. Something seemed pretty off with the pert host. She paused and faltered with words in a way that seemed concerning to me.
The WHO is trying hard to get a ‘Pandemic Treaty’ that will strangle any country with their ‘bio surveillance.’ They want countries signed on to this hell by 2024. Gates and Gavi are one of the top sponsors of course. Idiocy like counting cases, untested, unsuccessful vaccines will be forced. Countries cannot opt out. This is scary stuff, all this medical control against peoples’ will. World Council for Health org is speaking out on it.

ferroptosis inhibitor there are a lot of them. N acetyl cysteine is one of them.

Apparently Fauci who has been over a federal agency called "ALLERGY" and Infectious diseases they all know - evey last one of them about what part of the immune system is the problem . How to turn that part on, what turns that part on. We have an ancient immune like enzyme that is also found in some snake venoms, wasp stings and such. sPLA2iiA is what they call.

It is in wiki Phospholipases A2 (PLA2s). All those that have neurological diseases have high amounts of this stuff in their systems. Alzheimer, Mutiple sclerosis, Parkinson, Pervasive Developmental disorder (autism and it only took me 12 years to find that out) Lower back pain in the disc . And there is that slightly different variety in the heart.

And this is why Fauci that would not allow old and safe drugs to treat both HIV/AIDS and Covid 19, is all about pushing N acetyl cysteine out of the market.

My husband had many tetanus shots aka DPT - not saying that finally he has had enough. But the day he came out of the factory, and they waylaid him in the cafeteria to get his tetanus shot. That day, he went on home and went to his shed to get out the lawn mower. A wasp stung him right in the head.

I was gone at that time. I was working on my masters. I was too ambitious, I guess. HE walked into the living room and the next thing he knew he was in the floor, with his jaws clenching up uncontrollable. He crawled on his belly to the bedroom and bed. I guess he sezied all night long; that was my day I was not home.

We for years worried about a wasp sting. Well of course he got another, our life style is just that. Nothing, however three weeks after his next tetanus vaccine was the beginning of pain for all of his body, trouble getting his breath, Chronic fatigue syndrome -- Mitochondrial Oxidation phosphorylation on the Complex 1 and III.

The Bill star Chris Ellison's wife says she is 'in mourning' for him as they make TV appearance after going public with his aphasia diagnosis which has left him unable to speak
The actor, 75, has lost the ability to speak since he suffered a stroke 18 months ago and has been diagnosed with aphasia
It is the same degenerative brain disorder which movie legend Bruce Willis was revealed to suffer from last week

Please feel free to had more to the compare list.

Autism : has no cause, but it is probably the genes, scientists have found those genes, only to forget that they did. In a few years repeat, only to find different genes.
It is a real puzzle!

Please feel free to add to the contrast list.

Who knew …. "Aphasia" has always been common but is rising due to better diagnosis and broader definition …. just like AUTISM

"APHASIA: A language disorder that affects a person's ability to communicate.

It can occur suddenly after a stroke or head injury, or develop slowly from a growing brain tumor or disease. Aphasia affects a person's ability to express and understand written and spoken language. Once the underlying cause is treated, the main treatment for aphasia is speech therapy

APHASIA: A language disorder that affects a person's ability to communicate.

I wish Bruce well; he’s one of the guys that saves everyone, at least in the movies. Interestingly the latest court ordered Pfizer data dump is now out.

As the possibility of vaccine induced death and injury continues to not even get questioned, the fact that the world practices vaccine religion, not vaccine science, becomes more and more apparent. How much more harm has to happen?

Benedetta too right,but " speech therapy" when you have memory loss? rather go home and have a cuppa as the quack told us to do with him ,not that we ever listen quacks.

Angus what about the broccoli sprouts and is there some kind of sulfur drops I am suppose to put on them?

Every kind of vaccine reaction that covid vaccine has and seems to be showing up more; all those other vaccines do the same.

Dr. Peter McCullough said in an interview the covid injections accelerate death. Whatever underlying medical conditions a person may have are being accelerated. So could Bruce Willis have been suffering memory or language issues pre vax? Yes. Could the vax made it worse? Absolutely yes.

My son's neurologist told me 6 months ago he is seeing a lot of cognitive issues & vascular issues in his patients. He had no hesitation giving my son a medical exemption.

"Once the underlying cause is treated, the main treatment for aphasia is speech therapy."

Perhaps the vaccine made it worse, but Willis struggled with memory loss as much as a decade ago when movie directors reported he began to struggle to remember his lines.
Maurine