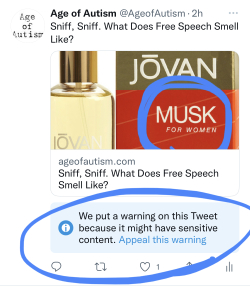 Like this, perhaps? Those of a certain age will remember Musk cologne  (pronounced Col-ogg-nee as if by Bill Murray on SNL) - as a popular scent decades ago when hippies roamed the Earth.  Now the hippies are shutting down free speech faster than you can say, "Don't eat the brown acid."

Of course, my Tweet about this, clever as it was, got marked as "Sensitive." I'm tired of the politicization of social media. Skew right, topple left, platforms should assume we are adults and can decide for ourselves how to conduct our lives. Many of us still have critical thinking skills. We don't melt when confronted with differing opinions.

Elon Musk is trying to take over Twitter.  Twitter is trying to vaccinate itself - ironically called a poison pill.

Dr Malone had a very interesting article that he titled: " Davos man vs populism."

I was surprised at how many new billionaires are made every - what was it 17 days.
Musk has been married three times, and has six sons.

At first I thought that it was like the Bible, Jacob had 12 sons; it never mentions any daughters, but then we find out there was one that did exist . That was a sad story, and Jacob to his dying days were upset and angry with his sons on how her story turned out.

But back to Davos man vs populism by Dr. Malone.

We are living in a world designed by Davos Man to direst ever greater fortune towards Davos Man.
The billionaires have financed politicians who champion the uplifting for the already stratospherically uplifted. They have deployed lobbyists to eviscerate financial regulations, permitting banks to lend and gamble relentless while depending on public largesse to cover their losses. They have defenestrated antitrust authorities, clearing the way for mergers that have enriched investment banks and shareholders, while bestowing oligarchic control upon large companies. They have squashed the power of labor movements, shrinking paychecks and handing the savings to shareholders"

Davos Man has managed to turn every crisis into an opportunity for his further enrichment. finding in dire public health emergencies and financial conflagrations a justification for public relief and implanting in every bailout a mechanism that steers public money his way. "

"Davos Man's gluttony is threating our entire ecosystem. His extreme over consumption has undermined faith in the governance, giving rise to rage among the other creatures."

Pretty much sums it up.

Except there is populism.
But all this reading I have been doing.

I want to know who on this web site told me that taking the niacin out of cornmeal was done on purpose? That was a century ago and since then we have the "Low fat diet" and I fell for it.

Thank you, Mr. Stone. I guess I'm assuming that if the infrastructure is put in place, Musk won't necessarily control it in the end, if he does now.

You seem to me not likely susceptible to this, but Twitter appears to me as a platform that simplifies (and tempts users) to rather thoughtlessly put out on the net what one is currently thinking (especially tempting those not thinking about being monitored/data mined by the tech companies involved or by those that can hack into these systems, or for those not caring much about what they tweet because they trust the public faces attached to the company).

I am not at all keen on Musk though it might be helpful if he busts the ever increasing monopoly of lies which surround us and maybe the transhuman project he describes has some affinity since he apparently wants to enable people not disable them like Harari and the bureaucracies who have us surrounded. Of course, what one would like profoundly is to be left alone with a non-elite democratic people the master of machines. So, I think one may view him somewhat more positively than the WEF if not with deep trust. I don’t care for his cars or his satellites.

(Maybe off topic, but good intent and good fruits/results are not aligning IMO.)

Something else Musk has said he wants to do:

Set up a digital version (in "the cloud?") of ourselves linked to our brains (something like that)? Musk seems to believe that humans will need this tech to keep up with/be on par with AI. That's how he talks. Other technocrats (like Yuval Herari) say free will is, or soon will be "over" (the "be happy" part IMO of the "by 2030 you'll own nothing and will be happy" we get from Klaus Schwab).

Remember CA state senator's SB18, eventually dubbed "Children's Bill of Rights" (1st a list of legislated "rights," then revamped to financially re-engineer California in the name of providing the children's rights, then the original "rights" attempted to be passed as a "resolution" (I think that was the term) that might be later referenced by legislation and sort of become law via a backdoor way)?

Was this neurolace one of the tech developments "the children" of California would have a "right" to have? Especially if something (like a vaccine) paralyzed some children and then they would have a right to be the early human guinea pigs for this type of technology?

But maybe these technocrats are even now already working on injecting aspects of this tech into us, a sort of "Warp Speed" version of SB18?

Freedom of Speech is now viewed as a threat by many in our country. A platform where both sides of an issues could be expressed is unacceptable. I think that anyone who stands up against censorship is on the right side of history.

*Language Warning* but had to do it, couldn’t resist.

Musk, to me, is much like Bill Gates about 20 years ago. People want to admire him because he seems to be a sort of American success story (don't we all want to be some sort of success story?), but I suspect he is more-than-not placed where he is. Space-X has tens of thousands of 5-G satellites irradiating our planet with energy pollution to facillate the absolute slavery level of surveillance the oligarchs want, all in violation of our rights and health. Being EM sensitive, I can find almost no place for true energy refuge, and I can't believe everyone isn't already paying in energy levels, etc. if not in terms of general health loss, as well. What right does he have to do these things, subjecting our planet and the human race either to an vast, ill-considered experiment? Or a vast assault, depending of how much he understands what he is part of. Seriously, I think he wants free access to our actual tweets (location data, etc), but I don't know how much the rest of the world will be able to see what we have to say just because he is moving in on the twitter space. These platforms IMO are most about monitoring and influence and if possible, complete control.

The censorship is absolutely stunning at this point.