Home Donate Contact Us Special Reports Science Email Subscription 2021 RSS Feed 2021 Our Mission
Imagine Having Kids With Autism In The Middle of a War
Sniff, Sniff. What Does Free Speech Smell Like? 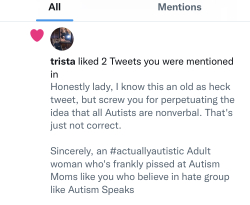 Every so often, I get a returned Tweet on my Kim Rossi Twitter account from an outraged autist (self-described) telling me that I shouldn't proclaim that all people with autism (my description) are non-verbal. I’ve never said any such thing. I don't use that account much any longer. Our Age of Autism Twitter account has over 36,000 followers - but we get few retweets because Twitter has tamped us down, and as of the last 2 months, slapped a warning label on every Tweet that has a photo or a URL link. But the news was abuzz this week as Elon Musk wants to buy Twitter. Can Musk help return open discourse and free speech? He says he will. But will he include "us?"

The world’s richest person, Elon Musk, Wednesday offered $43 billion — cash — to buy Twitter so he can “unlock” its “potential to be the platform for free speech around the globe.”  Read the full article at Children's Health Defense.

Free speech is so threatening to the elite few in charge. They know the truth will take the whole house of cards down.

I had the same thought Annie. I wonder if his surviving sons are vaccinated. I read about his first son's death as an infant, in an article written by his first wife. The denial of death and devastation has lasted for decades, it is past time for the public to say - NO MORE!

I always wonder if Mr Musk ever suspected vaccines as a causal factor in the loss of his first child.

I hope he does restore free speech to Twitter. The maimed & murdered deserve a voice.