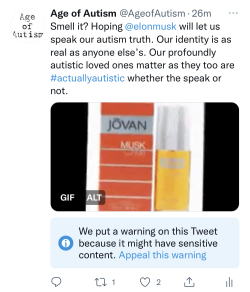 Yesterday, Elon Musk reached a deal to buy Twitter for $44B.  Over the last several years, millions of social media accounts have been deleted, shadow-banned, censored, call it what you will.  Age of Autism included. We were dropped from Google news indexing. Our 36,000 Twitter followers have to work hard to find us, and read us - we're slapped with a warning on every Tweet that contains a photo or link. Why? Well, for us, it's that we discuss vaccine injury. We always have. It's why we were launched, our raison d'etre to use the fancy French. It's simply not allowed today. Vaccines were NEVER allowed as an autism cause, and now, they are deified to a point where any criticism is doused immediately. Vaccination has become an orthodox religion. We aren't a far right site. Never have been.  We aren't a far left site. Never have been. Our readers cross all political strata, and our founder Dan Olmsted never wanted us to be political.  I hope Elon Musk opens the floodgates to everyone. Let the market weed out the rotten apples. Don't follow them. Block them. Or argue cogently to make your own point using facts and reason. I don't think Musk is a savior. He announced his Asperger's on SNL about a year ago.  He's an uber-rich, white tech guy. And we know another one who is the yin to his yang. That said, I would like to be able to Tweet again without a warning.

New York (CNN)Twitter said Monday it has agreed to sell itself to Elon Musk in a roughly $44 billion deal that has the potential to expand the billionaire's business empire and put the world's richest man in charge of one of the world's most influential social networks.

The deal, which will take the company private, caps off a whirlwind period in which the Tesla and SpaceX CEO became one of Twitter's largest shareholders, was offered and turned down a seat on its board and bid to buy the company — all in less than a month.

Under the terms of the deal, shareholders will receive $54.20 in cash for each share of Twitter stock they own, matching Musk's original offer and marking a 38% premium over the stock price the day before Musk revealed his stake in the company.

"Free speech is the bedrock of a functioning democracy, and Twitter is the digital town square where matters vital to the future of humanity are debated," Musk said in a statement Monday. "Twitter has tremendous potential — I look forward to working with the company and the community of users to unlock it."  Source: CNN

Communication cowards think "free speaks ?" is the wrong tweetment and a forbidden oinkment ?
Social media "Curtain Twitchers " prefer strictured -stitched -up- Silence !
Shut up those laughing eyes !
Sunlight is dangerous !
You can breath fresh air when we allow it ,unmasked?
Some want "The Bible" ,chucked on a bonfire !
Do the wee bullies and control freaks, not even realise, that the bigger they think they are ,then the further they have to fall !

https//christianconcern.com
Christian Concern-Home
News - School cancels support for charity after one complaint .
25 April 2022
"We Will Not Comply!" with Political /Corporate Cultural Community Cloroform ?
or Entertainment Ketamin /Pony Sedation !
The sunlight and laughter for free will, is enough to send some peoples "Gluts "in tae a sore spasm ?

Twitter Employees the Day After Elon Takes Over!
https://www.youtube.com/watch?v=-T0BQl_zzCE

Newly empowered with free speech, Dr. Kory responds:
"Dr. Pierre Kory, who has testified to the Senate of the effectiveness of ivermectin against COVID-19, fired back.
"You are not a horse, you are not a cow, you are Big Pharma's ass," he tweeted.
The FDA, he wrote, was "messaging BS" by citing "one corrupt study" while ignoring 82 trials, including 33 randomized controlled trials with 129,000 patients from 27 countries that show "massive benefits" of ivermectin in treating COVID-19."

Hopefully it will be a step forward with Elon Musk. He lost his first child to SIDS at about 10 weeks.

Not sure of the process, but all the deleted Autism / VAXXED / & vaccine damage clips deleted from YouTube the past few years need to be recovered and placed onto one secure site where they can be accessed.

Many will watch a short clip of a few minutes in length, sadly thousands of them are now gone.

The Tech Lords are the new Sugar Barons.....

Some are beginning to realize they have more power than the old barons.

Looking forward to the changes.
So tired of everything being called “misinformation.”