Home Donate Contact Us Special Reports Science Email Subscription 2021 RSS Feed 2021 Our Mission
What Does “April” Do For You?
Vax Hard With A Vengeance

Dance Til You Drop 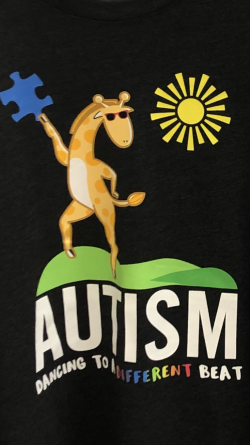 Dancing To A Different Beat

I saw this T shirt in the Men's department at WalMart.  Autism Awareness has become a joke of cheap, China made T-shirts that belittle the reality of the diagnosis from the most profound non-speaking person to the guy or gal who can not find a job or a lover or friends. Everyone suffers, even the #ActuallyAutistic "Nothing about us without us" crowd.

Having seen the world plunged into something a lot like autism in the last two years, my faith in real change from the top is long gone.  Autism is so 2010, it's passe. There's a new kid in town. The department of Health and Human Services flew a purplish flag supporting trans teens this week.

Parents are going to have to dig back into the well of creativity and hard work to craft an adult life for our kids.  I'd better get busy, I have a lot to do before I dance off to my grave.

Worse than the dancing donkey, perhaps, is the weird reversal of person-first language that the AMA is now testing out (https://jamanetwork.com/journals/jama/fullarticle/10.1001/jamapediatrics.2021.6036). The whole op-ed is full of half-truths and outright lies, but I'm including a few of the toppers here.

“Proponents of the neurodiversity movement argue that disability has so far been conceptualized through a medical framework, which views autism as a set of (primarily behavioral and cognitive) deficits and impairments, which are viewed as the primary causes of disability. Many autistic individuals argue that this concept reinforces the idea that autism is something to be cured or prevented, which is profoundly dehumanizing.”

“Within this and other social models, the degree to which a person is disabled is not entirely due to autism per se but is, partly, a function of the way the environment supports (or fails to) people’s individual needs.”

“A recent study suggests that while there is heterogeneity and differences of opinion, most autistic people favor identity-first language (“autistic”) and referring to the condition as autism.”

I'd love to be able to wake up in the middle of the night and see without my glasses or contacts, and I don't find that dehumanizing at all. I'm sure every parent of a person with Down Syndrome wishes their child didn't have to have heart surgery in infancy, and could live completely independently until old age, and doesn't find the thought dehumanizing.

And as for the idea that the disabilities are more about inadequate societal support than about an actual inability to do something... I met a man with cerebral palsy many years ago. His mobility was severely affected, but he could use a letterboard to communicate, and he composed poetry. It was a laborious, time-consuming process for which he needed a trained communication partner. Saying in a medical context that he had a disability wasn't demeaning; it was just accurate. Arguing that every person in society should be trained to communicate with nonspeaking spellers, and therefore the lack of physical speech is not a disability... I can't buy it. I think you can believe that buildings should have ramp access without thinking that mobility impairments are not disabilities.

I have come to understand person-first wording as simply that: putting the person first. Deliberately reducing this because of a belief in "essentialism" seems wrongheaded.

But I am open to hearing the views of the other folks here.

Saw this AA Day clip from 10 years back with Donald Trump.
Nothing has changed.

Wow Kim you are so right. Right now we are choking on Trans propaganda. I don't even understand all these terms and I don't want to.
Our world is going to hell in a handbasket. This shit is just pure evil. It's time to get right with God. The end feels near.

Kim, I agree with you that the idea of turning the autism crisis into a cheap, dancing donkey to be celebrated is an outrageous insult and hurt to those who are really suffering from true autism and all the difficulties that go with it. I have an adult son who also likes to watch Sesame Street videos, Disney videos, and Thomas the Tank Engine just like he always has. We are parents of children who will never really grow into true adulthood and we must accept this and the heartbreak that goes with it. We must never die as we must always be here to take care of them for the rest of their lives and ours. What has happened to all these people? One in one thousand is now one in 48 cases and climbing. God help us.