Home Donate Contact Us Special Reports Science Email Subscription 2021 RSS Feed 2021 Our Mission
An Extra Weight to Bear - Escape and Autism
Do You Ever Really Rest? 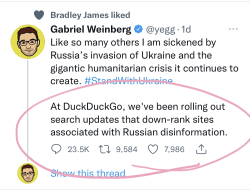 When Age of Autism launched in 2007, a source of great pride and revenue was that we were Google News Indexed.  Our headlines were scooped up and distributed to thousands of potential readers and supporters.  This was a good draw for our sponsors and advertisers. Then? Little by little, we were dropped from searches because we discussed vaccine injury. And now? It's nearly impossible to reach anyone except those who click into our site intentionally.  And we haven't a single sponsor or advertiser.  We DO have amazing, wonderful readers though! I had switched over to Duck Duck Go, and now also use a search engine called BRAVE.

This weekend, The Washington Post ran an article about search engines and platforms are under pressure to take explicit stands against Russia's invasion of Ukraine.  Messaging and information are always part of war, the good guys use it too. Deplatforming was rife during the height of the Covid pandemic. and now, we have a powder keg in Europe. Propaganda will always be with us, with every government, it has been part and parcel of media and government forever. When “we” do it, it’s education. When “they” do it, it’s propaganda. But now that the public has a platform, the rules are changing. What we saw during Covid, and continue to see, vis a vis vaccines, was Orwellian, to use the overused adjective. No other adjective fits as well.  We’ve seen the messaging change for autism too. Acceptance and awareness crept in and took over, treatment and cure were quashed. Here comes April.

###
From The Washington Post In Ukraine, tech platforms abandon the illusion of neutrality From Facebook to TikTok to DuckDuckGo, companies that once claimed to be 'unbiased’ are showing that they can take a side after all.

Search results should be unbiased. Social media platforms should be neutral. The Internet should be for everyone.

Though they’ve taken beatings over the years, these sorts of cyber-utopian ideals have proven surprisingly durable — in part because tech companies have insisted that they’re true. The Ukraine war, however, is putting them through a wringer.

From Facebook to TikTok to DuckDuckGo, tech companies are facing pressure to take explicit stands against Russia’s ongoing invasion of Ukraine. With some exceptions, tech has responded to the call, at the cost of its relationships with Russia.

But there’s another cost to doing what many see as the right thing in Ukraine. It requires the tech companies to acknowledge in a very public way that their products and policies aren’t neutral after all — and it reminds us all of their own unchecked power over the world’s information systems...

Age of Autism is a fab community resource service as well for people, and you don't find pearls in nature, the same size as bricks?, do ya !
If you need to think about taking on another job? to make ends meet? and pay the utility bills ?
The Smelly-Wellie-Tele-Graph is advertising /looking for a Potato Dresser . Wanted for immediate start ,knowledge of what colours go with brown an advantage .

Thermal updraughts do not always occur in a straight line . Crows know this.
Carrier pigeons, and your average observant sea eagles, know this fine as well!!!
Fact Checkers are Puddle Jumpers ? could not check their way out of a brown paper bag, or a sack of potatoes?

A fascinating show which looks into the possibility that Tesla used carrier pigeons to secretly communicate his scientific research from the New Yorker hotel. The pigeons are in the second half of the program.
"The Tesla Files: Shadow Government Revealed - Full Episode (S1, E5) | History"
https://www.youtube.com/watch?v=0_hFabF1Fjw

Wars are won on intelligence .AOA has supplied that intelligence edge still and over the years to fight and win many Autism wars..we fight on.007 is a fairy tale autism is the real deal.

Thanks Dan never forgotten Kim and all.

Guess who already thought of this. Could be adapted to transport data:
China is using robotic bird drones with cameras to monitor its citizens
https://bgr.com/science/china-bird-drones-surveillance-robots/
LOL!

What we need is PigeonPigeonGo!

It worked in the past....
"Following is a chronology of key moments in Reuters history:
1851 - German-born Paul Julius Reuter opened an office in the City of London which transmitted stock market quotations between London and Paris via the new Calais-Dover cable.
Reuter had previously used pigeons to fly stock prices between Aachen and Brussels, a service that operated for a year until a gap in the telegraph link was closed."
CHRONOLOGY: Reuters, from pigeons to multimedia merger
https://www.reuters.com/article/us-reuters-thomson-chronology-idUSL1849100620080219

"Shaheen continued, describing Campbell’s heroism during the war: “Roger and his unit overcame the hostile environment to become a key component of Allied success in the theater… Roger’s training with carrier pigeons allowed him and other OSS operatives to discretely send coded messages across hundreds of miles of jungle. OSS leadership praised the unit, calling it ‘its most effective combat tactical force in the war.’ Today, the Central Intelligence Agency, Navy SEALS, Army Special Forces and Air Force Special Operations Command trace their lineage to the OSS and operatives like Roger."
Shaheen Presents Former OSS Operative Roger Campbell with the Congressional Gold Medal in Recognition of His Service During World War II
https://www.shaheen.senate.gov/news/press/photo-release-shaheen-presents-former-oss-operative-roger-campbell-with-the-congressional-gold-medal-in-recognition-of-his-service-during-world-war-ii

But note that DuckDuckGo is downgrading not just Russian government propaganda sites, but any sites "associated" with Russian disinformation. What does "associated" mean? It could mean any site that agrees with the Russian government about anything, even if the Russians have no control over it. If you argue that we shouldn't deploy US ground troops in the Ukraine, or not enforce a no-fly zone, or not admit Ukraine to NATO, or say that we shouldn't risk a nuclear war over this, or oppose an oil embargo on Russia as counterproductive, or say that it's silly to ban Russian singers from the Metropolitan Opera, all of these are talking points for Russian propagandists. But are these voices of caution all agents of Moscow? Some of us have appeared on RT not because we had the slightest sympathy with Putin, but because it was the only major media outlet that would give us a platform. Are we then "associated with Russian propaganda"? Some on the Dark Side are already making that insinuation.

I am so glad that I continue to find AoA in my email inbox each day....
Just want you folks to know that....
KEEP UP THE GOOD WORK!
~Bill Bradford Hutchinson,
Keene, NH

Will Truth Social be a positive change for Age of Autism?