Home Donate Contact Us Special Reports Science Email Subscription 2021 RSS Feed 2021 Our Mission
Do You Ever Really Rest?
April Looms and Autism Does Too

President Biden Was Wrong: Two Industries Have a Liability Shield 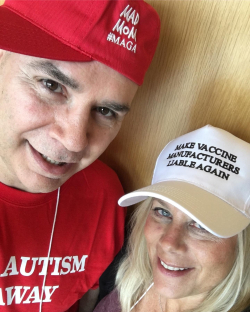 Donna with Tanner's Dad Tim Welsh at an Autism One Conference

Below is a copy of a letter Ms. Knepple sent to President Biden after his State of the Union address.  There are two industries that manufacture and sell products that are unavoidably unsafe, and  that are shielded from product liability. Guns and the vaccine divisions of pharmaceutical companies.  President Biden was wrong when he said only guns enjoy this shield.  Donna's letter should go to every Senator and Congressperson in the United States of America.

VIA CERTIFIED MAIL WITH RETURN RECEIPT

I watched the State of the Union address and was in utter shock and disbelief when you said, "Look, repeal the liability shield that makes gun manufacturers the only industry in America that can't be sued”. I would like to remind you that President Ronald Regan signed into law the National Childhood Vaccine Injury Act (NCVIA) of 1986 (42 U.S.C. §§ 300aa-1 to 300aa-34) giving pharmaceutical vaccine manufacturers and doctors who administer vaccines complete legal liability protection from all vaccine injuries including death. The NCVIA’s purpose was to eliminate the potential financial liability of vaccine manufacturers due to vaccine injury claims to ensure a stable market supply of vaccines, and to provide cost-effective arbitration for vaccine injury claims as a result that stemmed from all the vaccine injuries and deaths caused by the Swine Flu X53A and DPT vaccines in the 1970’s and 1980’s. Do you not recall voting on this bill when you were in the Senate? Henceforth, the reason why vaccine manufacturers gave Congress an ultimatum for complete indemnification or no more vaccines. Due to this industry’s liability shield since 1986 the following examples depict why it is imperative to hold vaccine manufacturers liable again:

In case you forgot, while you were Vice President the Obama Administration filed an amicus brief for Wyeth presented in Bruesewitz v. Wyeth, 562 U.S. 223 (2011). Did Wyeth’s Tri-Immunol DTP cause Hannah Bruesewitz’s disabilities? The United States Supreme Court case decision stated that vaccine manufacturers could not be sued for design defects in their products dismissing Hannah’s severe vaccine injury to their product.  Assume arguendo, was this premeditated to further shield Pharma vaccine manufacturers from liability and denying JUSTICE to the 5000+ Autism Omnibus Petitioners dismissed with callous disregard from the NVICP?  I can attest to the consequential frauds and damages, as an Autism Omnibus Petitioner v. Secretary of Health and Human Services, in the United States Court of Federal Claims, Office of Specials Masters, No. 02-1890V, filed for compensation on May 21, 2003, after 9 ½ years of waiting was dismissed on April 27, 2012.

The Obama Administration also granted whistleblower immunity to Dr. William Thompson, CDC Whistleblower, after he exposed all the CDC senior level vaccine and autism staffers who destroyed data which demonstrated a clear link between the MMR vaccine and autism.  Whatever happened to Dr. William Thompson’s investigation that was started by Congressman Bill Posey on the floor of the House of Representatives on July 29, 2015?

In addition to the above, the Emergency Use Authorization COVID Vaccine that you want “shot in arms around the world” has some very concerning and reminiscent issues coming to light:

Due to the above, there is an insurmountable number of people of all ages who continue to suffer from vaccine injuries and death “under the guise of public health,” and “for the greater good”.  People of all ages and differing socio-economic backgrounds are being fearfully coerced into getting a COVID “shot in the arm” or face the consequences!

We have been led to believe that our government system protects the rights of its people and keeps its citizens safe from harm.  We have been continuously brainwashed to believe that vaccines are “safe and effective” and “save lives”.  In all actuality, vaccines can CAUSE INJURY and DEATH as stated in the manufacturer’s package inserts.  How is it legal to mandate people by coercion into consenting to a “shot in the arm” with a EUA COVID vaccine when there are no package inserts listing ingredients and possible adverse reactions?  What happened to WHERE THERE IS RISK… THERE MUST BE CHOICE… AND INFORMED CONSENT?

As you said “you know how the American people feel.”  Then you must know President Biden, the heart-wrenching, emotional and financial distress people are suffering from on a daily basis due to their loved ones being left permanently disabled or dead from vaccines.

As President of the United States of America, you have the authority and obligation to uphold the Hippocratic oath of FIRST, DO NO HARM by REPEALING the LIABILITY SHIELD from VACCINE MANUFACTURERS and end this MANMADE TRAVESTY BESTOWED UPON THE PEOPLE SPANNING OVER DECADES by holding this industry LIABLE AGAIN!

“In God We Trust”

Thank you Donna, you are writing for so many who remain unheard.

Great letter. The hats and Shirts are available for any donation to Age of Autism. Just cover shipping. Very limited sizes and colors left. Just contact me. @TannersDad Timothy Welsh most platforms

Keep up the great work folks they cant say they didnt know.

WOW! Even without making some links in that letter, there's a TON of excellent information!
I'm going to spend an hour or 2 reading this later!
KEEP UP the GOOD WORK!

This is an article that has done a great job, reducing the information down to the bone and making it quick and easy.

It should not be wasted on Biden though, cause yes he does know all of this. He has an agenda, and it is not just his alone. An agenda that has made my blood run cold, made me have this feeling every once in a while of deep grief (it is for our nation) It has made me ashamed at the evil and corruption that my government is causing.

I think this would be a good article for it short hight lights to go up on the community board outside our local and very busy grocery store. I am sure I can find room to put it on there - between the free puppies, kittens and roosters give aways; and handwritten notes about what farm equipments that is either for sale or wanted.. .

The Truth will out.

We will all be held accountable one way or another on Judgement Day.
I pray these evil doers would repent beforehand.

Wow! Powerful, well written, and needs to be heeded.

Thank you, Donna Knepple, for stating the truth so succinctly and well.

Amazing letter! Unfortunately, it will be dismissed out of hand with the usual tropes, mainly because these people hate us; they recognize we are dangerous to their way of life to which they've grown accustomed.