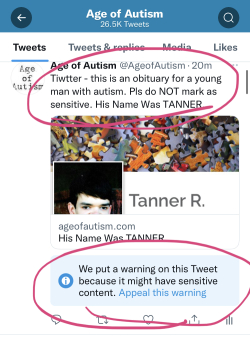 Last week, I Tweeted a photo of some cuts on the top of my hand. They looked pretty nasty, and I explained that my daughter with autism had scratched me during a bout of stress that she was facing. The Tweet had a purpose - to educate - not to shock, or be gory. Twitter labeled it as "sensitive," and I guess they started looking at us, because every Tweet with a link or photo is now marked as sensitive.  Yesterday, when I ran the sad news about Tanner Welsh's passing, I specifically asked Twitter to NOT censor us. I know, naive. At any rate, I'm disappointed, not surprised, that we're being artificially labeled. I can write sensitive information. I could make Twitter and many other social media and peoples' heads explode with sensitive content. I try to be very careful to keep Age of Autism live and not get shut down. Twitter has yet to remove our ban. 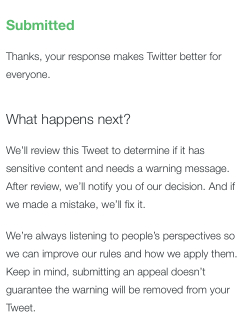 A grieving family for their beautiful son Tanner?
A sore scratched hand situation?
De-sensitised people will be offended and supersensitive to the wind blowing in the wrong direction?

Don't let it be a distraction ?

https//www.england nhs.uk>coronavirus>primary -care.
Coronavirus >> Primary Care guidance - NHS England
Extending the post-thaw expiry date of specific batches of Spikevax also known as Covid -19 vaccine
Moderna for adults . Published 2 February 2022
Batch numbers documented for a lucky bag /lucky dip post code lottery?
Is it the " best Before " date or the "Use By " date that is extended ?
Are other "Brands " doing likewise ?

They and Pharmakeia want our children all dead, violently autistic, mentally institutionalized, cancerous, or sterilized via vaccines. Does NCSA know this entire satanic system / psychiatry pipeline (vaccines-> violent autism -> CAFO public schools -> psych wards) will all collapse and God will not tolerate the evil autism epidemic much longer?

Do they realize the more you vaxx up and jab up people, the more aggressive and violent and demonically possessed they become? Just keep building and glorifying disgusting satanic psych wards and group homes and NEVER END THE EPIDEMIC?

The Illuminati owns the mental ‘health’ and vaccine industry: https://theilluminatiadvocate.wordpress.com/illuminati-and-mental-health/

What is happening to our children? Will ANYONE want to be a parent or teacher anymore?

Cant be showing what Pharma really does with vaccines now can we,it might just sour that new multi billion dollar yacht they were going to buy for the pharma kids.

I'm hoping for the overdue to happen to Twitter, Google (I know Google has a true government created and nurtured monopoly…what to do?), all the social media and wireless tech companies, and some other major fascists corporations who have always practiced censorship on the likes of us, but kept it mostly in the dark, until they felt brazen enough to announce "they were going to censor" after years of honing such methods and just about 4 years before the scam-demic (did they assume most would forget they are not able to get truth on the "misinformation" side by 2019 and were they wrong?). Now a lot more people are looking at shortened life expectancy with a lot of suffering from here to the end.

Nuremberg 2.0 is in order, for global financiers, including their intelligence agencies masquerading as “our” intelligence agencies, particularly all that voted for the great reset and the powers they represent, media, spy tech, corporate CEOs that have signed on, particularly hospital CEOs, "public health" officials, doctors "following CDC protocols," many government officials from U.S. pres. even down to school board members!

Not this! This looks like a sacrificial wolf (and TPTB attack him mostly for not censoring enough) thrown at the masses for a theatrical event:

as he is starting a more comprehensive data gathering "enterprise" META. And we're supposed to be satisfied with his woes as he reinvents his CIA fostered spy franchise?

And why do the likes of Musk get to force all of us into an unprecedented experimental irradiation of the planet’s atmosphere and us in stupid S.M.A.R.T. cities, and Jeff Bezos, after using cheap labor and special government shipping rates, and years of no profit for whomever was willing to fund Amazon to drive most of the middle and lower class market place down and out or into his hands for near comprehensive data mining on purchasing habits (with some help from a virus sending more online) for “the cloud” announces that in a few decades all human beings (he didn’t say how many there would be left at this point) would be off planet working/living in space while Earth would be a special preserve rare vacation resort (or would that be rare mineral mining venture?). The people he hobnobs with…is he speaking for them with no one even blinking?

If we can’t do N. 2.0, we can at least not go along as much as possible, keep funds and our data out of there hands, but possibly we need more than that, or more of these crimes, and maybe worse, will come.

Sensitive - as in graphic?
As in laying a baby in the stretched out, hot, metal hands of a bull statue that they claim is a God called Bal. Beat the drums loud as the baby slowly burns, so the father's heart will not be soften at the wailing of his child's cries.

That is what kind of people dwells among regular people - always. Scary we regular folks forgot and thought the health care was above all of that. They now hide it well.

Now they burn them babies up from the inside with vaccines and the drums have become: censor as they label things sensitive, or misinformation. All so hearts will not be softened, and no one has any idea of the screams and the pain; except the heartless, evil, pharma priests.

Comirnaty for adults is now joined by Spikevax for teenagers - both are just a trick to shield big pharma from lawsuits. A rose by any other name is still a rose - except in this circumvent of the law.
Same vaccine, under another name and no one can sue for injuries, and onward toward the march of get to whom they really want to lay in the hot hands of Bal- the six months to 5 years olds.

Moderna as already ask FDA - and FDA will not refuse them, because they all are the same = worshipers of Bal. .

I think the media’s come to Jesus moment is close at hand.

To those trying to erase reality, reality is "sensitive".