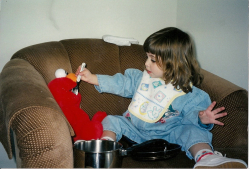 Parents in the autism community have long been wary of anything that comes out of the Centers for Disease Control and Prevention. For over 20 years this agency has failed to show the least interest in the explosion of neurological/developmental problems plaguing our children.

Every year or two the CDC updates the autism rate affecting a mind-numbing percentage of kids, currently around 2 percent, with no alarm or explanation for why it’s always going up. In fact, officials routinely remind us that they have no evidence that there’s ever been a real increase   in the number of children with autism. They conveniently remind us that it’s probably just more better diagnosing and greater awareness. All the powers that be buy into that claim.

Now there’s a new pronouncement from this agency and it begs the question: What are they covering up now?

With little media coverage the CDC, along with the American Academy of Pediatrics, recently moved the goalposts on childhood developmental milestones. Among these changes are things like crawling, walking and talking. Crawling is no longer a milestone, walking has been moved from 12 months to 18 months and talking from 12 months to 15 months.

The CDC defended this new timetable by saying it will improve diagnosing development delays like autism.

In an effort to spot autism and other developmental disorders more quickly, the CDC has changed the major milestones up a little bit. …

The AAP’s Peter Lipkin assured us, The earlier a child is identified with a developmental delay the better, as treatment as well as learning interventions can begin.

How is waiting till a child is 15 months to be concerned about a lack of language skills going to help doctors identify autism earlier?

This explanation doesn’t make sense to any thinking person and many suspect that the milestones have been extended or eliminated because so many kids simply can’t make them today. A normally developing, healthy child is becoming more and more a rarity.

One professional group isn’t buying the claims of the CDC/APP.

WSBT anchor: Questions tonight after updated guidance has been issued for young children. The American Academy of Pediatrics and the CDC have updated milestones for kids who are learning to walk and talk.

It is the first update in almost 20 years.

The goal is to identify developmental delays early.

Reporter:  It's part of the CDC's "Learn the Signs. Act Early." campaign.

But a checklist that's supposed to make it easier to screen kids for delays, is raising questions from a local expert.

The first major changes in almost a decade added checklists for kids ages 15 and 30 months. They now advise 75-percent of all kids should meet these milestones instead of 50 percent.

According to the new guidance, some milestones changed as well. Now, talking should happen at 15 months instead of 12 months, based on the last update.

Babies taking steps on their own has moved to 15 months from 12 months. Crawling was previously considered a milestone at 9 months but now it is not mentioned.

"The SLP world was up in arms the other day when these recommendations were released,” said Danielle Newcombe, Speech-Language Pathologist.

Newcombe says these new guidelines raise a lot of questions.

Since the guidance was updated, Newcombe says she hasn't found any major research to back up these changes.

She's concerned that moving some of the milestones later could make early identification of problems harder.

"That age of acquisition shifting later might result in it being more difficult for us to identify these kids earlier and get them the services that they need earlier,” said Newcombe.

Newcombe stresses that you know better than anyone else if your child is behind, and says that early intervention is key.

"Have dialogue with your pediatrician so that you can, if there are concerns and there is something that warrants services, we can get that child in sooner rather than later so trust your gut,” said Newcombe.

The American Speech Language Hearing Association released a statement today expressing concern to the CDC. It says it'll be conducting a review to make sure these milestones are evidence based.

I’m not sure what ASLHA will find since little the CDC does is actually “evidence based.”

How many kids have food allergies? “Mental Illnesses” (demonic possession induced by vaccines)? Gastrointestinal problems? Extreme violent behaviors (not just autistic kids, increasingly all kids)? Inpatient involuntary psych ward “care” to be physically assaulted, abused, and drugged up by Pharmakeia? Schools are already turning into psych wards. Soon they might build mental hospitals and epipen buses/insulin needle buses next to every school.

It’s not just autism, soon there’ll be no healthy, non-violent, non-chronically-ill kids left. When the real world becomes too gruesome and miserable to “live” in, invasive, transhumanist VR/AI projects like Moonshot and Cryptocurrencies will “magically fix everything”!

And they blame everything on “bad choices made by the kids” as if they’re able to control themselves at all, being biometal aluminum-5G puppets, or/and “bad parenting”. If there is a genuine increase in child abuse, is it because parents are increasingly violent/physically abusive and short-tempered towards kids with extreme behavior/medical problems? Due to the massive anger, expense, and stress?

Jeannette,
What a great idea! Maybe Paul Thomas or someone who has access to parents able to give that information could collate that sort of information when they do studies on medical condition correlations with vaccines. It would be something parents would be interested in seeing and it would be a great comparison with children who have received the Vit K shot and vaccines etc. It would only take a few more questions about milestones on a questionnaire for parents to fill out or a few more questions for a doctor to ask the parents. Maybe more than a few but still not too onerous once you have a parent in front of you or a questionnaire to be filled out.

Damage control for the masking part of the scam-demic and autism is mainly just the excuse for this.

We need some average milestone data for guidelines for the never vaxxed, no vit. K shot, no circumcision, etc.