Dear Autism Society of America, Is this Slightly More Autism?

I would like the muckety mucks at The Autism Society of America to listen to this blacked out video of one of my daughters - who is in her 20s - keening, weeping and lamenting because a Nick Jr program was left off the Pluto TV sc 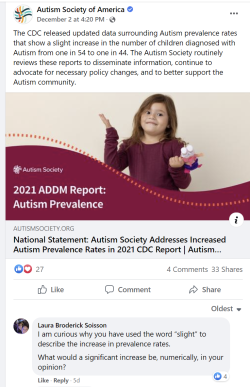 hedule for a day. The actual screaming and sadness went on for a full day. I'm her mother and I had a hard time managing the screaming and inconsolable emotion. Now, imagine I'm a barely trained group home worker making $16 an hour on the last hour of an eight hour shift.  She would be in danger. Is this the slight increase kind of autism than ASA wants us to recognize?

Autism Speaks is running feel good donation ads on major media. They want your money and ask you to develop awareness and acceptance. The money rolls in, but neither awareness or acceptance does anything concrete for people with autism - whether severely affected or not. Last week, we wrote about The Autism Society of America having downplayed the 22% increase in autism as a "slight increase."  Jump in Autism Prevalence A Mere Blip to Autism Society of America Is that common core math?  I've yet to see any version of autism that is “easy”.  This doesn't mean a person on the spectrum, or autist, if they prefer that term, can't have a rich, satisfying life.  Of course they can. But I think we need to acknowledge the tough parts too.  LOUD and clear.

Not sure this went through:

Sign up for Smile dot Amazon dot com.
Choose autism age (simple button below)
Use the smile URL to do all your holiday shopping. Then a portion of your shopping will go to autism age and help actual autistic people and it won’t cost you a penny.

Autism age is also in benevity and other corp gift programs

Everyone as you do your Amazon Christmas shopping choose autism age as your smile.amazon charity. It doesn’t cost you a dime but sends a percentage .

Oh Kim that is heartbreaking.
When will it end? When will they learn? The cruelty of allowing this to continue, of running “charities” that exploit those who care about this but don’t help those suffering . . .

If this "slight increase" has continued every year since... (pick a mathmatical formula--we've had manipulated counts and undercounting every report IMO, broadly expanding wireless exposure in these years, so who knows) ... 7500 more each year (if growth is exponential this is maybe a significant undercount) would mean 165,000 children born in 2020 will succumb to autism.

After that year significant numbers of 5-G satellites, 5-G devices went online in the "smart" cities, a plandemic (that maybe protected some infants from some of their shots, but were they since recklessly "caught up?"), an mRNA modification and likely human tracking injection that sheds one or more components and rips up the vascular system and invokes new forms of autoimmunty... and who knows when this stuff turns off in anyone impacted ...who can guess what "the spectrum" will extend to or look like?

Already at this point the miscarriage rate and youth mortality is likely "slightly" epidemic and rising, too! Probably we won't even be able to pretend the increase in death in seniors is "slight." That's the new "normal" this apathy is now facilitating IMO.

i don't understand why these organizations aren't building housing and training future generations on how to handle autistic adults.

Kim-I have experienced the same thing happening with my adult son who also has autism. The screaming and head banging can be very hard to tolerate and it takes us a while to calm him down. Imagine if, as you say, they were in a group home with a tired staff person who would easily lose their patience and our children would be in grave danger of being abused. We are keeping him home with us for this safety concern for him and our need to protect him. We all are enduring the day to day struggles with the extreme hardships of autism. I pray to God we can survive it all.

It has happened to many organizations .. they begin with a JUST CAUSE TO ORGANIZE … soon they begin to make enormous amounts of money because the JUST CAUSE deserves fumding .. soon careers are involved ..and finding the CURE for the JUST CAUSE is no longer the priority because if the CURE is indeed found .. the ORGANIZATION NO LONGER IS NEEDED.