Note: Dan wrote this post in 2008. Most of know that vaccines have been protected for decades. Many more are finding out today. We're going to run Dan's posts more frequently - his work deserves fresh notice.

Now that my Age of Autism colleague J.B. Handley has demonstrated the role of Wyeth in funding Every Child By Two (HERE) -- the vaccine initiative that Rosalynn Carter, Paul Offit and Amanda Peet boosted a week ago -- I think it's time to share a piece of paper someone slipped me a while back. It looks innocuous enough -- an inter-office memorandum from 1979 (Click HERE for the pdf)* about distribution of Wyeth's DPT vaccine. But read closely -- a series of SIDS deaths in Tennessee is prompting Wyeth officials to make sure that vials from a single lot don't get distributed to a single state, county or health department.

The memo says "senior management staff" gave the OK to proceed with the plan.

I am going to refrain from interpreting this document -- although, if there is an interpretation besides the obvious one that Wyeth didn't want correlations being drawn between DPT vaccine lot numbers and SIDS deaths, I can't think of it right now. And sure, it can be argued this is ancient history -- the vaccine has been changed, what happened in 1979 does not necessarily reflect what's happening today in the debate over adverse events following vaccination, and so on. 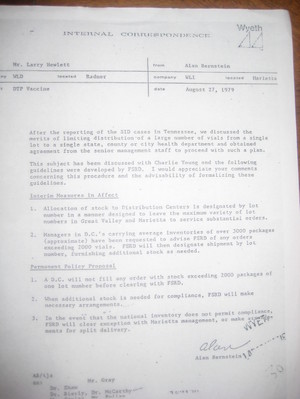 Click on the photo to bring up a full-sized pop up window. You can change the percent view in the lower right hand corner to see the entire doc. The PDF file has the full doc, fully legible as well.

...except there is an analogy here that goes way beyond the memo. Barbara Loe Fisher and Harris Coulter lay it all out in "A Shot in the Dark," subtitled "Why the P in the DPT vaccination may be hazardous to your child's health." Barbara is regularly portrayed in the media as an anti-vaccine zealot, but the book's discussion of what happened in Tennessee is pretty convincing. (And she was instrumental in getting a safer version of the vaccine onto the market.) From the book:

"When statistics are applied to the study of vaccines, political immunology demonstrates its infinite flexibility: statistical evidence demonstrating cause and effect is denied, when this same evidence, applied to any other branch of medicine, would be accepted without question," Coulter and Fisher write.

"This convenient method of reasoning was displayed with particular clarity in connection with the government's investigation of SIDS deaths in Tennessee. In 1978-79, eleven babies were found to have died within eight days of a DPT vaccination. Nine of the eleven had been vaccinated with the same lot of pertussis vaccine, Wyeth #64201 and five (four from the same lot) had died within twenty-four hours of vaccination.

"A statistical analysis of the clustering of deaths revealed that the likelihood of observing four or more deaths occurring randomly on any of the first eight days after the use of lot #64201 was 3 in 100. ... E.B. Mortimer later reported that the probability of this being a chance association was even lower -- between 2 and 5 in 1,000.

"The statistical evidence in favor of a connection between the deaths and the DPT shot was strong. Would the medical authorities bite the bullet and admit the vaccine was related to the deaths? Absolutely not."

It's a long and unpleasant tale, but when all was said and done, "the tombstone was placed on what happened in Tennessee three years later, in the September 1982 issue of the Journal of Pediatrics, when Bernier and his colleagues at the CDC wrote their epitaph on the infant deaths. ... They ... made this amazing statement: 'Whether or not this temporal association reflects a causal relationship remains undetermined; we found no evidence to support such a causal association.'"

Fisher and Coulter mention the Wyeth memo, saying the company "apparently also decided to act to prevent a clustering of deaths following DPT vaccination from a single lot from ever occurring again in a single geographical area." They don't reproduce the actual memo; as far as I know, this is the first time it has been published. (And no, neither Fisher nor Coulter was my source.)

It packs quite a wallop, doesn't it? Since these are described as "Interim Measures In Affect" (sic!), and include a "Permanent Policy Proposal" to put into effect (sick!), wouldn't it be interesting to know how they distribute lots these days? Is this the kind of approach that Rosalynn Carter and Amanda Peet (I'll leave Paul Offit out of this) want to be hooked up with? Might they consider asking their benefactors for an explanation, since as far as I know none has been forthcoming although the memo's existence has been known for a couple of decades, at the least? Do the drug companies, the HMOs, the AAP and the CDC really have a track record of tracking down every report of side effects, encouraging the public to make use of the VAERS system and vigilantly monitoring the VSD database? Are they the ones we want to trust to tell us whether there is any "causal association" between vaccines and SIDS, or autism, or asthma, or ADD?

I vote no. I also can't help pointing out that A Shot in the Dark was first published in 1985, just before the modern Age of Autism began. Too bad no one in a position to do anything about it took seriously the deep and disturbing implications of this incident -- and the continuing power of "political epidemiology" to bury its mistakes in unmarked graves.
--
Dan Olmsted is Editor of Age of Autism.

* Thanks to Ginger Taylor of Adventures In Autism for help in turning a 29 year old piece of paper into files.

Bob, you nailed it.

If he can't make you take the Covid jab, he'll take away the monoclonal antibody treatment.

"just before the modern Age of Autism began."
For me Dan says it all there, and where we are now i darent think Dan would word it for sure.

This appears to be the guy that sent the memo:

He uses VAERS data to show that only a few lot numbers are highly toxic. There is a deliberate distribution pattern.
Someone who is good at data analysis should see this.

I'm voting with Dan on this one.
Just can't rely upon the CDC, AAP, drug companies, or HMOs to determine whether the DPT shot causes SIDS. The memo was written in 1979, a friend of mine lost a child to sids in 2005, it was a devastating blow to their lives and the entire community from which they never really recovered. The MD response was stupid even for 2005... no one knows exactly what causes crib death, it may be related to second-hand smoke and having the child sleep on their stomach. The liars' club has been perfecting their craft for some time it appears. Correct me if I wrong, but didn't Merck absorb Wyeth at some point their sordid history ? The companies appear to have a strong cultural fit.

I remember reading Offitt's book .. wherein he discussed the infamous CUTTER INCIDENT where a "hot lot" of vaccines caused numerous deaths of children .. Offitt had the audacity to claim the ONE THING he learned from the CUTTER INCIDENT was to widely distribute vaccine lots so as to diminish the likelihood of having another HOT LOT uncovered.

n 1974, the year my daughter was born) she had an adverse reaction to her first DPT vaccine.(s fever so high I thought she was going to die). She recovered, but I never allowed her to have another DPT shot. Doctors questioned it, but nobody forced me to give it to her. The year before that, my good friend from work in NYC had a boy that began seizing within hours after his DPT vaccine. Today he is 6'2," in his 40's with full blown autism, non-verbal and still has seizures. If only I had applied that lesson to my grandchildren. If only........
Maurine