A Holiday Message From a Shaolin Monk 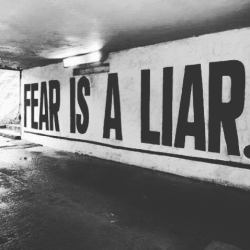 Today's post is a bit out of the ordinary. It's not about autism or Covid or the things. It's a message of direction and confidence from a Shaolin Monk.  Put on your headphones, put in your ear buds, listen on whatever device you have while you go about your Saturday chores. My interpretation after watching for the first time was to remember a phrase that has been so helpful to me over the years: Fear is a liar, vibrate higher.   We could all use a boost right now - away from fear, toward confidence and peace.

Freedom he says is the ability to defend and protect yourself. With that skill you will control fear and with that comes freedom. Very deep and profound!

To learn to protect yourself, you must learn from many others. Older people that have been around longer, and thus know more should be respected for they teach us a lot of these skills.

The Defense arts of learning movements of defense and attack, are taught until it is not just in the brain, but in the very muscles till movements can be performed with out thought! This , is pretty neat!

Such things have been taught in all societies for centuries. I have seen 12th century drawings of of certain sword movements from Europe in museums, but the Eastern societies do it with hands, since a weapon is not always at hand. That is pretty smart.

Tae Kwon Do
Both my children has some training in Tae Kwon Do Do . It does help.

My son at the time was having myoclonic jerks. It seemed to bring on a lot of them as he went through his movements..

That said; We have been off the seizure med for a year now, and so far so good. Except he gets this unreasonable fear in his chest some times. .He is scared it is a seizure. He is scared to get a job, to move beyond his comfort zone. He had such a spell just yesterday morning.

Soooooo, Fear, is more than not being able to protect yourself it looks like to me? What is fear anyway? I mean there is fear - natural fear and I am beginning to think there is fear tied to the immune system? To inflammation?

My son's seizure med; written in the insert says that , they are unsure how it works-
But if you look at the side effects - like more prone to sinus infection- maybe it has to do with a dampened down immune system; the controlling of inflammation?

I am now considering Prozac for my son; guys?
I noticed that Front line doctors and studies around the world were looking at all the old drugs that help with covid -- reducing inflammation, keeping you out of the hospital -- they found that Prozac works.

So that means to me that Prozac has effect on the immune system.

I looked up the history of Prozac, where it came from - it came from Bendryl They noticed that Bendryl helped in anxiety and depression; broke it all apart and looked at each molecule and discovered Prozac.

Well where did Bendryl come from? I don't know rom anine - some amino acids, used in Rocket fuel?

But you can bet that they know more than what they having been saying for years about a lot of things that land on inflammation.

Marica Hinds has her son on Proazc. Maybe it is time I did too.

Speaking of which; Praying with my son - calms him down right away. .

Evidence in my own life, that makes people say they Don't care for Abrahamson, and make fun, eye rolls if we are willing to put ourselves out there and try to share our experiences - so I won't anymore, well (maybe I will) , but there is something greater than ourselves.

That said Marcia Hinds did say that God gave us Prozac and maybe we should use it?

Which makes me think about one of the Batman movies when they made something that induced fear in some kind of gas. You all remember that?

There is fear and then there is another kind of fear.

I got some thinking to do about what the antidote is for fear gas.

These SQUIRRELS overcome their fears and win the big prize!