The Transformation is Complete 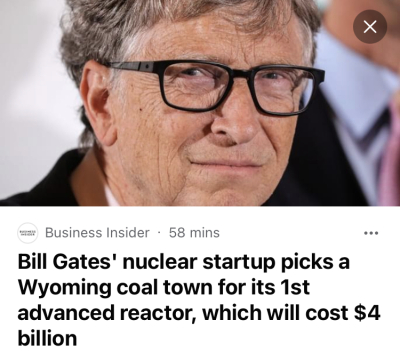 How DARE he?? Nuclear power?

From Business Insider: TerraPower, Bill Gates' nuclear-power venture, has picked the western Wyoming coal town of Kemmerer as the preferred location of its first advanced nuclear power plant. "TerraPower" =  EarthPower. Control the energy, control the world.  I guess Mr. Burns kept him out of Springfield. 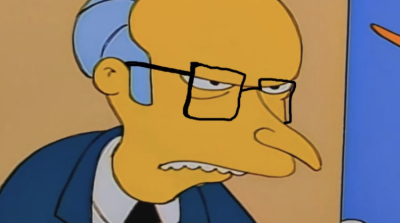 The Biden administration said it was seeking local communities willing to host nuclear waste storage sites, arguing they are needed to deal with the nation's existing waste and encourage growth in virtually emissions-free nuclear power to fight climate change.

The U.S. government tried for decades to create a large-scale nuclear waste dump in Yucca Mountain n Nevada to store waste accumulating at reactor sites, but the project was ultimately rejected due to public concerns about safety.

Nuclear energy is essential to achieving the Administration's goals to created a carbon pollution free power sector by 2035 and net zero emissions economy by 2050, the Department of Energy said in a press release announcing the effort

The DOE said it was issuing a "request for information on a consent based siting process" that would be used to identify sites.

So that is the entire article.
I think I am getting a clearer picture here.
Bill Gates likes to monopolize, so get rid of fossil fuels and he has it made.
Biden wants volunteers - gentle at first - like the mandates for vaccines - and his patience runs thin.
Wyoming is going to eat this stuff; cause Cheney has sold out the people of Wyoming.

We are going to start hearing a lot about thorium.
It is going to be the "safe" nuclear power.

I am going to compare here. The old DPT vaccine was dangerous, but that new DTaP vaccine that one is safe.
Both cause massive inflammation.

Thorium - can't make nuclear weapons. ???? According to chemistry it sure can. It turns into Uranium 232 , maybe not as fast and then does not stick around long before it turns into Uranium 233, but it can be made into weapons just the same.
.
China is starting up thorium nuclear power plants.
Oak Ridge ran one for four years or so - back in the 60s.

It is all about calming down the population and getting them to accept clean - carbon dioxide free energy.

So is this what the lies about carbon dioxide and that scare has been building up to all along?
Well I thought so at the very beginning of this - 20 years ago?

I was not sure though, cause there are always other people that confused me, like Al Gore and David Blood's bid to have a company that was going to exchange carbon trading points between big companies. I thought that might be it instead.

It is kind of like having a covid vaccine licensed by the FDA, but it is not available, but the exact same vaccine in available under a different name.

It takes a while to try to figure out why they did that. We are trying to play catch up.
Do we have to play catch up with a very evil person like Gates - when is enough, enough.

Southernprepper1 filmed what appears to be chemical warfare in the skies. I often shrugged off “chemtrails” as a paranoid conspiracy theory many times, but with massive hyperinflation, vaccines, exploding SPED costs, and starvation, the possibility of a worldwide depopulation movement seems scarily true.

I also can’t forget HAARP weather manipulation and the creation of “natural” disasters by the U.S. government.

Are chemtrails (and vaccines) funded by Bill Gates?

Native American societies weren’t spending their childhoods (nor adulthoods) in scream rooms and sensory rooms, getting shot up with neurotoxic aluminum or unknown foreign DNA, or being injected with even more poisons in mental asylums for uncontrollable and involuntary autism outbursts and rages.

This will anger pro-U.S. propagandists and the brainwashed masses, but I fully support creating separate Native American countries to replace U.S. states. Just not the vaccine-doused, hyperinflation plagued, feces and needle filled, communist nightmare, rampantly violent “utopias” liberals want. And no wars nor violence based on ethnicity or such.

The USA is rapidly dying out and America will never be the same. If liberals truly “cared” about NA rights and revival, the U.S. government would no longer be extinguishing NA’s via vaccines, poverty, junk food and food deserts, obesity, anti-indigenous police interactions (being arrested for foraging nutritious foods), horrific boarding schools and forced colonist assimilation, and Manifest Destiny should’ve never happened.

The USA has devolved into a horrid nightmare of a nation, starting with the torture and erasure of native tribes, and ending with Venezuela-style hyperinflation, rampant neurodegenerative illnesses and chronic diseases alz including obesity, extreme decadence, uncontrolled and far right capitalism, nationalism, vanity, etc.

Vaccine Capitalism is communist. Since YouTube wiped out or age restricted vaccine truth videos, where is a video website all about vaccine consequences and aluminum. Why ARE so many illegal aliens flooding America, is it because of our chronically sick and autistic population?

How will the public be made TRULY aware of the ugly sides of autism, since the Neurodiversity movement’s fragile feelings get hurt over meltdown videos and vaccine truth documentaries?

I used pure bentonite clay baths and charcoal soap (on a constant basis) to help overcome some of my worst handicaps’s parts. Get this healing clay before the evil U.S. bans it.

Evidently, taxpayers get to borrow money to fund the research/RISK and Bill Gates & and Co. get to keep the profits. SOUND FAMILIAR? What's in it for the Mayor?

What else is in Wyoming?

"One of the U.S. Military’s most enigmatic military bases is open for business again because of the COVID-19 pandemic. Cheyenne Mountain, an underground facility carved into granite rock, was designed to deal with a nuclear attack on the U.S. and Canada. Its first real crisis, however, is the ongoing global pandemic. The base is up and running as a backup to the primary NORAD base, and its personnel is living in isolation to prevent them from picking up the virus."
https://www.popularmechanics.com/military/a32380097/norad-cheyenne-mountain-fortress/

I hope he does run Annie .I rember when Trump won there was 15% of the votes they reckoned came from health and vaccine issue voters good start for anyone mind you the voting machines need to be un-fixed for a fair election.

The transformation is totally fragile and forensically fractured!, Just look at the state of the political forensic flunkies
Cop 26 just finished in Glasgow What a total disconected political pantomime !
The World Leaders had their dinner in the Glasgow Art Gallaries
No masks apparent or social distancing required ? Vax passports not required don't ask don't tell for them ?" High Tea With Auntie Morag's Produce ! Best in the West" Organics .,for dinner!"

It made me laugh so much with the huge Salvidor Dali painting looking over them all , I hope it did not give them a double dose of something or other in the region of a double dose of indigestion ? before the best of fancy food was served up for them all !
Runrig Paul Mounsey An Toll Dubh YouTube

I know of someone who can stop him.

the resemblance in those photos is uncanny.

the slow kill clot shot vaccines arent quick enough hes going for nuclear...now at what point does someone stop this madman?
That hand shake with the queen a few weeks back seems to have done the trick..

'No One Can Slow The Passage Of Time,' Says The Queen
Her Majesty wrote the poignant message to the Church of England's leaders

Liz Cheney is at Congress woman from Wyoming - Hmmmm.
Bought by Gates?

Yeah, I thought so -- Gates is into Thorium.
"
While not technically a molten salt reactor, another more recent example of a Thorium reactor is currently under development by a company called TerraPower. Founded by Bill Gates, TerraPower is developing a sodium-cooled fast reactor called Natrium,[91] which plans to build a pilot plant in Wyoming and enjoys the financial backing of Bill Gates and Warren Buffett.[55] The Natrium power plant could also act as a repository for excess energy from renewables by dumping the energy into a heat tank.

Now wait for some one to comment that it is that new thorium instead of uranium. Much more abundant so they so.

It will be expensive though. Oh, but less waste (so they say)

No China syndrome is possible, and it 's radiation only last a couple of hundred years instead of thousands. What is a life time?

Not electrons -- pieces of the busted atom - even smaller than electrons.
I will take coal dust stored in a pond, with high chimneys containing million dollar scrubbers anytime over buried radiative rods every where, running out of room, waiting for the day that the water cooling system breaks down and then the China Syndrome, and little kids with lots of nose bleeds, born with a hole in their hearts. .

This is right out of all the "Men that Built America" playbook.
Get rid of all the competition.
Make sure you have the government helping you do it.

As in Climate change - the war on coal, told the gullible public that coal is an old fashion idea - past it time . Meanwhile West Virginia and Eastern Kentucky found themselves in a depression equal to the Great Depression as the rest of the country remained oblivious.

Biden looking over electric cars - like I could afford one, and if I did - what is that electric bill that depends on coal or other fossil fuels.

We will be forced to turn to nuclear.
Nuclear: Requires graphite rods to be inserted into the radiation to absorb the extra electrons and keep the reaction from going - bad.

They have to change these rods out; a lot. Like every month. And it is tons of radiative material that has to be buried. Nuclear power plants all have these burial grounds and it don't take long for them to run out of room.

I wonder if Bill Gates cares about the severely and violently autistic, doomed to being restrained, injected and tortured inside psych wards, kicked out of group homes and highly expensive therapies, raging and attacking people and destroying property at schools and homes, etc.

Are extreme, painful sensory issues “sensodiversity?” What about autistics who are learning impaired and can’t go to college or even high school? Does he give a hoot?

Anything Bill Gates is even thinking about controling is positively frightening to me ..