Fauci Is Pure As the Newfangled Snow 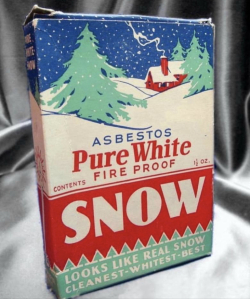 Anthony Fauci. Pause. Hand over heart. Genuflect. For unto us, I REPRESENT SCIENCE as he said on CBS Face The Nation was born on 12/24/40 in  New York, NY.

Speaking of science, did you know that in 1940, “Science” told Americans that they could protect their homes from fire during the holidays by decorating with pure asbestos? Pure cancer causing asbestos was used as artificial snow. Safe! Sparkly! Protect the ones you love. Trust us! Trust SCIENCE! Fauci was born just one year after The Wizard of Oz debuted. Strange coincidence that the WE REPRESENT THE LOLLIPOP GUILD little people appear to have  Bell's Palsy - just look at their wee mouths droop. 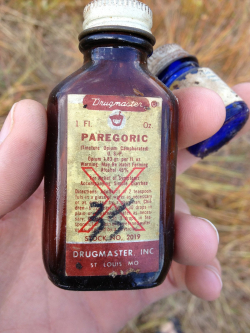 Source Wikipedia Old bottle of Paregoric, circa 1940s. The large red X on the label indicates that it was classified as an "exempt narcotic", sold without prescription even though it contains morphine.

Even sciencier?? When baby I REPRESENT SCIENCE cried, Mother Science likely gave him the safe, pediatrician recommended product called Paragoric.  My Dad used to joke about Paragoric when my kids were young. It was a tincture of OPIUM sold over the counter as an "exempt narcotic." Sleepin' Susie! Yes, Mother Science used over the counter morphine help baby sleep safe and without a sound. Drugged. Today, we have an opioid epidemic.

How DARE we question I REPRESENT SCIENCE?  What will Science say in 80 years about today's science?

Their segregationist tactics can't keep us off of the LOVE TRAIN :-)

This is also an attack on South Florida. All the unvaxxed snowbirds can't get to their winter homes!
This is the INVISIBLE IRON CURTAIN. They want us locked down so when they crash the economy we will be their debt slaves. No offshore tax haven for us.

Not sure where to post this terrible news, but here will do:

In the land of the fee, home of the slave once again…

Over 29 TRILLION in debt.

My God in Heaven Emma!
Fauci is on right now, and they all need to have been stopped back last November. WE are running out of time with these eugenic,
Marxism, mass murders, and we gave them the money to do it.

Well there have been low level rumblings about small pox.
If these guys are stopped - like tomorrow - and that seems unlikely.

Trump if he was playing some like of three D chess game here - has lost when he did not fire Fauci.
Sure seems to my simple tick tack tow gamer mind here - that JFK Jr should have got his commission and then - but that did not happen.

Hump, I had small pox.
I was vaccinated in the first grade.
I Watched them all vaccinate for small pox in the third grade on the balcony of the gym and came down with small pox two weeks later.

It was not an easy disease. I remember being very sick, and then waking up in the hospital under quarantine.

And I was vaccinated so it was a milder disease then.
My kids are not vaccinated, and even for small pox - that is not happening.

Joanna,
LOL. I bet you were calm and peaceful!

Joanna one of our friends had the same comment challenging us about the safety of the MMR .."theres nothing wrong with the MMR its made (childs name ) a lot quieter and doesnt rabble on anymore"

Yup! apart from trying to stop my eyes noticibly opening wider -what do you say!

My mom used to give us paregoric. It tasted awful so she put a spoonful of sugar in that little plastic cup that came with it and we would sit in front of the TV and lick the paregoric soaked sugar. She said we were always calm and peaceful after…

One is also reminded of Pink disease (infantile acrodynia) from mercury in teething powders and other medicines.
A 1949 article in the BMJ mentions that mercury was considered a possibility by Zahorsky in 1922 but ends with: “The aetiology is still unknown and the possibility is discussed that this may be a primary emotional disorder.”

Of course the truth is, Fauci DOES represent science, doesn’t he? He’s more correct than he realizes. And that says it all about the current state of $cience …

Here's some SCIENCE Mr. Science isn't going to like......

"We conclude that the mRNA vacs dramatically increase inflammation on the endothelium and T cell infiltration of cardiac muscle and may account for the observations of increased thrombosis, cardiomyopathy, and other vascular events following vaccination."
https://www.ahajournals.org/doi/10.1161/circ.144.suppl_1.10712

Wonder who's policies have killed more people - Fauci's or Biden's? Two peas in a pod called the "liars' den."

Science is inquiry which leads to discovery. If your claim is that you are science, and therefore you are not to be questioned, you’ve disputed you’re own claim.

THALIDOMIDE, VIOXX, OPIOIDS, TALCUM POWDER, TOBACCO BRANDS WHEN RECOMENDED BY DOCTORS, WHOLE HOST OF FORMER "INFANT" MEDICATIONS NO LONGER AVAILABLE .. THERE ARE A MILLION REASONS NOT TO 'TRUST THE SCIENCE" .. TODAY THE BIGGEST REASON NOT TO TRUST THE SCIENCE .. IS FAUCI HIMSELF.

Don't forget mercurichrome/merthiolate - great idea to put mercury on an open would, eh?