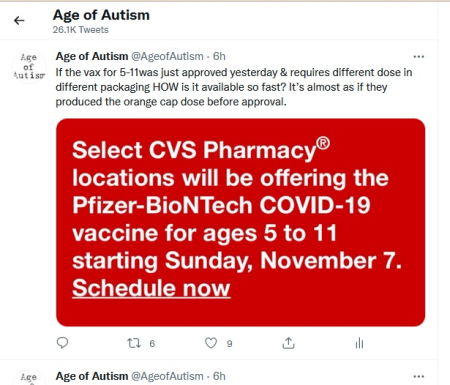 Aaah, CVS, whose 2021 purpose statement is "the heart of health," is about to embark on a national clinical trial on American children. How did they get stocked across the nation just 5 days after approval? I Tweeted them yesterday. That said…

We are not a monolithic group at AofA. and if you feel it's the safest choice for your child to be vaccinated, we respect your decision as a parent. Your right to choose.  In addition, we hope you never experience the heartache of vaccine injury,  that so many AofA reader know is an ache that never stops beating.  Here's the history of CVS, which launched as a health and beauty store and ended up buying Aetna some 50 years later.

1964 — The chain grows to 17 stores. The original CVS logo is developed (CVS banner inside a shield, with the words “Consumer Value Stores” below) and displayed on store exteriors for the first time.

1972 — CVS nearly doubles in size with its acquisition of 84 Clinton Drug and Discount Stores.

1978 — CVS/pharmacy finds success and differentiates itself from the competition by opening small health and beauty aids stores in enclosed shopping malls.

1987 — Stanley Goldstein takes over as chairman and CEO of Melville Corporation.

1988 — CVS/pharmacy celebrates its 25th anniversary, finishing the year with nearly 750 stores and sales of about $1.6 billion.

1992 — Caremark spins off from Baxter. The Caremark formulary is developed and clinical intervention programs are introduced.

1996 — Following the restructuring of Melville Corporation, CVS Corporation becomes a standalone company trading on the New York Stock Exchange under the CVS ticker. Stanley Goldstein is the company’s first chairman.

1997 — CVS completes its acquisition of more than 2,500 stores from Revco, the largest acquisition in the history of the U.S. retail pharmacy industry. The acquisition of Revco gives CVS key drugstore locations primarily in the Midwest and Southeast.

CVS/pharmacy announces plans to enter the Chicago market and continue expansion in Florida with stores slated for Fort Lauderdale and Orlando.

2002 — CVS/pharmacy continues to grow, announcing plans to enter Texas with stores targeted for high-population-growth markets such as Dallas and Houston. The company’s first locations in Phoenix and Las Vegas are also announced.

QuickMedx is renamed MinuteClinic in December 2002.

2006 — MinuteClinic becomes the first retail clinic to be accredited by The Joint Commission.

2009 — MinuteClinic begins a series of affiliations with major health systems across the U.S. to enhance access to high-quality, affordable health care services.

2011 — In March, Larry Merlo succeeds Tom Ryan as President and CEO of CVS Caremark. Merlo joined CVS/pharmacy in 1990 through the acquisition of People’s Drug.

In February, CVS Caremark announces it will stop selling cigarettes and tobacco products in all of its CVS/pharmacy stores.

In September, CVS Caremark removes all cigarettes and tobacco products from its CVS/pharmacy stores and launches a national smoking cessation program.

CVS Caremark announces that its corporate name has changed to CVS Health to further reflect its broader commitment to health care.

CVS Health completes its acquisition of Target’s 1,600+ pharmacies and clinics.

2017 — CVS Pharmacy continues to expand access to the opioid overdose-reversal medication naloxone in more than 40 states as part of the company’s multi-faceted approach to combating the nation’s growing prescription drug abuse epidemic.

2020 — CVS Health commits the full strength of the enterprise to focus on addressing the critical and urgent health care needs stemming from the COVID-19 pandemic. As a leader on the frontlines, the company becomes America’s largest private provider of COVID-19 testing, administering more than 15 million tests across 4,800 sites (through January 2021) — with an emphasis on addressing racial health inequities in Black and Hispanic communities.

The company also contributes more than $50 million in philanthropic actions in response to COVID-19.

CVS Health begins administration of COVID-19 vaccines. In partnership with the Centers for Disease Control and Prevention, the company is one of the first to offer on-site COVID-19 vaccination services for residents of nursing homes and assisted living facilities across the United States.

Once the active ingredient in the covid vaccine "replicates one time" you have a two-thirds dose. The next replication takes it to four thirds of an adult dose.

I will just take a guess that two replications might take 60 minutes but that could be mistaken.

The 2-4 year old testing should be interesting, I assume it will be given with other typical vaccines.

The High Wire features the latest members of "the club." (Episode 240)
It was a refresher of how I felt 30 years ago. Nothing has changed but the brand.
Can't say you haven't been warned....
https://thehighwire.com/watch/

Will the ages 5-11 product have a "Comirnaty" label? Or are these "watered down" EUA leftovers with a soon to expire shelf life? How long will they last? One week? If they wear off, we wouldn't know because most children have natural immunity by now, and those that might get Covid, it would be mistaken for a cold. Are the shots half price? Thanksgiving Clearance Sale?

If we don’t take WAPF’s traditional nutrition, organic farming, and actual medicine seriously as a nation, if we don’t completely end all vaccines, if we don’t clean up and eliminate or significantly reduce toxins (such as glyphosate, phytic acid, pesticide-producing genetic engineering, lead, arsenic, mercury, etc) from our food supply…

I see America catastrophically and violently collapsing to vaccine injury, aluminum adjuvants, and autism - along with healthy workers being disallowed to farm or work due to refusing vaccines - worse than the collapse of Venezuela, Rome, and the CCP combined.

Is America our land, or the private property of vaccine billionaires and China?

It’s a gamble. Now people who have or witness adverse vaccine reactions will associate ir with CVS not with their Drs office.

It is a trauma that never goes away.

And the only way to avoid this is to use individualized medicine. Which this isn’t.

So these people will never return to CVS.

Also it creeps me out that CVS owns Aetna and that through their discount card they now track all that I buy. How creepy is that? Argh. Holy Privacy Violation Batman. It’s so expensive kit to use the discount but hmmm. I am officially weirded out.

New CVS motto:
"Let us jab your 5 year old
with the biggest lie we've ever sold."
It's ok to be stupid.

"Our purpose
Bringing our heart to every moment of your health™."
Ironic that the product they are selling causes heart problems.

What is a modern pharmacy chain store? Basically, it's a giant convenience store like a 7-11 only much more junk. Ever think about what's in a CVS store? Poison. That's right. Wall to wall poison. There is a huge isle of nothing but 2 liter bottles of soda. Enormous alcohol section. Aisles of crap food that is bereft of any nutrition. Gigantic candy section that swells to epic proportions before holidays. A huge selection of cosmetics, most of which are not hypoallergenic. Health care products that shouldn't ever enter a human's body. Not to mention enough pharmaceuticals to toxify a small city. It's wall to wall highly-processed Roundup®-drenched poison.

Several years ago CVS made a big announcement of how they were no longer carrying tobacco products, and how much revenue they were going to lose. Everybody applauded. I wonder how much revenue the medical industry will gain over the years from customers ingesting all the poison in the CVS stores?