Pages of Hope & Humor: The Book of Sasquatch by Lou Conte 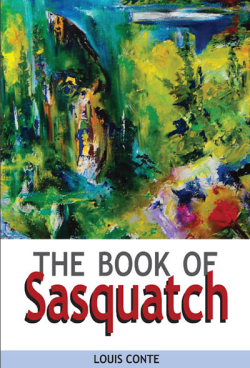 Note: Of COURSE we believe in Sasquatch!  We're Age of Autism - and we need to find hope, humor, compassion and a good butt kicking even if its from a big, smelly, inquisitive, intuitive, secretive, prank loving, justice seeking Sasquatch.  I read Lou Conte's manuscript many moons ago. Sometimes a book draws you deep into a new world. The Book of Sasquatch draws you into a new world that just might seem familiar. Squatch is a new superhero and just what we need. Especially with the controversy that is at the top of every news hour, late night comedy show and probably soon to be on every roll of toilet paper we buy. Sasquatch does not use toilet paper.

We have a signed copy to give away to one lucky Squatch reader. Leave a comment to enter. Order here.

The first question to ask about The Book of Sasquatch  would have to be, what could a novel about Big Foot possibly have to do with autism?

Masterfully, autism advocate Louis Conte weaves the story of a boy on the spectrum into the plot of his tale about Sasquatch, the highly intelligent, much sought after creature of myth and legend in the Northwest.

We are wise in ways beyond your comprehension . We were here first.

You humans are the simple ones, watching fantasies on TV and hoping to find Big Foot.

Sasquatch himself is our narrator in the story about those who pursue him. He also reveals the political unrest in the town of Deception Falls.

Some names are recognizable like the wise “Judge Holland” who understands Squatch’s intelligence and “Ralph Offit,” a hunter who ‘killed every kind of thing you can find in these woods,’ and who boasted of shooting at Big Foot.'

There is also the issue of opposition to a group home for disabled people and a young boy named Christopher who has autism. Marianne, his dedicated yet struggling mother, is worried about his future.

Christopher is non-verbal and tends to wander away from his home. Incredibly Squatch connects with him and is able to communicate telepathically. Squatch knows what’s happening to the boy because Christopher can “mind speak.” Squatch, who has little regard for humans, becomes his protector. Christopher teaches Sasquatch much about the world of people.

I could not abandon the boy.

The use of the word “poisoned” refers to the fact that Christopher’s mother recounts how he was vaccine injured as an infant and given the label of autism.

“When he was an infant, I took Christopher for a well-baby visit. The pediatrician and nurses smiled as they gave him his shots. A few hours later, he had seizures. During the days that followed, he had more and more seizures. Christopher was never the same after he was given those vaccinations. My baby was gone.”

There are several analogous things happening in Sasquatch, and they show us that respect for the natural environment, the native people and the disabled are intrinsically connected. The fate of Sasquatch is also our fate.

Squatch observes the world of humans who easily turn on each other and who also want to kill him, cage him or experiment on him.  The reader is left to ask who exactly the barbarians are.

I asked Louis about the making of his book. He told me this:

I pulled in a bunch of themes for this novel.

The Book of Sasquatch is a fable.

It’s homage to the mothers of people with autism. It strikes me that America seems deaf to what is happening to families who have to negotiate life with a child with autism. I wondered if they would think about women in this situation if the story was told by a non-human.

Why not a being who is mythical, magical but still human where it counts - in the heart, in the mind and in the soul?

In the end it’s about sacrifice, love and redemption and standing up for what is right even if you stand alone.

My goal was for us to not feel alone and reconnect our spirits to our myths (especially those from our Native American brothers and sisters), our beliefs and each other.

That’s why I wrote this crazy story.

Thank you fab article ,laughter is the best policy ,laughter is the best medicine !
Sasquatch -second cousin twice removed from the "Grey Man " who "bumps " and scares hillwalkers and climbers on the Buachaille Etive Mor Mountain.
The Gaelic Otherworld By John Gregarson Campbell .
Superstitions of the Highlands and Islands of Scotland and Witchcraft and second sight in the Highlands and Islands .

Thank you everybody! The cover is painted by Gerard Del Cole. Please visit his website at: https://www.paintingswithpassion.com/recent-work
I hope you enjoy the book. It belongs to all of you. You are the bravest people I've ever met. Much thanks to Kim and Anne.

The book is crazy but the writer is not well done looking forward to reading it.

I would love to read this book!

Thank you Mr. Conte for your spot on book. Well said Mr. Moffit and Ms. Hayes! It seems the doctors and nurses are not so quick to pull that covid-19 vaccine trigger once it is pointed at them or their love ones.
Blessings!
G. Martinez

Excellent review Anne!
I can't wait to read it. A great Christmas gift for extended family.

Lou writes: “When he was an infant, I took Christopher for a well-baby visit. The pediatrician and nurses smiled as they gave him his shots. A few hours later, he had seizures. During the days that followed, he had more and more seizures. Christopher was never the same after he was given those vaccinations. My baby was gone.”

Twenty two years since our pediatrician and nurse smiled as they gave our precious child his shots.

“In the end it’s about sacrifice, love and redemption and standing up for what is right even if you stand alone.”

Ahh, the story of so many of us here at AoA, who not only expose the lies that vaccines are safe, effective, and needed, but who now also expose the plethora of “Covid”-related lies. In the process, we courageously stand and fiercely fight for unfettered parental rights, medical choice freedom, and the fundamental human right to decide what we permit, or don’t permit, into our own bodies and those of our children.

That theme alone (in quotes above), in addition to Lou’s excellent writing skills, sound like the makings of a fantastic read.

I, for one, miss hearing from Lou here on AoA. Hope to hear him chime in again every now and then :)