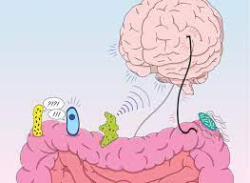 Note: Could the gut be the culprit behind the struggles of the young generation, riddled with anxiety, worry, and self-doubt? We know the role it plays in autistic behavior. And a certain doctor tried to ask hard questions a couple of decades ago, as you  may recall.....

The microbiome is the collection of trillions of microorganisms that colonize the digestive tract. Each person has a completely unique microbiome, made up of a network of microbiota originally determined by their DNA.

The microbiome is the collection of trillions of microorganisms that colonize the digestive tract. Each person has a completely unique microbiome, made up of a network of microbiota originally determined by their DNA. The microbiome develops rapidly during the first year of life. Previous research has linked human behaviors, including fear and anxiety, to the composition of the microbiome. It was due to these reasons that a research team from Michigan State University set out to study the emergence of fear responses in infants around 12-months old and examine if fear behavior is influenced by the development and composition of the microbiome. The Michigan State researchers theorized that there are critical windows in the development of the brain and nervous system in which variations in microbiome composition could impact infants’ fear behaviors and perhaps influence the physical structure of brain areas involved in generating fear. By recruiting a group of 34 infants, the study’s authors assessed microbiome contents and the volume of key brain regions at ages 1-month and 12-months. At the second assessment point, they also examined social and non-social types of fear behaviors in the infants. The study’s results indicated that the composition of the microbiome at 1-year “is significantly associated with increased fear behavior” and that differences in microbial colonization causes differences in fear. The researchers based these findings on a task designed to measure non-social fear. They also discovered that certain qualities of the 1-month microbiome were additionally associated with increased non-social fear at 1-year. Additionally, this study demonstrated a “suggestive” relation between contents of the infant microbiome and volumes of the amygdala and the prefrontal cortex. Despite finding associations between microbiome and variations between individual fear responses among the infants, the study’s authors say it is too early to label any specific microbiome contents as good or bad. This is mostly due to differences among individuals and also because some microbes may have positive and negative impacts in different contexts.

.If the microbiome is not under attack as Dr Wakefield got close to establishing via vaccines it would help and give the newborns a chance of normality as we used to know it a hundred years or so ago..

Interesting work, but who today will fund research aimed at generating knowledge? Collins and Fauci won't, and certainly pharma won't.

Critical window of development, that one is going to be impossible to check out.
Brain mapping might not be the right way to measure this.
.
Old dogs and old people are startled much more easily than when they were young.

Still it is not normal for the number of young people I have witnessed, to be scared of driving.
Perhaps they know something is not right with concentration, or mild absence seizures, and they are in danger?

Just like some older people stop driving cause they know intuitively..

But if they figure a brave pill we will be the first in line to take a fecal transplant ? pill or enema.. .