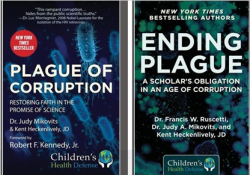 A message from Skyhorse Publishing in conjunction with Children's Health Defense:

Drs. Frank Ruscetti and Judy Mikovits and I need your help today to expose their plague of corruption and show what dangerous charlatans they truly are.

By ordering a copy of their new book today — “Ending Plague: A Scholar’s Obligation in an Age of Corruption” — you can help push the book to the top of the New York Times bestseller list.

The sooner we reach that milestone, the sooner the whole world will know the truth. If you’ve already ordered their book, thank you. Can you now share this post today with family and friends? Or better yet, order several copies as gifts?

A year after Dr. Mikovits and Kent Heckenlively first exposed the Plandemic with their banned, groundbreaking short film with Mikki Willis and their runaway New York Times bestseller Plague of Corruption, they have returned with another book that uncovers even more of the untruths and corruption in our government’s health institutions.

Dr. Frank Ruscetti, a thirty-eight year veteran of the National Cancer Institute, who worked closely with people like Fauci and Gallo, offers a true insider’s portrait of his nearly four decades at the center of public health. His insights into the successes and failures of government science will be eye-opening to the general public. What he and Dr. Mikovits reveal not only obliterates the media spin . . . but should also alarm every American who cares about this country—and the future our children will inherit.

In their book, they reveal:

1. How the HIV/AIDS epidemic was a complete calamity compromised by the egos of Robert Gallo and Anthony Fauci, leading to the unnecessary death of millions.
2. The lies told about chronic fatigue syndrome (ME/CFS), often referred to as “non-HIV/ AIDS” which has disabled millions of women and men.

3. How the autism epidemic is not a natural phenomenon but is based on what we are doing every day to children in pediatrician’s offices around the world.
4. Why and how the COVID-19 crisis has been lied about from the very beginning and how we are creating a catastrophic health problem for generations to come.
5. Profiles of some of the brave individuals and therapies which have the potential to usher in a golden age of health for all of us.

Order your copy today: Ending Plague: A Scholar’s Obligation in an Age of Corruption.

How do we stop this horrifying and rampant corruption? Before millions—including those forced to choose between their health and their jobs and educations—are needlessly harmed by experimental vaccines and the drive for Big Pharma money?
By pushing Ending Plague to the top of the bestseller list.

Order your copy today: Ending Plague: A Scholar’s Obligation in an Age of Corruption. Their book will be met with fierce criticism and relentless attempts at censorship—in the words of Plato: “They deem him their worst enemy who tells them the truth.”

But tell the truth we must—and I need your help to do that.

It is my hope this book will not only reveal the truth about Dr. Fauci , Robert Gallo, and Big Pharma, but will also motivate—and mobilize—millions more advocates for truth, health, and democracy.

Ending Plague was released on August 31. By ordering your copy today, you’ll help push the book to bestseller status—decreasing the chances it will be censored, and increasing the chances that we’ll succeed in exposing the rampant plague of corruption present in our government today.

Thanks M cause I did try and it did not show up the first time.
I see that is has now.

My link to Prof. Donald Scott's web page doesn't seem to be working - possibly because it's picking up a period that doesn't belong at the end. Here it is again:

I've just checked it again and it is valid and well worth a look.

M
I look forward to reading Ending Plague.
The history of scientific inquiry is amazing, I am grateful when there are those who can add depth to its story.

The mention of AIDS and chronic fatigue syndrome brings to mind a brilliant library-researcher of whom few will have heard: the late Donald W. Scott of Sudbury, Canada The professor, who was a distinguished science educator though not a Ph.D., began his study of CFS in an effort to help a friend who suffered from that then-puzzling condition. Already in his 70's at the time, he never looked back and his efforts, up to his death some years ago, brought forth a series of remarkable books. Unfortunately, his work seems to have died with him.

"The Brucellosis Triangle" is particularly telling and appears to be still available on Amazon. I strongly recommend it. His website (now outdated) is: http://www.whale.to/v/scott.html.

I really enjoyed the "Plague of Corruption"
Am I understanding this right, that now Ruscetti has opened up flood gates of his knowledge about Fauci? That should be interesting.

Oh, I see!
I rushed over there and the book on Fauci is still set for Nov 09.
You prankster you.

"Still with Trump" Do you know why it is not coming out?

And for some reason, Dr. Fauci's November book "Expect the Unexpected" will not be going on sale.

We .. as a trusting country … have been lied to for decades by those … mostly unelected career bureaucrats that occupy every institution we rely upon for TRUTH … the military debacle in Afghanistan is just the latest episode to reveal how corrupt many of our governmental institutions have become. Consider the fact our military has squandered BILLIONS over twenty years occupying Afghanistan .. everyone has been telling us .. the people .. that we were making PROGRESS year after year .. only to now learn it was all a lie .. they knew Afghanistan would collapse the moment we disengaged our troops. Worse there will be no one to be held accountable .. none .. and we are destined to repeat these types of national debacles because of it.

I have every reason to suspect the ongoing PANDEMIC over Covid is being as mishandled by public health BUREAUCRATS as was our military in Afghanistan .. and .. once again when TRUTH finally emerges .. NO ONE WILL BE HELD ACCOUNTABLE.

As for Fauci himself .. his deliberate LYING about the highly successful TREATMENTS .. such as .. HDC and Ivermectin .. will not be prosecuted for the CRIME it was .. costing THOUSANDS of lives .. nor will Gov Cuomo be held accountable for his insane proclamation that forced Senior care homes to accept Covid positive patients into their very vulnerable facilities .. which also cost THOUSANDS of lives.

God help us if some of the dire warnings about the "warp speed" covid approval come true .. the entire globe will be affected for generations to come. And .. if history is our guide … NO ONE WILL BE HELD ACCOUNTABLE FOR THE CRIMES AGAINST HUMANITY THEY COMMITTED..