Dice Fell Down and Now He Frowns 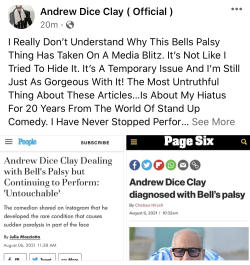 Who remembers Andrew "Diceman" Clay’s filthy nursery rhymes in the 80s??  My ex had a tape in his car. (Insert hindsight emoji.) Here’s one I just made up! Jack and Jill went up the hill to fetch a shot that’s falsy. Dice Clay was down & now he frowns because he got Bell’s Palsy.

Full  Disclaimer - I have NO idea how he got Bell's Palsy. None. I am making a joke about the jab, which has included BP as a side effect. And we know about “side effects.”  Becasue if we don't laugh a little, we will all go stark raving mad.

And of course, we send thoughts and prayers for a full and complete recovery.  I was thinking of seeing him live next month here in Connecticut.

By the way, If you get a chance to see Jim Breuer on his Live and Let Laugh tour, GO! I saw him last weekend and he slayed the audience with his take on the last 16 months. Trust me, our readers would howl with laughter.

The real story for Dice Clay isn't that he's angry at the media for their dismissal of his career, it is that so far, none of the comments say, "Did you get the Covid or any other vaccine that lists Bell's Palsy as a side effect?" No one dares or no one has connected the dots, I don't know. I'm not in the mood to have my arse handed to me on a silver platter, so I did not bother to  chime in with what is to our readers, a logical question.

I Really Don’t Understand Why This Bells Palsy Thing Has Taken On A Media Blitz. It’s Not Like I Tried To Hide It. It’s A Temporary Issue And I’m Still Just As Gorgeous With It! The Most Untruthful Thing About These Articles…Is About My Hiatus For 20 Years From The World Of Stand Up Comedy. I Have Never Stopped Performing Live. One Of The Reasons Why People Call Journalism Fake News…Please, Just The Facts From Now On. I Am Working Out Constantly As You Can See From My Posts And Have Been Killing It With My Live Performances. See You At @citywinerynyc Monday Night!

99% of vaccine injuries are not reported

With vaccines and gambling, the house always wins.

Keep an eye on this. It "escaped" from a lab in Germany in 1967. Ebola is also a hemorrhagic fever. The victim bleeds out. Sounds familiar.

Ask her to document her experience in writing. Keeping a diary timeline would help others to know what is going on. Has she had a D Dimer test to show if she had any micro-clotting? Switching vaxxes is experimental. There were no Safety trials done on that.

A friend of mine woke up the morning after her AZ (UK) shot in January. When I spoke to her a few months ago, she wasn't sure about getting the second one. I spoke to her again last week and she is almost completely recovered now and, yes, she did have a second shot, but the Pfizer one and is, so far OK.