Celebrities are STUPID Don't Listen To Them! Except When They Are Propagandists. 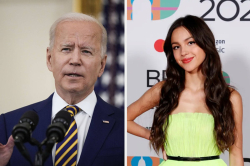 Set your Jabberwocky meter to stun. Remember kids, when celebrities share their personal experience with vaccine injury and vaccination choice, they are stupid sluts (if female) and stupid dunderheads (if male.)

Newsweek, December, 2020:  The list includes Jenny, Jim, Jessica, Kat, Rob, Toni, Kristin, Alicia, and others, but is HARDLY a compendium of "every" celebrity. How shoddy.  Every Celebrity to Speak Out Against Vaccines

Last week, President Biden trotted out 18 year old Olivia Rodrigo to make Tik Tok videos encouraging young, healthy Americans to get the Covid vaccine.  She wants you happy, healthy, and vaccinated. (Teen Vogue.) Newsweek July, 2021. Olivia Rodrigo and These Other Stars Are Urging People to Get the COVID-19 Vaccine

If you're thinking this is a political post on our part at AofA - think again. Propaganda is a useful tool on both sides of the aisle - What do Billy Ray Cyrus, Dwyane Wade, and Dr. Oz have in common? Practically nothing, especially not their politics. Yet they found themselves on a list of ten celebrities approved by the Trump White House for a planned COVID-19 ad campaign to “defeat despair and inspire hope.”

Propaganda: information, especially of a biased or misleading nature, used to promote or publicize a particular political cause or point of view.  Women were "sold" the idea of joining the workforce during WWII using government created propaganda:

To mobilize these women, all of the government propaganda needed to communicate a central theme...it concentrated on personal patriotism and emotional appeals. The patriotic appeal had two aspects, the positive "do your part" approach and the negative "a soldier may die if you don't do your part" warning. The campaign slogan "The More Women at Work-The Sooner We'll Win" promised women that their contributions could bring their men home sooner. (Rupp 1978, 156).  The Office of War Information was responsible for "selling" the war to women. It sent monthly guides to magazine and newspaper editors and radio commentators, suggesting approaches to war topics. The OWI also allocated air time and print space, so that the media would stress the same themes at the same time. It distributed films and maintained a close relationship with the War Advertising Council. The agency launched campaigns and urged magazines to cover working women in their articles (Berkin and Norton 1979, 344).

Again, with ideology aside, Pharma profiteering carries the added stink of marketing to minors, remember Vivek Murthy on Sesame Street. I’m sure it will be only a matter of months before he returns to Elmo’s World to hock the COVID shots. I’m guessing he won’t be telling his five-yr-old audience about, blood clots, Bell’s palsy, or VAERS.

Kim .. in my humble opinion … EVERYTHING today has become POLITICIZED .. consider .. SPORTS, ENTERTAINMENT, ACADEMIA, SCIENCE, MEDIA, MILITARY, JUSTICE SYSTEM .. I cannot think of a single institution that has not been POLITICIZED …. especially our PUBLIC HEALTH SYSTEM.

Dr Fauci represents the worst of public health being POLITICIZED … when then President Trump extolled the remarkable success of HDC as a treatment for Ccvid .. Fauci immediately launched a dis-information campaign saying HDC was extremely harmful not helpful. Our politicized media immediately supported him and many State Governors actually BANNED HDC in their states .. denying thousands of what has since been proven highly effective if prescribed early and correctly.
At that very same time … BOTH BIDEN AND HARRIS raised serious concerns about Covid vaccines saying they could not trust TRUMP to provide safe and effective vaccines at "WARP SPEED'. Today the Biden Administration is seeking mandatory vaccinations by corporations of their employees.

Agreed BOTH SIDES USE PROPAGANDA .. but … it is not the propaganda that threatens me .. it is the POLITICS that has overtaken just about everything in our country.

13th July - New study finds that the most successful way to convince someone to vaccinate is through them talking to friends and family.

14th July - The White House enlisted 18yo pop star Olivia Rodrigo, who has millions of followers on social media, to help boost lagging vaccination rates among youth. "It's important to have conversations with friends and family members encouraging all communities to get vaccinated," she told reporters.