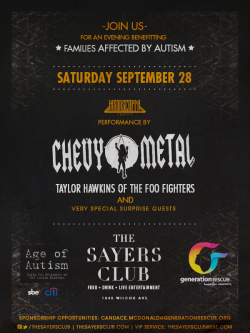 Tough to see 90s grunge band Foo Fighters hold a vaccinated only concert tour. Read a mainstream report here. In 2009, Foo's drummer Taylor Hawkins generously donated his time and talent to a fundraiser for Generation Rescue and Age of Autism. Josh Coleman held a V is for Vaccine event outside a Foo concert last week.

From V is for Vaccine:

Protest Against Segregation at Foo Fighters Concert for
"Vaccinated Only" Attendees

Agoura Hills, CA - On June 15, 2021 medical freedom activists protested what they are calling discrimination and modern day segregation, outside of the Canyon Club in Agoura Hills. The Foo Fighters held the first "vaccinated only" concert at the venue, allowing only attendees who have received the COVID-19 vaccine. Concert goers were required to show proof of vaccination for COVID-19 to enter the venue. This is the first of many events still to come that will be allowing only patrons who have received the COVID-19 vaccine to attend.

Among the dozens of protesters was actor and outspoken conservative Ricky Schroder who stated, "We can't live in a country where they segregate people and discriminate against people that vaccinate and don't vaccinate." Segregation is defined as the action or state of setting someone or something apart from other people or things being set apart.

I can't believe I stumbled on this. Since this day Foo Fighters lost stage manager Andy Pollard 45yo and Drummer mentioned here Taylor Hawkins 50yo. RIP

Two Frenchmen enter a bar. One was vaxxed and the other was not.......

THIS IS NO JOKE:
French face 6 months in jail for entering bar or restaurant without a COVID pass
Owners face a year in prison, €45,000 fine

"President Emmanuel Macron announced earlier this week that those unable to prove they’re vaccinated or a negative COVID test (at their own cost) will be banned from using public transport, entering a cinema, shopping mall, bar, cafe, restaurant and other venues from August 1st."
https://www.wnd.com/2021/07/french-face-6-months-jail-entering-bar-restaurant-without-covid-pass/
The war against freedom is steamrolling ahead!

Carol,
I have no problem respecting people's personal, informed decision re the vaccine. But what they are supporting in this case, imo is the beginning of medical apartheid. Many people, like you, have natural immunity; in fact more than 40 million Americans. Yet they are being forced to get a potentially risky liability free medication they don't need. Right now, its "only" concerts, but what if it becomes for food? And what about those who medically can't get the shot? For the first time discrimination because of medical disability just became okay. And for those whose religious beliefs don't support vaccination, also discrimination based on religious beliefs.
I do wish them all continuing health, respect their own personal medical choices, and sincerely hope that the unexpected death of their manager had nothing to do with his recent vaccination.
The vaccine is not risk free, and it has already killed.
Michigan had exactly two deaths in the whole state in children age 5 to 14 during the whole year of covid infections. ( other sources have said no child in the USA died unless they also had underlying conditions.)
https://www.mdch.state.mi.us/osr/Provisional/CvdTable2.asp

Yet the death of this young man, Jacob Clynick, at the age of 13 from heart inflammation following his second Pfzier shot in Michigan did not even make the mainstream news.
Tami Burages posted on twitter about the death of her young nephew.
https://twitter.com/tburages
His name is Jacob Clynick; you can see his vaccination card, he died at age 13, three days after his second shot, despite, per his aunt, having no underlying conditions.
There is a go fund me to raise money for his funeral,
https://www.gofundme.com/f/jacob-clynick-funeral-fund
and also a funeral has been arranged.
Condolences to his family on their loss.
Have other children also quietly died from the shots, but no one posted their vaccination card on twitter? Are more children going to die from the shots than died of Covid?
Even information about this case seems to be getting silenced. Why is it not being talked about on the mainstream news?

Two of the three members of my family went to a California tourist attraction that seemed safe in the sense that protocols were in place. But at some point they found themselves trapped on a crowded (almost completely maskless) bus with a driver who refused to open the windows because it was "dusty." All three of us, having quarantined for a year, got Covid, probably as a result of this outing. I was the only one seriously affected: cough and fatigue kept me in bed for 2.5 weeks. (I have a pulse oximeter so I checked often for hypoxia.) I watched "Band of Brothers" and "The Pacific." Twice. That was fun.

But I accept that other people have worse outcomes and the reasons may not be obvious.

I'm actually glad I got Covid, but I'd rather yahoos on a bus hadn't made that decision for me. Whether or not getting the vaccine keeps you from being a transmitter, I think the Foo Fighters made a reasonable business decision for this point in time.

Laurel & Hardy There's going to be a fight. YouTube

A lot of this has to do with venue. While I get that the artist should take a stand, money & the need to express sometimes wills out. The real test will be if they play venues that don’t care about the vaccination status of its patrons.

Let those of us who are without sin cast the first stone.

Fool Fighters... of course they would reply with "no comment" they are afraid to say out loud what they are saying with their actions. 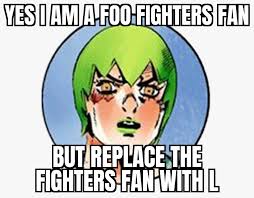 "Meanwhile, Sky News out of Australia is reporting that airline companies in Spain and Russia are warning COVID-19 “vaccinated” people not to travel because of the risk of blood clots."

Nobody dies from death these days only Covid..

Foo Fighters mourn death of longtime stage manager Andy Pollard
A statement from the band confirmed that Pollard, who was their stage manager for 12 years, died this morning (June 18). No cause of death has yet been revealed.

It's sort of the antithesis of alternative rock to be so out of touch with real people hurt by vaccines and at the same time, so in touch with corporate robots running venues like Madison square garden and canyon club. Anything for buck in America, right guys ?

Would have thought Foo Fighters accepted the hard earned advice of Eric Clapton … who suffered extraordinary adverse reaction following his "second shot" of vaccine … which left him wondering if he would ever play guitar again .. let alone live a normal life.

As Ricky Schroder observed: "We can't live in a country where they segregate people and discriminate against people that vaccinate and don't vaccinate."

Unfortunately we now live in a country determined to DIVIDE us into TRIBES .. vaccinated v unvaccinated is just the latest TRIBE we are being forced to JOIN. Whether the TRIBE IS BASED ON SKIN COLOR, SEXUAL ORIENTATION, RELIGION, WOKENESS … on and on .. neighbor against neighbor … family members against family members … we are on a dangerous path to the BALKANIZATION of our formerly UNITED COUNTRY … the worst part the division is not accidental .. it is DELIBERATE AND WELL COORDINATED WITH BIG CORPORATIONS, MEDIA, EDUCATION AND THE ENTRENCHED SWAMP OF CORRUPTION THAT IS OUR GOVERNMENT.

GOD BLESS US AND THE COUNTRY WE LIVE IN .. THE UNITED STATES OF AMERICA ..LAND OF THE FREE AND BRAVE