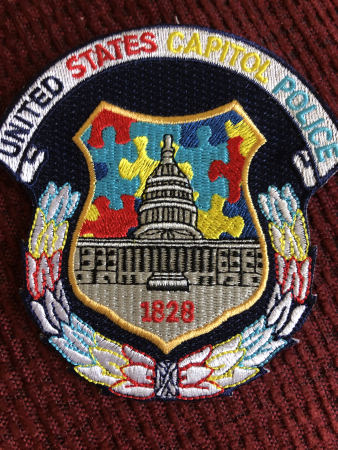 So much of the news today is grim and worrisome. As a nation, we are at each other's throats because of sociopolitical change, Covid, election fall out and more. April is typically loaded with feel good autism stories. Some are maddening, others give us hope for the future.  This United States Capitol Police patch was created for Autism Action Month 2021. Here's the story of how I came in possession of this badge, because (say it with me) all roads lead to autism. I have had helpers for my three daughters over the years. One young woman joined our ragtag army when she was in college. Her older brother has autism, and attends the same day program as my two oldest daughters.  He's tall, handsome and has a smile that could light up the night sky. His sister came to us fully trained, because she had lived with autism all of her life. Fast forward four years, and she achieved her dream job - she was recruited to the United States Capitol Police force!  I watched her swearing in ceremony on Zoom last year. Her first months on the job have been harrowing, as you can imagine. She has seen two colleagues die, more than many police officers will see in a lifetime. But she's tough, dedicated and so ready to move up the ranks of the force. And she will be a strong voice for people with autism who may come into contact with the police.  That's something to salute.

Cancel cop culture and the same senators that were demanding cancelling cops when Capitol Hill was invaded -who did the senator's call in their time of need, the cops. Hope your carer makes it Kim and fights on, a good one to have our and kids backs.

Bill: Your comment about the Temecula group home illustrates what said once before. There have been plenty of autistic George Floyds, but the media scarcely notices.

I think law enforcement need training for the mentally ill and developmentally disabled in addition to over use of ethnic sensitivity training. Many states and counties are doing law enforcement training related to Mental Illness,Intellectual Disability,Developmental Disability but not enough training to solve the problem.
I also cry in anger when I hear about non-Islamic extremism like the two attacks on the capitol building down played by media on both sides of the political spectrum whether the offenders were a large group of far-right wingers that caused multiple deaths and massive property and emotional damage or a single black separatist who did minimal damage and apparently a single death.
In a related matter there was a massacre at a poorly licensed "group home" in Temecula California in which a poorly trained and poorly vetted "caregiver" murdered 4 developmentally disabled men in 2016 and the media coverage was minimal because of a more well known mass murder incident during the same year in a nearby town. This tragedy also show need for better training of caregivers and background checks of those workers.

Blessings to all of those who serve our nation.

Sadly there are some who want to destroy freedom wherever it is found.