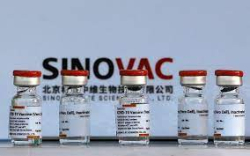 Excerpted from Epoch Times. Doesn't sound too different from what happens here in the USA. At least Europe and Canada have exercised an abundance of caution.  We hand out donuts and shame.

The Hong Kong government recently rolled out a large-scale vaccination plan against the CCP (Chinese Communist Party) virus, commonly known as COVID-19, but it’s been mired by frequent reports of serious adverse reactions. In just one month, 13 people died in Hong Kong after being inoculated, 11 of whom had been injected with the Sinovac vaccine, a Chinese domestically made vaccine.

The CCP has not reported a single case of serious side effects or death after it announced the administering of 100 million doses of the Sinovac vaccine in China on March 28.

But there are four strange phenomena of the Chinese Sinovac vaccine, analyzed as follows.

No Deaths Reported in China

The first reported death after vaccination in Hong Kong occurred on Feb. 28. On March 28, within just one short month, 13 people in Hong Kong, aged 55 to 80, died after receiving the vaccination. Eleven of them were given the Sinovac shots, while the other two had received BioNTech.

In addition, an elderly woman in her eighties died at home the day after taking the Sinovac vaccine on March 20, but the Hong Kong Department of Health did not report it nor publicize the incident. The Department of Health responded in the early hours of March 31 that “there was no direct causal relationship between her death and vaccination, thus not fulfilling the reporting criteria of AEFIs (Adverse Events Following Immunization).”

In an interview with The Epoch Times, Yuen Hoi Man, deputy spokesman for the medical policy of the Democratic Party of Hong Kong, criticized the government for depriving the public of the right to know by not releasing the information, which also affects public confidence in vaccines. He said that even if there is no direct relationship, the government should be truthful when an indirect relationship cannot be ruled out.  Read more here.

As someone who has read extensively about Buddhism, Bill, and thoroughly agree with their philosophy, I cannot agree with your comments.

However, part of their teachings is acceptance and detachment, so I will comment no further.

I do not care what people say. Even if the Chinese government has taken over Facebook YouTube and Twitter it would change very little about the fact that China had way fewer cases and deaths than the United States. No one can deny the Chinese government's political sway on the Internet. Why can not I talk about Buddhist extremism and semi Buddhist cult violence or is it only Islam that can be criticized. Falun Gong and the cult's media mouthpieces are dangerous to the United States and Taiwan, despite most of the cult's followers being resident in those countries. I know a person that died in my family and 5 more that needed emergency car they were older middle age relatives and they died from Covid-19.

The "Peaceful" Lama and their 10 story manor houses their xenophobic, theocratic facade of "peace and stability" was crushed by the People's Army circa 1949 and freedom of religion was introduced to Tibet. Infectious Diseases and illiteracy became rarer in the Sino-spehere including Tibet thanks to Chinese government influenced modernization even if the country of China and it political predecessors are poor and corrupt.

"Logic" is not in the propaganda vocabulary.

May your days always be better

I’ll take that as compliment - only on good day.

My comment is meant to be read with a David Attenborough accent, largely in part because that’s how I think John Stone sounds.

"As many as 246 Michigan residents fully vaccinated against COVID-19 were later diagnosed with the virus..."

Their pat answer for this is that they must have had the virus before they were given the shot.
Which strain of virus was each person infected with? Supposedly, the shot was based on the first virus found in Washington State. It has supposedly mutated many times since. What was the PCR cycle rate used for the diagnosis? C'mon, man. Let's do some real science.

Don't ya link me to stupid -- lying wiki please.
It is a good go to to find out the basics that might or might not be true. They don't mind lying to suit their purpose.

How much has the Chinese Communist Party took over google, facebook. and wiki?

Let me see - what was the news story about google and facebook hiring 6 Communist Chinese nationalists to come to Seattle and find ways to censor - with some kind of coding algorithms.

Meant while I found this:
The writers of Epoch Times are anti- Communist. They use truth and tradition as their guiding light. They highlight the best in humanity with lessons of history. The founders were Chinese-Americans who fled Communism. They bring to the world uncensored and truthful information. Anti-vax is not a conspiracy theory. One need only research to find out the facts as Children’s Health Defense has pointed out. March 2, 2020 CDC lost a Federal Court Case, a lawsuit with Informed Consent Action Network where they could not prove vaccines do not cause autism. Sadly media was silent in the reporting of such an important lawsuit.

Bill where did you get that information?
Please link me to it so I can judge if I believe that or not.

Wonder if that Chinese student that stood in front of a tank in Tiananmen Square was one of them Buddhist monks, or what I originally understood just wanted freedom- from elite crappy people so bad that he was willing to die for it?

At the height of Media Measles Mania six (or so) years ago; pre-Trump and in the run-up for removing exemption rights (SB277 ish era) the ability for the general public to discuss specifics of the different vaccine programs throughout the world, and even individual vaccines, became slightly improved. One of our fearless heroes, Mary Holland, was even able
to get in a brief comment (to paraphrase) that she wished industry would make a monovalent measles vaccine and that people should be able to get precisely what they may need. As we are now faced with mania over an infection for which Pharma’s only answer is injections for all people, of all age groups, it is fascinating, to watch the adult world evolve beyond the binary - vaccines yes/vaccines no. The discussion of which vaccine(s) at what what age is something the general population has been able to mainstream for years, however, so much of vaccine propaganda is contingent on dumbing down the conversation as much as possible. Limiting people’s choice, dividing and conquering, are the tools of tyranny. However, with more and more people waking up, as the consequences are now personal, this Fauci virus gains more function every day.

Even if the the Chinese Communist Party is downplaying the deaths by a factor of ten then there was only about 35,000 deaths in the Wuhan area and only about 45000 across chine from Covid 19 way less than the United States. The number is after you times the number of counted deaths by ten. Epoch Times is a newspaper written by a violent semi-Buddhist cult called Falun Dafa. These maniacs set themselves and others on fire in China,Taiwan and elsewhere.

So, this vaccine is fine for the Communist Chinese Mainland people since not a death has been reported,

Oh, I guess from all the deaths in Hong Kong that maybe the Communist Chinese Mainland party has used the genetic engineering bioweapon/vaccine to target the Hong Kong Island People whom they dislike.

Well; Hmmm?
Either that, or the Communist Chinese Mainland is doing what all Communist do, kill off their own population by the millions within their borders all quiet and stealthy like by starvation and hard work like Stalin did to the Ukraine, Pol Pot did in Cambodia, Oh-- and the Communist Chinese Mainland did starve to death 45 million just a few decades ago. I think they learned from the German communist/fascist when they messed up and tried to gas everybody. Lesson learned, it is all okay if it is natural -- vaccines fit the bill. .

"As many as 246 Michigan residents fully vaccinated against COVID-19 were later diagnosed with the virus, and three of them died, Michigan Department of Health and Human Services confirmed Monday."

Again all together now … CORRELLATION DOES NOT MEAN CAUSATION