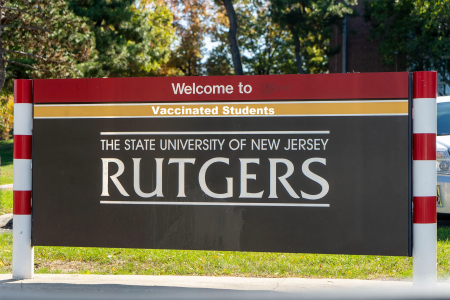 Temps must be rising at New Jersey 101.5.  Below is an opinion piece questioning Rutgers' University's announcement that it will REQUIRE Covid vaccination for all students.

God bless Serena DiMaso, the lone Republican lawmaker who is questioning Rutgers’ new mandate to require vaccines for all students.

And when I say “vaccine,” I use the term loosely because this protocol is actually an experimental gene therapy cloaked with the name "vaccine” so that the federal government can’t be sued for it if it doesn’t work out well.

DiMaso, according to an article on Patch.com, is writing a bill to prevent Rutgers from requiring kids to be guinea pigs with this injection in order to qualify for the Sept. 21 enrollment.

DiMaso understands that forcing kids to take this “vaccine” is wrong, and she also understands the hypocrisy of only requiring it of students, not teachers. That said, according to Children’s Health Defense, a children’s health watch group run by Robert F. Kennedy Jr., Rutgers is being warned about the legality of mandating the vaccine. According to the website, RFK Jr. wrote to Rutgers president Holloway and reminded him of the federal statute:

Bottom line is this is an emergency use “vaccine" and cannot be forced upon people.

Will Rutgers heed the warnings of Kennedy as well as the obvious controversy that will inevitably surround their decision to force the shot into students? Will they stop to think about the dangerous precedent they are setting?

Only time will tell.

When I use the term “dangerous” in speaking about the mandate to vaccinate all Rutgers students that was recently announced, I’m not talking about the danger of the “vaccine" itself, although I believe that that danger is a possibility. I am talking about the danger of the mandate itself — not to mention the precarious road we are on when it comes to the erosion of freedom and liberty and the proliferation of government overreach, particularly in terms of one’s health.

The post above reflects the thoughts and observations of New Jersey 101.5 talk show host Judi Franco. Any opinions expressed are Judi's own.|

"(2)Vaccine
The term “vaccine” means any substance designed to be administered to a human being for the prevention of 1 or more diseases."

My TRANSLATION- Anything can be put into a human being in any way with the INTENT (design) of preventing 1 or more diseases. IT DOESN'T HAVE TO WORK. It doesn't have to target a communicable disease. It does not have to contain an attenuated virus. This definition is broad enough to float a mRNA (formerly gene therapy) injection through. Let's introduce legislation to change the definition back to the original "attenuated virus" only definition. The biggest power grabs have been through changing the definitions of words....and not advertising it.

Well, if we have to small claims these small businesses to death, so be it!!!

"And when I say “vaccine,” I use the term loosely because this protocol is actually an experimental gene therapy cloaked with the name "vaccine” so that the federal government can’t be sued for it if it doesn’t work out well."

In the past, I have posted on the Federal legal definition of "vaccine" as used in the Federal legally defined term "taxable vaccine", which is how the current CDC "recommended" vaccines are defined. The definition was changed after the original 1986 vaccine law was passed. They must have anticipated the mRNA product, because the way the current law defines "vaccine," it could be included. The only thing protecting us from forced vax is the EUA status which requires voluntary consent. I believe there are legal grounds to challenge required EUA vaccination from a private or state entity. They have no jurisdiction over a Federal product. They cannot practice medicine without a license. There is currently no proof that the EUA injection prevents longterm transmission of SARSCov2- their only reason to attempt to require the vaccine.

Syracuse University has announced they will be requiring it as well. We live in frightening times.

I suppose it is a good thing to have so many prominent media personalities on various outlets questioning the justification of issuing VACCINE PASSPORTS to everyone .. with the implied carrot on the stick that only vaccinated will be allowed to resume what was once our NORMAL LIFE.

However .. it infuriates me when I think of the INDIFFERENCE these suddenly interested parties have shown over DECADES as our CHILDREN have been DENIED ACCESS TO PUBLIC SCHOOLS AND EDUCATION IF THEY ARE NOT VACCINATED WITH THE SIXTEEN VACCINES .. OVER 72 DOSES BY AGE 18 … THAT ARE APPROVED AND RECOMMENDED BY THE VERY SAME PUBLIC HEALTH AGENCIES AS THOSE PROMOTING VACCINE PASSPORTS FOR EVERYBODY.

To them I say … WELCOME TO THE WORLD OUR AUTISM COMMUNIY HAS LIVED IN FOR DECADES … GLAD TO HAVE YOU FINALLY SPEAKING OF THE VIOLATION OF OUR HUMANITARIAN RIGHT OF INFORMED CONSENT THAT OUR COMMUNITY AND CHILDREN HAVE ENDURED FOR TWENTY ODD YEARS.

BETTER LATE THAN EVER. IT WOULD HAVE HELPED TO HEAR YOUR CONCERNS VOICED MORE THAN TWO YEARS AGO WHEN NYS ISSUED A PUBLIC EMERGENCY OVER A SMALL OUTBREAK OF MEASLES WITHIN CERTAIN RELIGIOUS COMMUNITIES WHO WERE KNOWN TO HAVE RELIGIOUS OBJECTIONS TO MANY VACCINES.

An international training deficiency? leaving the students and tutors dizzy ?

https//www.bma.org.uk
Pushing back -tackling the anti-vax movement- BMA
11 Jan 2021 By Seren Boyd
Can the educational leadership please,
Describe in detail, the definition of an Anti-vaxxer, is what exactly?