Around this time last year, I noticed that autism had all but dropped off the news cycle.  It appears to have taken a back seat again this year.  No big fan of how the month of April has been blue-washed for well over a decade, I’m okay with fewer autism awareness campaigns.

Always a strong proponent for autism action, I’m not even seeing that in this month’s news stories.  Like the flu, and like the measles, COVID19 has replaced illnesses, diseases, and other health conditions the world over.

Autism awareness may have disappeared from the media, but the autism epidemic still exists.  Some will argue that autism, a spectrum disorder, is not an epidemic.  While it’s not a disease or illness, autism, a condition that can significantly impact physical and mental health, does fit the CDC’s definition of epidemic. From their website: CDC.gov

epidemic the occurrence of more cases of disease, injury, or other health condition than expected in a given area or among a specific group of persons during a particular period. Usually, the cases are presumed to have a common cause or to be related to one another in some way

Last updated in 2020, the current rate, which has risen steadily for decades, is 1 in 54 reported cases.  Even though the numbers are not a true representation, if that trend continues more will be added at the next reporting period.  Based on data from years ago, and from only a handful children in only a handful of states, a more accurate rate is likely much higher.  With that, I’d say that one can absolutely use the word epidemic to describe what’s happening! 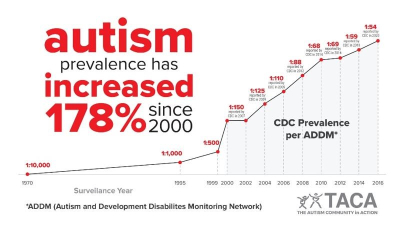 Regardless of how high the statistics are, autism news is scant these days.

When I looked for an autism-specific news story last Tuesday, a few half-hearted reports of groups “lighting it up blue” could be found.  But they certainly didn’t come with the pomp and circumstance previous April autism stories have had.  I did notice, however, that some are pushing for autism acceptance this year, not awareness. Acceptance?  I’d rather not.

Why should I accept my child’s developmental delays?  Yes, he has them, but wouldn’t it be better to address them than to just accept them?

Why would I accept my son’s deteriorating health?  Shouldn’t I do something about it instead?

Why also would I accept my son’s former doctor’s ignorance and unwillingness to investigate the liability-free vaccines she prescribed?  Those contributed to the regressive autism diagnosis he’d eventually received.  Wouldn’t it be wise for her to listen to me and to then do more to prevent a vaccine injury in other children?

Years ago, I chose not to accept the diagnosis and the stagnant outcome it offered.  I preferred to do something about the loss of speech, the loss of skills, and the lack of education my child was receiving.  Hearing that other parents were successful in getting meaningful intervention for their children, I learned everything that I could about that.  Then, I demanded something - action!  Some of the people I consulted heard my plea.  Some of the therapies I was able to find (and afford) helped.  While hesitant to call what happened to my son a true vaccine injury, several medical professionals recognized that something happened to make my typical kid stop developing typically.  Pushing labels aside, a handful of people offered to get us on the right path.

The path hasn’t been straight.  It hasn’t been easy either.  My son has a form of autism that isn’t the kind that’s been portrayed on television or in those older, cherry “light it up blue” sorts of stories that used to air.  The autism he has is debilitating.  It’s restrictive.  It’s incredibly difficult.  Accepting that his autism diagnosis would define his capabilities would have been detrimental to his health.  Accepting it now could be detrimental to his future.  Given a bleak outlook by more than one of our specialists when this journey first began, I refused to let their words be the last word on the subject.  Long before the current acceptance campaign started, they were of the mindset that I should just accept the autism and be satisfied that “it is what it is”.  They were dispassionate, and some of them, in all honesty, were demeaning.  I ditched them, the supposed experts who wouldn’t help, and found other people who lifted us up and through the initial shock and worry of being told, “Well, there’s not much you can do.  Ronan’s going to be like this for a very long time…”

Sixteen years later, with all sorts of autism action in place, I’d love to have a recovery story to share.  But I don’t.  Ronan is still delayed.  He still hasn’t regained his ability to talk.  He still has worrisome, post-vaccination medical problems, too, like seizures that still have me researching.  I wish that things were different for him, and for me, but I won’t stop looking for help.  I won’t stop looking for answers.  I won’t ever stop reading other people’s success stories.  Those stories have carried me through and given me the chance to hope.  Some days, when therapies would fail, when supplements stopped working, and when our best providers moved away, hope was the only thing kept me going.

Even with how many issues the autism diagnosis brought, to accept that nothing more would change wouldn’t have been the best thing for Ronan.  Acting to close the gaps in his developmental was better.  Continuing to fight for useful services was wiser.  Bravely demanding appropriate treatment was worthier.  I’ll continue to act to make things just a little bit better for my son and for his future.  Wouldn’t you?

The endless world vaccine program is now being used as a weapon to basically enslave the planet to the liability free vaccine industry.

Like an Army one does not have to pay for, a virus can invade any country, and the governments are then told to provide billions for life saving vaccines as nothing else will work. There are no arguments of the science or lack of science allowed.

The pandemic will never be over, as there is too much money to be made from it, and the ability to completely control the population is simply another pleasant side effect.

Keep up the good fight Ms. Jameson. We will never go away! Our fight will continue. I am not sure if you all reside in Massachusetts or Connecticut, but I believe it was Connecticut's state government that wants to do away with the religious exemption. Buch of heartless animals! Appreciate what you and your family do for our community. Stay strong!
Blessings from Texas!

Cathy you are right that this year's April Autism awareness month was wiped out by all the attention and focus on the Corona virus pandemic. I have not seen one article about autism the entire month as this pandemic has gotten all the attention. However, we parents still are living with another epidemic called autism and have been in the midst of this crisis since the 1980s. We are still waiting and hoping for the researchers of autism around the world to finally find the answer and a CURE for our children's (mine is now an adult son) autism condition. They rushed to get the corona virus vaccines out to the public at warp speed and we are still left waiting and hanging in the wind for the miracle answer and cure for our children. How much longer will we have to wait for this to happen? Time goes by very quickly and we do not have forever to wait for a cure. Is anyone in the medical world listening to us and seeing our children year after year after year? I surely HOPE so!

I would like LakiKid (producer of Autism/Sensory products) to expand his product offerings.

I would also like him to create better OT/SLP products in both English and Japanese, instead of promotional T shirts romanticizing autism.

My heart hurts for disabled Japanese children who won’t be able to stay in Japan (near complete lack of special needs/autism facilities there, according to Nobita From Japan): https://youtu.be/fPL8PfibPrc

Where is the data on autism rates in Japan?

"Even with how many issues the autism diagnosis brought, to accept that nothing more would change wouldn’t have been the best thing for Ronan. Acting to close the gaps in his developmental was better. Continuing to fight for useful services was wiser. Bravely demanding appropriate treatment was worthier. I’ll continue to act to make things just a little bit better for my son and for his future. Wouldn’t you?"

Cathy … Our family would like to say AMEN to your closing comment. God bless you for your continuing effort to RESIST ACCEPTANCE of the raging EPIDEMIC OF AUTISM that has so ravaged our children, families and communities.