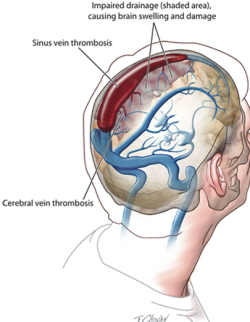 The following is excerpted from Dr. Meryl Nass' blog with permission.

The Astra-Zeneca "cheap and easy to store" "workhorse" vaccine causes blood clots in general, and in particular clots in the venous sinuses of the brain, which have killed or wounded a number of people, especially women under 55.

Disorders caused by blood clots, including heart attacks, vein thromboses, and strokes, are common. But the types of clots that may be linked to the AstraZeneca vaccine are exceedingly rare. They have been marked by low levels of platelets — the blood cell fragments that normally cause clotting.

The types of clots seen include cerebral venous sinus thrombosis, or CVST, a type of blood clot that occurs in the veins that drain blood from the brain, and a similar condition in the abdomen, known as splanchic vein thrombosis. The clots sometimes occur in combination with bleeding.

The European Medicines Agency, the European Union’s regulator, said it is investigating at least 44 cases of the rare brain clots and at least 14 deaths among about 9.2 million vaccinations in 30 European countries...

As of March 29, Germany’s regulator has reported 31 cases of the unusual blood clots in 2.7 million people vaccinated with the AstraZeneca vaccine, nine of whom have died.

The J and J vaccine was also associated with blood clots in the clinical trial data presented to FDA.  Both vaccines use an adenovirus vector to deliver DS DNA that codes for spike protein, and human cellular machinery produces this protein, for an uncertain period of time in uncertain quantities. So blood clotting may be due to the adenovirus vector, or to the spike protein, or to something entirely different.

The mRNA vaccines use mRNA to code for the spike, also using cellular machinery to produce the spike protein.  The end result of all 4 vaccines is similar, and again, we do not know for how long the body makes this protein.

If the spike itself induces clotting, which is a reasonable hypothesis scientists have put forth, but is unproven, then all 4 vaccines would be thrombogenic (induce clotting). Dr. Patrick Whelan tried to warn the FDA about this possibility, but was ignored.  He wrote:

Meinhardt et al. (Nature Neuroscience 2020, in press) show that the spike protein in brain endothelial cells is associated with formation of microthrombi (clots), and like Magro et al. do not find viral RNA in brain endothelium. In other words, viral proteins appear to cause tissue damage without actively replicating virus.

Is it possible the spike protein itself causes the tissue damage associated with Covid-19? Nuovo et al (in press) have shown that in 13/13 brains from patients with fatal COVID-19, pseudovirions (spike, envelope, and membrane proteins) without viral RNA are present in the endothelia of cerebral microvessels.

"In many if not most countries foreigners who are not permanent residents can have their rights reduced to those very basic ones mentioned in United Nation treatises which means not right to protest."

Just curious .. is it your opinion the US Constitution does not apply to "non-citizen" individuals in US and therefore are justifiably denied THEM by Justice Dept agencies?

"Pastor who stood up to police in viral video speaks out"
https://www.youtube.com/watch?v=uXefE-Z3H6M

The pastor grew up under communism and explains his reaction.

Here we go again with the far-right over using the term "Nazi" and "Gestapo" as someone mentioned in the comments. I agree asking for a warrant from a court is well within someone's rights This Pastor was from originally Poland so maybe he was not a Canadian citizen or even a permanent resident to give him the full rights to make such demands. In many if not most countries foreigners who are not permanent residents can have their rights reduced to those very basic ones mentioned in United Nation treatises which means not right to protest.

According to this article, Florida would ban vaccine passports for government AND private business.
"BREAKING: Ron DeSantis Announces Lawsuit Against Biden Admin, CDC, Doubles Down On Vaccine Passport Ban" https://nationalfile.com/breaking-ron-desantis-announces-lawsuit-against-biden-admin-cdc-doubles-down-on-vaccine-passport-ban/

As Christians, we must do what God calls us to do individually. I don't know that screaming and name calling is appropriate. However, telling them to leave and come back with a warrant is legally acceptable. The citizens are being pushed and stressed, so I am not surprised at more extreme reactions. Bad government gets bad results.

Here is the "You Tube purged" Round Table video led by Governor Rick DeSantis and Scott Atlas and 3 co-authors of The Great Barrington Declaration. Worthwhile viewing. They are positive about the vaccines, and don't mention the downsides or emphasize their experimental nature. However, they strongly discourage government mandated "vaccine passports." I guess pharma will rely on private corporations to fulfill that role.

Thank you for the links! The one of the Canadians in the restaurant screaming, “Get out!” at the Canadian Gestapo made my day, as did the other embedded link of the Canadian pastor screaming at and demanding that other Canadian Gestapo members leave his church! Amen and Amen again! Let us all seize such opportunities for civil disobedience when they arise, take courage, be bold, protest, and resist with all we’ve got!

Canadians push back against the "Covid health police"
https://www.wnd.com/2021/04/get-health-police-loudly-shouted-restaurant-yet-another-fearless-revolt/

Thank goodness!
We won't have to worry about Morgan Freeman hanging around us...

Just “...go get the freaking shots.”
or "...I have to avoid you."
https://www.breitbart.com/entertainment/2021/04/07/morgan-freeman-rips-people-who-dont-get-coronavirus-vaccine-i-will-avoid-you/

Wow!
The icing on the cake is the "UPDATE April 7" at the end of her article.