Home Donate Contact Us Special Reports Science Email Subscription 2021 RSS Feed 2021 Our Mission
Pi Day 2021 a Far Cry from when Autism Was In the Media in the 20-Teens
Deregulating GM: Obscene Farce of the Modern British State 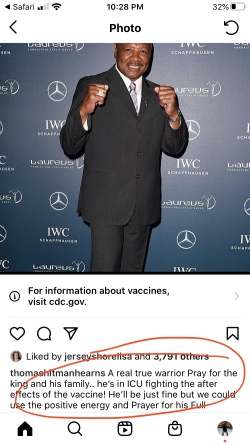 Boxing legend Marvelous Marvin Hagler died over the weekend causing a rash of speculation. Former opponent Thomas Hearns asked for prayers and said that Hagler was in the ICU following an adverse reaction to his Covid jab. His family later said he died at home "unexpectedly."

Hagler was 66 years old. I believe our own Dan Olmsted would have been 66 this year  himself.

Earlier this winter, baseball and civil rights hero Hammerin' Hank Aaron died just two weeks after his very public, on camera vaccination. He was older than Hagler, but said to have been in good health and also died unexpectedly. Two African American males, sports legends. In a normal world, experts would be rushing to discover if there was any correlation to the vaccination. We do not live in a normal world. Those of us in the autism vaccine injury community have known what millions of formerly naive Americans are now discovering. Vaccines, unlike the doctors who administer them, can DO NO HARM. Not by design. By edict.

AWARD-winning BBC radio presenter Lisa Shaw died in hospital after suffering blood clots after she received the AstraZeneca vaccine, her devastated family has said - with an investigation underway to see if there is a link between the tragedy and the jab.

How could such a powerful man succumb to such a tiny vaccine ?

Covered in blood, he knocks out Tommy 'The Hitman' Hearns in 1985 in the 3rd round. The ring doctor almost stopped the fight for Marv's safety since he was bleeding so bad from a cut near his eye. Then the ref stepped in to protect Tommy Hearns after he got up since he was so dazed...Marv would have killed him. My point is, the doc and ref protected these fighters. Where was Marv's doctor to tell him the truth about the covid vaccine ? The BIG LIE killed Marvin Hagler. Sorry to see you go man, you were something else.

Report from Italy stating all health and education workers should be vaccinated. I believe many will quit but so be it.

Here's the framing they are using:

“There have been no confirmed serious adverse events,” the spokesman said

...and never will be! Because how can you confirm them when you don't investigate them?

One would think that sometime TODAY, Dr. Fauci and a hospital administrator would provide the FACTS on Marvin Hagler's "last CV19 vaccine" and the ICU efforts.

There is no longer ANY PRIVACY in regards to the VACCINE STATUS or Americans.

I watched a video of Marvin about a month ago and he was doing panto lead role, and this is what he had been doing since retiring from boxing many years ago. If you didn't know he had been in the ring and at the dangerous level he was fighting at you wouldn't have guessed it. Big shock to see the champ go so suddenly.

Of course nothing to do with vaccines of course, of course of course NOT.

Surely .. if we have learned nothing else in our lifetime .. we have learned CORRELATION DOES NOT MEAN CAUSATION …. having heard that public health mantra for DECADES .. as we have watched our children regress into autism following vaccines .. from 1 in 10,000 steady declining to today's 1 in 35 …

In any event … it should surprise no one that literally thousands of deaths were blamed on COVID .. some say 80-90% … and .. we can rest assured NO DEATHS WILL BE BLAMED ON VACCINE.