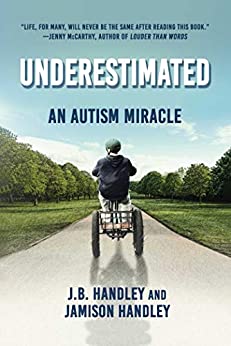 This video below from about one year ago, based on a study Eye-tracking reveals agency in assisted autistic communication Vikram K Jaswal 1 , Allison Wayne 2 , Hudson Golino 2.

As JB Handley and his son Jamison's book debuts next month, many naysayers will appear, some seeming to gloat over the impossibility of success for our pre/non-low verbal children, whether tots, teens or over 21. If that sounds jaded, I suppose it is. We're rarely allowed to bask in success.  No other lifelong, life threatening diagnosis gets this treatment. I heard a rumor that a major national autism group is lobbying to change April from Autism Awareness month to Autism Acceptance month. Check out the book Underestimated: An Autism Miracle from Skyhorse today.

About one-third of autistic people have limited ability to use speech. Some have learned to communicate by pointing to letters of the alphabet. But this method is controversial because it requires the assistance of another person-someone who holds a letterboard in front of users and so could theoretically cue them to point to particular letters. Indeed, some scientists have dismissed the possibility that any nonspeaking autistic person who communicates with assistance could be conveying their own thoughts. In the study reported here, we used head-mounted eye-tracking to investigate communicative agency in a sample of nine nonspeaking autistic letterboard users. We measured the speed and accuracy with which they looked at and pointed to letters as they responded to novel questions. Participants pointed to about one letter per second, rarely made spelling errors, and visually fixated most letters about half a second before pointing to them. Additionally, their response times reflected planning and production processes characteristic of fluent spelling in non-autistic typists. These findings render a cueing account of participants' performance unlikely: The speed, accuracy, timing, and visual fixation patterns suggest that participants pointed to letters they selected themselves, not letters they were directed to by the assistant. The blanket dismissal of assisted autistic communication is therefore unwarranted.

Yes, I agree that autistic people vary so much because vaccine-injured cases have varying amounts of brain damage.

I will read the book but I doubt it's relevant to my teenage autistic son. He's very verbal but has a low IQ and is emotionally only a child. But I also know several autistic children who are non-verbal and perhaps they really are trapped inside :(

We just ordered the book as soon as it became available. It arrived yesterday and I dropped everything else and plowed through the book in one afternoon. I wept through nearly the whole thing. God Bless this amazing young man and his family. I kept seeing my own minimally verbal adult brother in place of Jamie. Maybe there’s still hope for him after all ... there’s not much left to lose by trying.

Just another example of the SCIENTIFIC FACT the possibility of creating a ONE SIZE FITS ALL TREATMENT OR VACCINE IS NOT ONLY IMPROBABLE .. IT IS FAR MORE LIKE IMPOSSIBLE.

When S2C came out a few years back, there was a predictable troll response from Novella on one of his many blogs. He elided S2C with facilitated communication, threw out a bunch of half-truths and misstatements, and then pretended that a PA school district had refused to pay for S2C services requested by a family. (I looked up the administrative proceeding he mentioned, and it had nothing to do with autism or S2C. A family whose child has dyslexia had taken the child out of public school and put him in a private school using the Orton-Gillingham method, and wanted the public school district to pay for the private school tuition.)

The thing that Jamison's success highlights is that the medical community has shown no interest in diagnosing the specific damage people with autism have suffered. In the case of JB's son, it seems that the fine motor abilities are perhaps the biggest part of his challenges. That's why S2C works for him. Will it work for everyone diagnosed with autism? Probably not, because different people have been damaged in different parts of their brains.

Kudos to JB for doing the work the medical community hasn't bothered to do. I wish him and his son continued progress and success. Maybe this will turn on a lightbulb for at least a few MDs who have been mailing it in for too long.